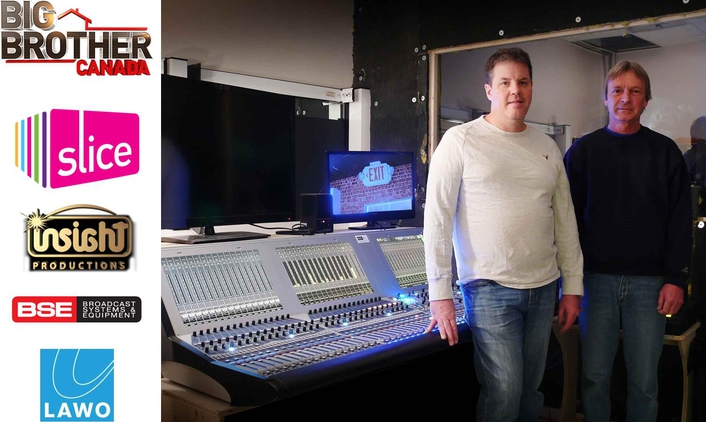 Kent Ford, Broadcast Audio Engineer (left) and John Carlyle, Sound Engineer (right)
When the second season of Big Brother Canada returns on March 5th, the setup behind the scenes must be ready for a perfect technical performance. The much more elaborate production setup for this season led Insight Production Company Ltd (Insight), entrusted with the shooting of the show, to go with Lawo technology to handle their audio production needs. The setup for this second season includes two Lawo mc²56 digital audio mixing consoles with fiber-connected stage boxes which allowed for completion of the technical installation in one day. The consoles, fiber cabling and analog breakouts were provided by Broadcast Systems & Equipment Inc. (BSI) and Lawo North America as a rental package, with configuration, training and setup support provided by Lawo North America’s Engineering Manager Doug Smith.

Insight Productions opts for new technology
Crucial reasons driving Insight’s decision to go with Lawo were based on the obvious ease of use and the great routing flexibility of the consoles—enabling not only the installation but also operations training for a group of nine audio engineers to run smoothly and be completed on a short timeline. Installation was straightforward and easy. The production was able to eliminate the previous year’s entire bulky, copper infrastructure with a couple of fiber connections. The inevitable last minute changes could then be applied with a bit of software-based reconfiguration and routing instead of rewiring the facility.

The decision to go with Lawo was made easier by the positive experiences of Shawn Hughes, Manager of Engineering and Operations, and Lead Audio Engineer Kent Ford who both have worked with Lawo equipment for MTV productions. Kent was hired by Insight Productions as audio design consultant to source and implement equipment needs, supervise the installation and train other operators. During the show he is one of the 10 audio operators and will be responsible for maintaining audio consistency throughout the run of the show. He also mixes the live-to-air weekly eviction broadcasts.  According to Kent, “Shawn and I previously installed the mc²56 at MTV Canada. Given our past experiences with their systems, we felt that Lawo was the best solution for ease of installation and operation and the ability to quickly and easily route and re-route audio signals. We’re excited to see how this platform will allow us to expand even further for Season 3.”

Special requirements for a special show
“What distinguishes the Big Brother Canada show from other productions is the massive use of inputs and outputs, requiring lots of processing power in the audio console. The show uses about 100 mics and outputs signals to eight multitrack recorders; and there are two live streams that output up to three different stories to follow, as well as a daily live-to-air show that streams to the internet,” states Kent. “Weekly we also produce two 1-hour taped shows, one 1-hour live studio show that includes all elements live from the house as the houseguests are evicted, and one 30-minute live studio show  all for the TV Network Slice™. The show is heavily dependent on an intercom system that provides communications amongst the various staff and is also used to move audio into the house during the show. Many ports of the intercom are routed through Lawo's MADI matrix to be used on air or recorded. The equipment needs to possess the ability to constantly and reliably adapt to the changing needs of the show as the weeks go on.”

There are 68 house plant mics, 10 crowd mics, and 32 wireless mics that are connected locally. The entire setup has about 140 mics and up to 120 cameras that will be on air 24/7 from the day the show starts on March 5th until May 8th.

Technological benefits
Kent adds: “A special benefit in the use of the Lawo consoles is the ability to manage signal flow to the many channels of recording used for three different story lines, as well as having the intercom interfaced though the available MADI ports. It’s reduced our cable needs considerably.”

Before turning to the final preparations for the production, Kent adds, “Last season of Big Brother Canada was the first to be produced in Canada. We had a lot to learn. There was so much copper, the consoles were undersized for the show, and the continuing changes in the daily requirements meant constant re-patching. The Lawo solution with MADI allows for easy connection and ease of operation with all changes now being accommodated virtually and not to be overlooked is the fact they are delivering outstanding audio quality for our production.”