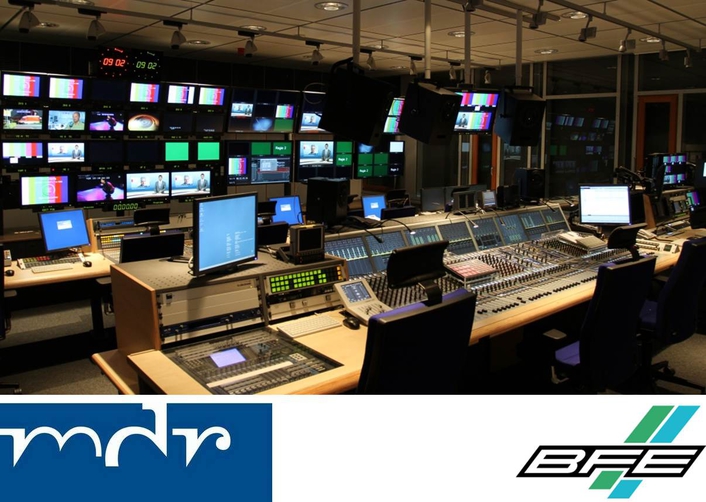 MDR relied on technical equipment which had already proven its quality in other operations
Over a period of 6 months, starting with acceptance of tender up to handing over of the turnkey solution to MDR on schedule at the beginning of September 2010 to MDR, BFE Studio und Medien Systeme GmbH renewed, as general contractor, the direction complex 2 for Mitteldeutscher Rundfunk MDR in Leipzig. This offers MDR another HD ready production complex at their TV headquarters in Leipzig. This infrastructure offers MDR the possibility of delivering HD programs flexibly in terms of production to ARD.

Initially Regie 2 will be deployed for the production of the MDR program, before being used as central element in ARD´s HD coverage of the coming winter sports. In spring 2011 direction 2 will be integrated into the regular MDR operation and utilized for the production of “Sport im Osten”, “Plusminus” and “Fakt” for ARD and “Hier ab vier” for MDR Television, the regional television program of MDR.

During the planning of the system, the area of video for a consistent processing in HD-format 180i25 played a particular role. External connections, which are still in SD, will be converted to HD 1080i25 for processing in Regie 2. In the field of audio, productions are possible in stereo and also in Dolby Digital 5.1. For source signals, which are available in embedded audio, signal guidance was realised as far as possible with embedded audio.

MDR relied on technical equipment which had already proven its quality in other operations. A central 3G-enabled video matrix GVG Trinix NXT 256x256 and a 3 level video mixer from Sony (type MVS-8000G) will be employed for the new direction 2. Furthermore, up to eight cameras GVG LDK 8000 Elite can be controlled. An Omneon Spektrum server, an EVS-XT2-system and a Panasonic HD video tapemachine is available for the playout. The Omneon server and the video tape machines will be linked centrally through the Clipjockey server from S4M. Chyron HyperXHD-Systems and Chyron ISQ playout systems were installed to meet the graphical needs of the direction. The HD infrastructure is provided by different modules of the Snell IQ series and the two-channel colour correctors from TCube. For the signal monitoring 9” and 24” monitors from TV-Logic, 17” monitors from Panasonic and for the first time the brand new PD47W series from Penta are being implemented, which are controlled by the central Evertz MVP Multiviewer with 96 entrances and 12 DVI exits. Quality monitors from Sony are used at the measuring desk and measuring instruments from Tektronix, RTW and DK-Technologies are in action.

Approved components are also used in the audio field. The centre of the system is a 56-channel sound mixer from StageTec – type Aurus, supplemented by the StageTec components Nexus and Starrouter. For a consistent signal routing in embedded audio, a StageTec Nexus matrix was directly integrated with 3G-enabled video modules with integrated embedders, and deembedders. A compact mixing desk, type DM1000 from Yamaha serves as a substitute mixing desk. RL series loud speakers from Geithain, are used for central monitoring in 5.1. Tapping components from Wohler and DPM are used at the different workstations for the local monitoring. The readings display is from RTW and DK-technologies.

The central control of the local matrices bar, monitors, audio mix desks and the MVP multiviewer system is taken care of by the router control system BFE KSC Commander. The process-oriented modules of the Snell IQ systems are controlled by BFE KSC Pilot Plus, which complements the KSC Commander. Furthermore the possibility is given to save, all production relevant data out of the above systems and the complete allocation from the monitor wall and vision mixer in so called salvos and use them for further productions. Graphic interfaces offer an easy and clear handling for the hardware controllers.

In addition to the tasks as a general constructor, BFE was also in charge of the design and the production of the studio furniture of Regie 2. This took place in close coordination with and according to the guidelines of MDR. The BFE studio furniture series NewLine, which already proved its ergonomic advantages in the project Regie 3, is now included. Regie 2 consists of three central time control tables for video & audio technology, a highlight editing desk, a commentator’s desk and a central video wall.