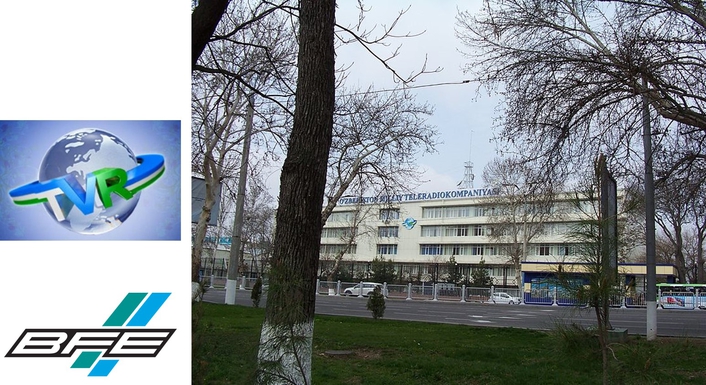 The National Radio and TV Company (NRTV), the central broadcasting institution of Uzbekistan, has awarded a contract to BFE including the complete overhaul of their broadcasting center and regional studios.

Germany-based international systems integrator BFE had, in the past, built several of the facilities that are in use today. With the new project, the existing SD technology will be migrated to a modern HDTV- / IP-based production environment. New workflows will address the increasing demand for content to be delivered to the people of Uzbekistan.

In Tashkent BFE will upgrade the MCR with IP-TV technology by Terracue, a SI Media broadcast automation system for 12 channels, as well as a Riedel intercom system, all while on air. 100 editor workstations will have access to a central archive with Harmonics storage, a robotic LTO tape-archive and a MAM system which connects the central broadcasting center in Tashkent to the 12 regional studios located in Navoiy, Samarkand, Nukuss, and others.

Editors at all studios will be able to access and share files via optical fiber connections, offering high bandwidths for maximum availability. The regional studios will also be equipped with automation systems and storage.

Three 5-HD-camera studios in the central broadcasting center will be added as well as two news studios with camera robotics and an adjacent newsroom accommodating 60 clients. Ross virtual solution components will be used for building a virtual set.

Additionally, the current media center will be extended by four camera systems.

Finally, the project includes upgrading the mobile production units as well. Two existing OB Vans will be extended by two camera systems each.

Jürgen Loos, Director of Sales & Marketing at BFE says “NRTV has been one of our prime customers for many years now. We take pride in delivering unique solutions with highest standards in quality and service. This is why our customers make us their first choice and this is why we are proud to be chosen again by NRTV to upgrade their infrastructure. We are looking forward to the project and to working together with the NRTV team.”

The National Radio and TV Company (NRTV) is the central state-owned television company operating 14 nation-wide channels and 12 regional channels. Headquarters are based in the capital of Uzbekistan, Tashkent. Regional studios are spread all over the country.

BFE Studio und Medien Systeme GmbH is a manufacturer-independent broadcast systems integrator with more than 40 years of experience in the planning and implementation of complex projects in the field of broadcast and media technology. As an expert and reliable partner, BFE supports customers in Europe, Asia, North Africa and the Middle East in the implementation of tailored solutions for their specific requirements. As a manufacturer of its own KSC product line, BFE markets control and management solutions for the professional television and radio industry. The BFE branch in Dubai Studio City supports activities in the GCC region.