Beyond Switching and Extending

New ways of combining KVM products and broadcast Multiviewers
Combining KVM products and Multiviewers now offers users new ways to operate computers via split screen. This new approach is a great basis for the cooperation between Guntermann & Drunck and Apantac LLC. Just like Apantac’s devices KVM equipment from Guntermann & Drunck is mainly used in studios, OB vans or in post-production. As a manufacturer of high-quality Multiviewers, video walls and solutions to transmit signals, Apantac’s products are employed in studios all around the world. The equipment can be easily combined with KVM extenders, switches and matrix switches.

This solution lets users in broadcast create multi-monitor workstations for various applications requiring only one keyboard and one mouse to operate all connected computers.

1 + 1 = 3
G&D presents an example of how to turn synergy effects into solutions that are worth more than the sum of their parts. Apantac’s Multiviewers display multiple video signals from different digital and analogue video sources on one single screen. By combining G&D products like KVM extenders or KM TradeSwitches, users in studios can operate different computers via split screen and access all connected computers with only one keyboard and one mouse. A split screen is divided into multiple parts that display images or video sequences from multiple computers at the same time.

Creating synergy effects or how to combine Multiviewers with TradeSwitches
In broadcasting, being able to monitor all on-air applications is just as important as extremely short reaction times. Multiple data sources must be monitored at the same time. And if necessary, users need to be able to immediately access the active stream. That’s why all remote computers must be available within seconds via one keyboard and one mouse.

Luckily, that’s not a difficult task for Guntermann & Drunck’s solutions. Usually, valuable computers are removed from the studio and placed into separate, air-conditioned equipment rooms. The server reack holds G&D’s TradeSwitch, which accesses the standard keyboard/mouse interfaces. In addition, one of Apantac’s Multiviewers is placed in the rack as well. All video interfaces are connected with the device. Now, the keyboard/mouse as well as the video sequences are separated. With the help of KVM extender systems, for example a DVIVision (DVIVision-CPU & DVIVision-CON), computer signals are bundled and extended over distances up to 150 m. 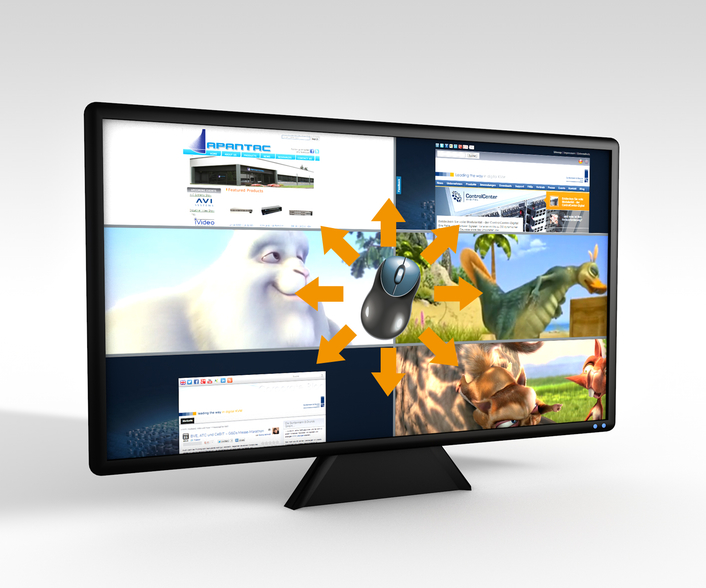 CrossDisplay-Switching – a new way of switching via mouse
The user module DVIVision-CON is connected to the remote console and operates the computer remotely. The result: Multiple video streams are simultaneously displayed on the split screen and different applications can also be monitored at the same time. With integrated CrossDisplay-Switching, users can now switch between channels simply by moving the mouse. The mouse acts as if on a “virtual desktop” and can be moved seamlessly across the connected displays. By moving the cursor from the active to another display, the keyboard-mouse focus automatically switches to the connected computer. Thus the mouse turns into the ultimate switching tool.