BEXEL with Lawo Audio and Video Equipment in Russia and Brazil 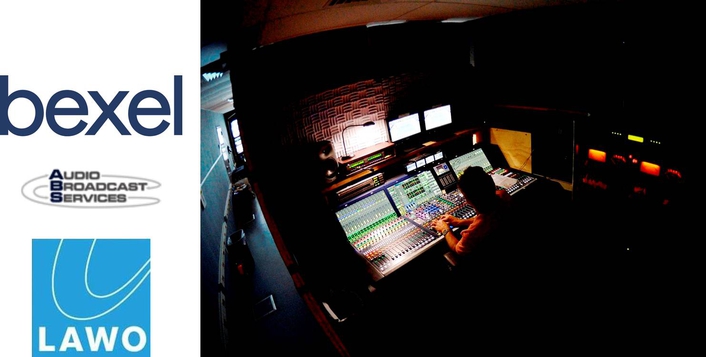 New fly pack concept with Lawo provides solutions for future remote broadcast production
Bexel, worldwide provider of broadcast services including video and audio equipment rentals, announced that it will apply Lawo’s audio- and video-over-IP networking technology for this year’s prominent international sports events in Russia and Brazil. The confidence in the use of Lawo equipment and services derives from experiences in the last year where Bexel, Lawo’s North America team and Lawo’s rental company ABS (Audio Broadcast Services) designed and approved a flexible fly pack solution for sports production.

Bexel’s new systems have been utilized successfully at the US Open, where the company was tasked with supporting CBS international broadcast feeds, followed less than one month later by the PGA Grand Slam of Golf for TNT originating in Bermuda. “Bexel’s Lawo-equipped fly packs are designed specifically for events where the infrastructure does not allow for large OB vans or to provide optimized production facilities,” states Johnny Pastor, Bexel Project Manager. “The smooth transition between New York and Bermuda venues was made possible due to Lawo's ability to intertie multiple audio sources and formats, including both baseband as well as audio- and video-over-IP, across a common network platform utilizing both MADI and RAVENNA solutions for multi-channel interconnectivity. At the same time, Lawo was able to offer console surfaces, core routing systems and stage boxes configured for a broad range of I/O and routing configurations, with industry-leading redundancy and reliability, as well as the ability to manage on-site modifications by switching from one production to another with the touch of a button.”

Host Production with Lawo Technology
Bexel has been deeply involved in the US Open for years as rental supplier, furnishing international control rooms and more. To support host broadcaster CBS in managing the worldwide feed for both picture and sound, control rooms for courts 1 and 2 were each outfitted with a 48 fader Lawo mc²56 MKII to supply the international feed in stereo. Two additional crowd microphones were supplied for broadcasters who wanted the ability to produce in surround. The overall system configuration consisted of a Lawo mc²56 mixing console and a DALLIS (Digital, Analog, Line Level Interface System) frame with the analog I/O linked to the console's HD Core using RAVENNA over a single CAT5 line. Signals were integrated seamlessly into the event infrastructure, as the Lawo routers were able to supply any signal in AES, analog or MADI formats.

Pastor adds, “Operators were impressed not only with how good the Lawo consoles sounded, but also with ease of operation, requiring only a short ramp up for those who had never worked a Lawo console previously, and the ability to build custom setups on the fly—tailored to each operator's unique requirements and preferences.”

In addition to satisfying the audio requirements, two V__pro8 units, Lawo's newest video product, were utilized for the embedding audio streams into the world feed. The crew was enthusiastic about the devices as they provided embedding for 16 SDI feeds and extensive flexibility to manage multiple streams (both audio and video) within only a 2RU footprint, replacing an array of equipment previously used for audio and video processing.

Lawo at The PGA Grand Slam of Golf
After a successful US Open Tennis Event in New York, the next stop was the PGA Grand Slam of Golf, an annual off-season golf tournament contested by the year's winners of the four major championships. The event takes place on Bermuda, where the local infrastructure and geography presented a number of significant challenges. The streets on Bermuda were too tight to deploy a TV truck for the event, so a flypack solution was designed and built up by Bexel; efficiently re-packaging the Lawo system for the boat ride to Bermuda. In addition to the flypack rigs, all of the venue's audio infrastructure equipment was contracted to ABS and as a result, was along for the cruise to Bermuda as well.

Audio Infrastructure and Production Concept
The show was produced in 5.1 surround sound with a Dolby E transmission. Besides the higher channel count, being flexible in connectivity was a main reason for the decision to go with Lawo for both the audio consoles as well as the routing and I/O infrastructure. On the operational side there was a demand for some special features. The Lawo Audio-follow-Video function was used for seamlessly flying in graphic sound effects as well as providing automatic delay compensation switching between local and RF cameras. The challenges were easily solved by a combination of A-f-V, a multi-purpose GPC function and an external GPI trigger. All this could be done without special configuration by the operator using Lawo´s custom functions.

The show also used two Lawo mc²56-MKII audio mixing consoles with 48 Faders. One console was used for sub mixing all effect microphones. The second console was used to create an integrated mix of DigiCarts, EVS, Announcers, and the effects mix. The interlink between the consoles was done via MADI, as well as the connection to the video router and the production monitoring system. All signals in the field where collected using a total of seven DALLIS frames interconnected to the mixing consoles using RAVENNA. Most of the DALLIS frames were used in proximity to the flypack and connected with CAT5 except for the announce booth, which was interconnected using a single mode fiber link.

Lawo V__pro8 Video Processor
In addition to the Lawo audio systems, V__pro8 video processors were also part of the fly pack. One V__pro8 received a MADI feed from the main console and was used for embedding audio into the transmission feed, while a second one was used to delay the MADI stream feeding the production speakers to maintain synchronization of audio feeds throughout the venue's various production areas.
The combination of Bexel's experienced and professional staff coupled with the advanced design of Lawo's product range and support from ABS and Lawo personnel on-site enabled a forward-looking approach to these annual events, presenting a range of exciting new concepts for efficiently managing remote sports productions in even the most challenging locations and circumstances.

About Bexel:
Bexel is the pre-eminent worldwide provider of broadcast services including video and audio equipment rentals, fiber services, new audio sales, used equipment sales, and repairs/maintenance. Bexel provides brilliantly designed and flawlessly executed systems and solutions to all customers – including producers of the biggest and most important televised events in the world

About ABS
As a professional and internationally experienced rental company, Audio Broadcast Services (ABS) specialises in hiring out audio systems and associated services for international broadcasting applications. Created by Lawo to address the need to supply systems on a rental basis for global events, ABS was formed in and has since provided equipment and services to multiple broadcast networks for events ranging from the summer and winter games to the World Cup and Formula One telecasts.  The company routinely provides Lawo consoles and routing systems that are in high demand for these types of events to address a wide range of demanding applications.
Depending upon your requirements, systems are delivered ready for use, installed on-site, and your employees can be trained and supported during the event.

About Lawo AG
Lawo designs and manufactures pioneering audio and video technology for TV and radio broadcast production, post-production, as well as live performance and theatrical applications. Products include digital audio mixing consoles, routers, video processing tools as well as IP-based video and audio transport solutions. All products are developed and manufactured according to highest quality standards at the company’s headquarters in the Rhine valley town of Rastatt, Germany.

Sochi 2014: FUJINON Tech Support Center in Place
Major Project for ChainMa...t the Olympics in Sochi
NBC Olympics to Use Five ...for Winter Games in Sochi
Sochi ‘Ready and in Olympic Mode’