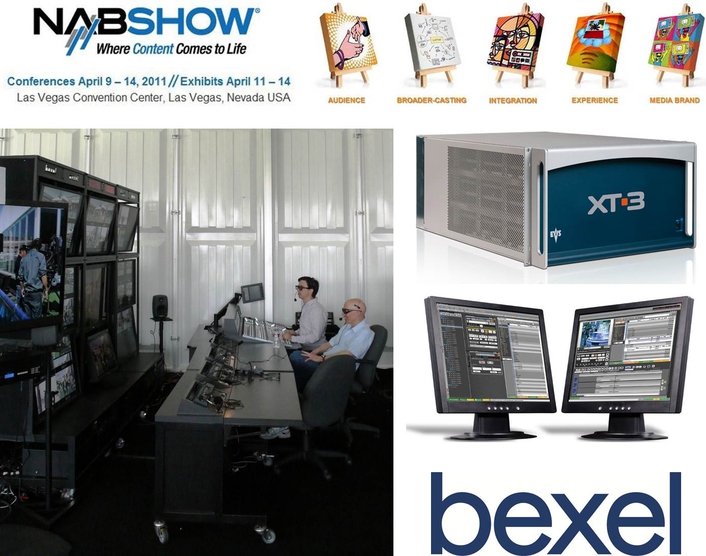 Beginning this summer, Bexel will offer clients the third and next generation EVS XT servers, which have quickly become the industry standard of production playback servers. The XT3 offers up to eight channels as well as the enhanced speed and reliability of Solid State Drives in its redundant storage array. Best known for its proven compatibility with several control protocols and its ability to record in multiple popular third-party codecs, the new XT3 includes enough capacity to support two SuperMotion streams per mainframe and up to six channels for 3D/Dual Link applications. In addition, the XT3 includes physical ports for modular storage expansion.

“Upon learning about the capabilities of the latest EVS XT server, we immediately recognized how easily the XT3 translates into increased power and flexibility in any production environment for our clients,” says Craig Schiller, vice president and general manager of Bexel. “The new XT3 production server combines the world-class speed and reliability we have come to expect from EVS, along with new features enhancing its capability and performance.”

In addition to purchasing the new XT3 equipment, Bexel has also upgraded its IP Director Media Management Workstations, an integrated suite of software applications that allows the management of audio and video in live, near-live and any studio production environment, which now features the Intel i7 processor. Whether in a production studio, on a large scale remote broadcast, or at a post-production house, the IP Director Software suite creates a powerful front end interface for a network of XT Production Playback Servers. The application offers a gentle learning curve for users and provides an assortment of tools for working with large-scale digital media collections. This ultimately makes researchers and production staff far more efficient as they organize, filter and review assets with the confidence that they've found the best clips available to them for a given project.

“What very well might be the most impressive feature to our clients is that this high-speed platform enables the user to watch real-time playback of high-resolution video over the gigabit Ethernet browsing component, or IP Viewer,” adds Schiller. Other improvements include the addition of a second GBE network interface port which is team-able for maximizing bandwidth for high volume traffic.

Bexel is the pre-eminent worldwide provider of broadcast services including video and audio equipment rentals, fiber services, new audio sales, used equipment sales, and repairs/maintenance. Bexel provides brilliantly designed and flawlessly executed systems and solutions to all customers – including producers of the biggest and most important televised events in the world.