The significant investment is strategically aligned to support Bexel’s continuing expansion into the major global sporting event sector. “Bexel has had an incredibly busy year,” commented Tom Dickinson, CTO of Bexel. “We came right off doing the winter games in Sochi, Russia, directly into World Cup preparation. This was the largest World Cup effort that Bexel has ever undertaken, as we provided complete turnkey facilities with on-site technical support to two major broadcasters. To support these live events that are international in scope, we invested millions to expand our systems and solutions so that we can service our clients with the technology they require to execute at this level.” 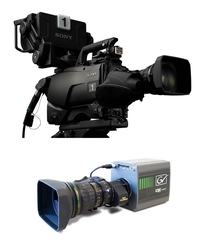 Grass Valley and Sony Camera Systems
Bexel has made a significant investment in the expansion of its camera inventory. Over 50 new camera systems were purchased to support Bexel’s increased servicing of global sports arenas. Thirty Grass Valley LDX 80 Compact cameras and 20 Sony HDC-2400 cameras have been added to the Bexel roster. All 50 camera chains were used in Brazil.In addition to the cameras, Bexel bought more than 50 supporting lenses, ranging from wide-angle lenses to Cannon XJ95x and Fujinon XA99x8.4 super-telephoto lenses. The company’s inventory of camera support equipment has also grown, including new Vinten Vector 75 Pan and Tilt Heads and Sachtler tripods.

Evertz Routers and Grass Valley Switchers
Bexel has undertaken a major upgrade of its routers and increased the quantity to include two new Evertz EQX routing systems from 288x853 up to a full size 394x970. In addition, Bexel has an Evertz EMR router at 288x864. These routers are central to the company’s support of its large systems and bigger than what would be found on many mobile trucks.
“The World Cup, being such an expansive event, required host broadcast facilities to have very extensive routing capabilities to manage the signals coming in from all the venues simultaneously,” said Dickinson. “This routing of the signals was one of the key requirements, due to the complexity of the event and the large amount of content being managed in a given time period. To support that, and to ensure that both networks had maximum production flexibility, we upgraded our router fleet with two additional, high-end EQX systems, both of which were deployed in Brazil.”
Two new 5M/E Grass Valley Kayenne Video Production Centers were also acquired, for an inventory total of six production switchers. “We’re continuing to invest in Kayenne switchers, as we build out our flypacks to support massive global events like Sochi and the World Cup,” stated Dickinson. “We were able to do both US host facility installations with all Grass Valley Kayennes, which worked perfectly. We had four of our switchers in Brazil with a total of five control panels. 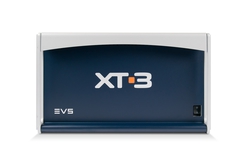 EVS XT3 Video Servers
Bexel has also upgraded and expanded its entire fleet of EVS servers, as well as acquired a host of EVS support products. With the $5 million purchase of 25 new XT3 video servers, Bexel now has a deployable fleet of more than 50 XT3 units. The servers range from six-channel to eight-channel units, and include a new 10 gigabit Ethernet networking feature that allows users to move files over an IP network much more efficiently.
Both U.S. host providers used Bexel’s EVS XT3 servers in Brazil. “The XT3s were crucial to the systems we set up in Brazil,” noted Dickinson. “Both broadcasters’ workflows were file-based and very EVS-centric. The EVS XT3s were key to how the large amount of content was managed from all the World Cup venues.”

To service U.S. hosts’ coverage over the course of the entire month-long tournament, Bexel transported approximately 26,000 pieces of equipment and 35 senior engineers and support staff to Brazil.
The Spanish-language rights holder for the U.S., broadcast extensive coverage from Rio de Janeiro in addition to the actual World Cup matches. The Bexel set-up served as the hub supporting their extensive pre- and post-game coverage and entertainment broadcasts of its morning show from Copacabana Beach, and the rooftop of the Atlantico Sul Hotel.

“We put together a total of five control rooms on site in Brazil, and everything worked seamlessly,” concluded Dickinson. “The extensive investment we made for the World Cup has positioned Bexel to be able to handle any major sporting event anywhere in the world, with the highest quality of well-built systems. We are already looking forward to upcoming events, and we’re confident that this investment will allow us to continue supporting our clients with both the strongest systems and the smartest solutions available.

”Bexel will also utilize the new broadcast solutions and equipment on upcoming telecasts of the U.S. Open, NCAA Football, MLB, and the NFL, as well as other live events.