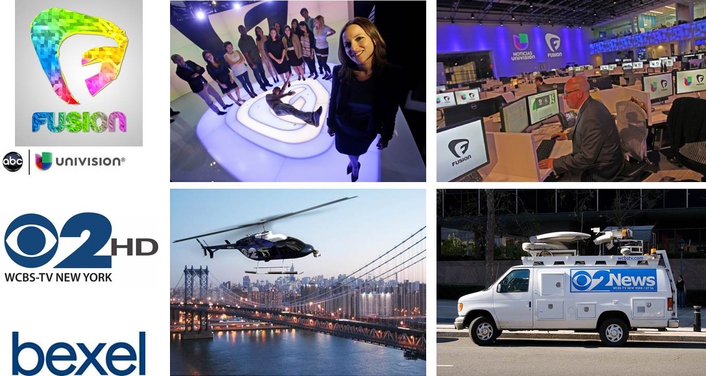 Fusion, a joint venture between ABC News and Univision, launched October 28. The English-language network features news, information and lifestyle programming aimed at Latinos and young Millennial viewers. Bexel was contracted by The Systems Group to provide complete RF system integration for the new facility that was built from the ground up to support Fusion, as well as Univision’s news programming. The entire process, from the planning stages to final installation, took nearly a year.

“It is always a tremendous opportunity when we can get in on the ground floor of a project,” says Jim Dugan, senior project engineer, Bexel. “With Fusion’s new studio, we were able to start with a blank canvas, and our experts were really able to configure a system that was right for their specific and varied needs. Beyond consulting on all the RF in the facility, we provided project management, frequency coordination, bandwidth planning, and equipment purchasing as well.”

For WCBS-TV studios in New York, Bexel recently upgraded the MAS for this market’s top-rated news station, which is also home to local area talk show “The Couch.” The system allows talent to roam from their home studio, CBS Studio 46, to the adjacent newsroom and the soon to be completed Studio 55. The wireless antenna solution at WCBS accommodates 16 Sennheiser wireless microphones, eight Lectrosonics IFB systems, and two Telex BTR800 Wireless Intercom systems on a single, four-zone system.

WCBS is located in the CBS Broadcast Center, a million-square-foot production facility in Manhattan that serves as the headquarters of CBS News and CBS Sports. Over the last two years, Bexel has also installed Managed Antenna Systems in all five of the complex’s other studios.

“We are proud to continue our work at the CBS Broadcast Center. With our Bexel MAS installed in Studio 46, the WCBS news team is going to enjoy a whole new level of flexibility and freedom. Our RF configurations streamline audio communications for the production workflow.”