Betamobil Comes Back to ATEME for More Contribution 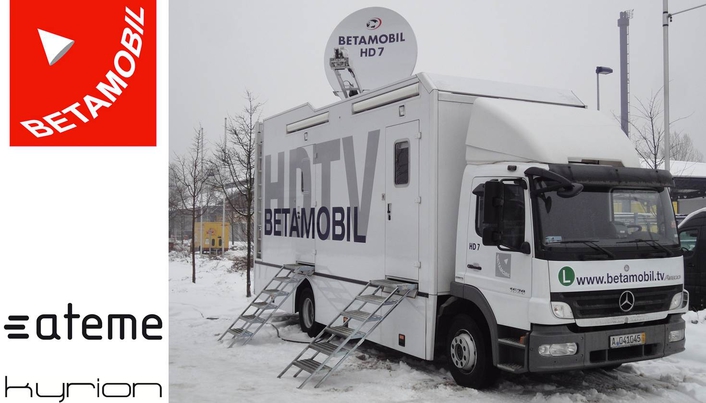 “Our decision to stay with ATEME to equip our new vehicle was very easy and clear cut, as they win out on all the critical points,” said Betamobil CEO Michael Hermann. “Reliability is crucial for our business providing live broadcast services, and we have had notably few problems with our existing ATEME equipment in two years. And when we did call in for support, the response was always immediate.”

Interoperability is also vital given that Betamobil has to serve multiple broadcast clients with a range of different contribution technologies of their own. “Compatibility of the system with all other manufacturers was a key requirement,“ said Hermann. “We have had no problem transmitting over the past two years with ATEME, and have started to use the devices for HD transmissions with Sky in Champions League football, as well as for ARD, ZDF, Arte, and Phoenix, along with other German and international television stations.“

Another major consideration for Betamobil in its choice of ATEME was future proofing, since in its business of providing satellite news gathering capacity on demand for multiple clients, it must be able to support the latest encoding technologies that may be required. "For us, it was clear that H.264 10-bit technology will be used sooner or later on the market, and ATEME already supports that.“ said Hermann.

The Kyrion encoders and decoders were supplied by ATEME’s German partner GMDS-Germany GmbH, which supported the installation, set up and testing. The equipment comprised the ATEME Kyrion CM4101 encoder, and the DR8400 decoder. The devices offer IP and ASI/L-Band interfaces, enabling transmission over either satellite or IP networks at up to 150 Mbps.

About Betamobil
Berlin based Betamobil has been offering TV services since 1994, specializing in Outside Broadcast events and particularly sports and news. Broadcasters such as ARD and ZDF use Betamobil’s DSNGs for occasional events or one off news coverage. Betamobil supports HD live production in Dolby 5.1, recording with up to 20 cameras, with provision of EVS including networked nonlinear editing positions at the production site or an EB team, as well as satellite transmissions, DVD productions and video projections. Beta Mobile has two HD OB vans and five DSNGs.