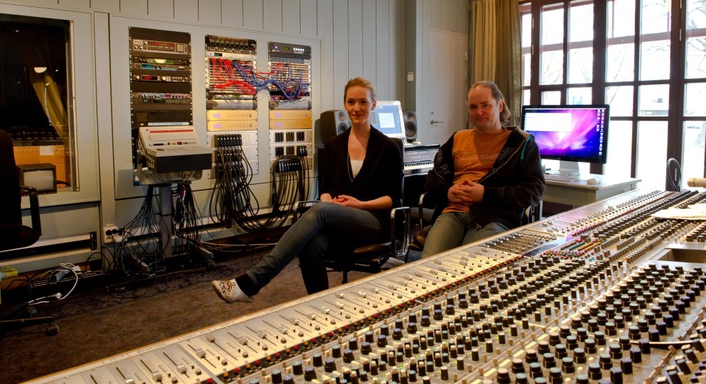 Linn Fijal and Bernhard Loehr in the RMV control room. r
Benny Andersson's Riksmixningsverket (RMV) recording studio has chosen NTP DAD AX24 ultra-high-quality analog-to-digital and digital-to-analog converters for its newly completed premises on the Stockholm waterfront. Four NTP AX24 systems have been delivered. Each incorporates a PHD interface for Avid Pro Tools and will be  used in conjunction with a 64 channel Neve 8068 analog mixing console.

"With all the vintage musical instruments available in the studio it is very important to be able to record with a clean and natural warm analog sound, which is exactly the quality we get from the AX24," comments studio engineer Bernhard Loehr.

"It is important to have very reliable high-end gear and a very high-end system," adds studio manager Linn Fijal. "The DAD AX24 AD/DA converters should not be noticed in the sound. In fact the AX24 should only be seen with its nice gold face-plate!"

RMV is jointly owned by Benny Andersson and his son Ludwig. Recordings have already been made in the new facility by the Benny Andersson Orchestra, various jazz ensembles, Swedish garage rock band The Hives, and background string orchestras. Benny Andersson is a musician, composer, a former member of the Swedish musical group ABBA (1972-1982), and co-composer of the musicals Chess and Mamma Mia!. He is currently active with his own band and was executive producer for the film version of the musical Mamma Mia!.

"RMV is a very pleasing addition to the list of DAD AX24 users which includes many of the world's most quality-conscious recording studios, broadcasters and concert venues," adds NTP Technology Sales Director Mikael Vest. "The audio market's present infatuation with compressed file formats such as MP3 will undoubtedly be followed eventually by much cleaner distribution media. The DAD AX24 enables audio engineers to future-proof their master recordings and to achieve the cleanest possible postproduction quality."

The NTP DAD AX24 is based on a high-quality converter using a 5 bit delta sigma modulator. It offers A/D and D/A conversion in PCM up to 384 kHz, DSD at 64fs or 128fs, and DXD at a sampling-rate of 352.8 kHz. Analog in and output channels can be expanded in pairs, allowing configurations such as two or four analog input channels and six analog output channels for Dolby 5.1 mastering.

Optional DAD-I/O modules providing interfacing for commonly-used PCM formats up to 96 kHz. An 8 channel AES3 module allows interfacing of 192 kHz and 384 kHz digital audio on a multiple wire interface. The optional MADI interface can be configured to operate in a daisy chain for connecting additional converters to the same MADI link. The MADI interface and the converter can be set to access any of up-to 64 MADI channels in blocks of 8 consecutive channels.

The AX24 is fully remote controllable via RS-422, USB or Ethernet. An optional DADman control utility provides various control interfaces for Mac and PC. The microphone preamplifier controls can be represented on the channel strip of major consoles, and various digital audio workstations, including Avid ProTools HD.