Hidden champions are middle-sized companies with high economical potential – potential most people in the region are not aware of. As leaders at the market, these niche suppliers have gained and developed their knowledge and experience over many years. The Chambers of Industry and Commerce (IHK) of German cities Arnsberg, Hagen and Siegen made it their task to find these hidden champions. In their analysis, the committee regarded Guntermann & Drunck as one of the region’s hidden champions.

Germany’s ambassador in the world
In June 2013, Guntermann & Drunck participated in the Day of world market leaders in Hemer. “Germany has more world market leaders than any other country.”, confirmed Foreign Minister Guido Westerwelle while visiting the event. “Although they are often unknown to the general public, these companies are essential to the industries in which they operate.”

Now the Board of the Siegen Chambers of Industry and Commerce officially awarded Guntermann & Drunck with the certificate “World market leader and top performer from South Westphalia”. Therefore, Hermann-Josef Droege, Vice CEO, responsible for the areas of regional economic policy, taxation, innovation and environment at IHK Siegen, named Guntermann & Drunck one of the region’s hidden champions. 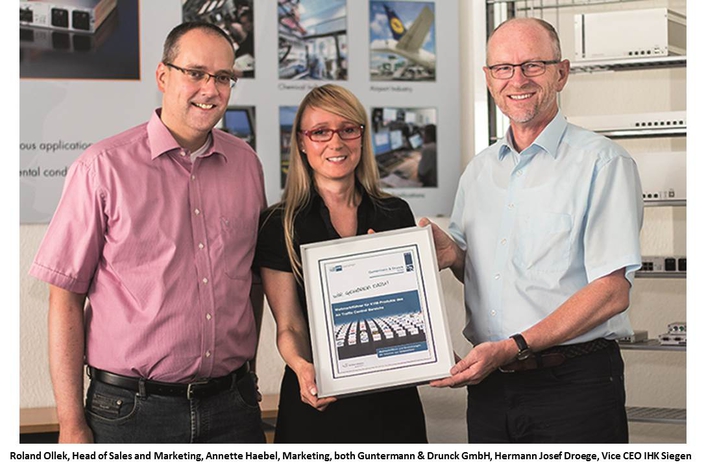 Guntermann & Drunck develop their innovations in close cooperation with their customers’ requirements. However, this approach only works when listening to customers as G&D does every day.

10 Trade Shows, 9 Countries, 6 Industries
Every Bit You Share via KVM is a Saving
TopVision HD Ü5.1