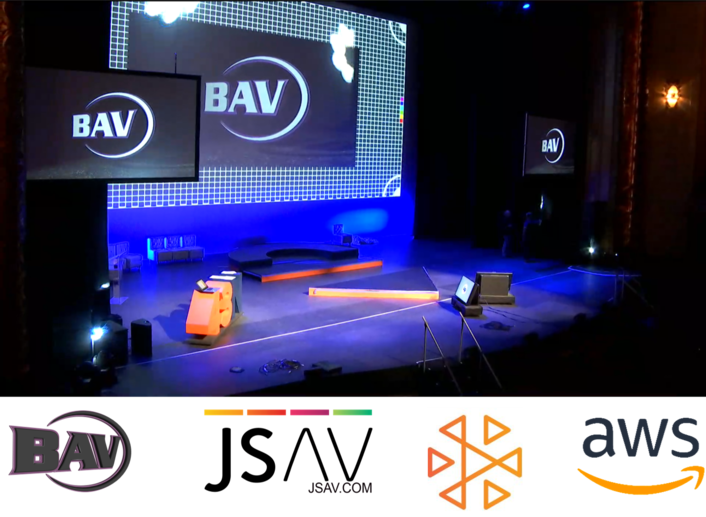 Our focus is on speaker comfort and creating a virtual experience that mirrors what they’re used to. That means making sure they’re not worried about tech,” noted Girling

BAV, a JSAV Company, is a full service live event production company that has been providing turnkey audio and video workflows for large-scale conferences and events across North America for more than three decades. While the company has increasingly incorporated virtual content into its live productions, the events of 2020 challenged BAV to rethink its offering. It had to quickly find a way to help clients translate sizable in-person gatherings into virtual events. Challenged to quickly scale its streaming capabilities to host and deliver these events live online, and with limited technical staff, BAV looked to Amazon Interactive Video Service (Amazon IVS).

“Live streaming has long been an aspect of our productions as organizations have looked to extend their audience reach, but all of a sudden, with all in-person events cancelled, it became the central focus. We needed to be able to scale from managing three or four streams per event to orchestrating hundreds of high-quality, low-latency streams, often simultaneously,” said BAV Senior Developer Andy Girling. “As we began looking for a solution, we came across Amazon IVS, and the turnkey nature of the solution has been phenomenal. Setups that previously took half a day can now be accomplished in two minutes. It’s made our delivery far simpler.”

Previously, the streams that BAV supported were intended to extend presentation reach to remote audiences, so a small degree of video lag wasn’t a problem. But with a full virtual format requiring interactive elements such as Q&As, latency became a major consideration. The team also had to be mindful of how to reach globally disparate audiences accessing content from a range of devices and with varying network connectivity. “The adaptive bitrate feature of Amazon IVS is key for us. Much of the content we’re producing is in a presentation format, but we provide engagement via live chat, polling, and Q&A so low latency is very important to ensure questions are moderated and answered in a timely fashion,” Girling explained.

All aspects of AV production for each event are handled from new purpose-built broadcast studios and control rooms across BAV locations in Dallas, San Antonio, Houston, and Denver. Presenter streams are typically fed into a BAV studio based on program preference, whether Zoom, Skype, WebEx, or another video conferencing tool. For programs containing more private or sensitive information, BAV has also built a secure reliable transport (SRT) site for presenters to use. Much like an in-person production, presenters are brought into a virtual green room to prepare and undergo a tech check, including lighting and audio. A stage monitor allows the on-deck presenter to view current activity, parallel to an in-person event. When it’s their turn to present, BAV prioritizes their feed, moves it through the vMix video mixer, and pushes the content out to viewers via Amazon IVS. IVS then distributes the content to the virtual meeting site that BAV created, and viewers logged on to BAV’s event site can then access and interact with the presentation in real-time.

“Our focus is on speaker comfort and creating a virtual experience that mirrors what they’re used to. That means making sure they’re not worried about tech,” noted Girling. “With Amazon IVS, we never have to worry about where the feed is coming from or managing bandwidth and bitrates. It’s become a one-stop shop for our broadcast delivery services.”

Girling concluded, “We’re heavily invested in AWS here, and have a lot of engagement with the Amazon IVS and AWS Elemental MediaLive teams. It’s nice to be able to collaborate with them, and understand and provide input on features coming down the pipeline so that we know where to invest our engineering resources. Even when we shift back to in-person events, this new virtual paradigm will persist and there will be continued demand for high-quality remote technology like AWS.”