Barnes and Thatcher Rely On Hog 4 For The Big Screen 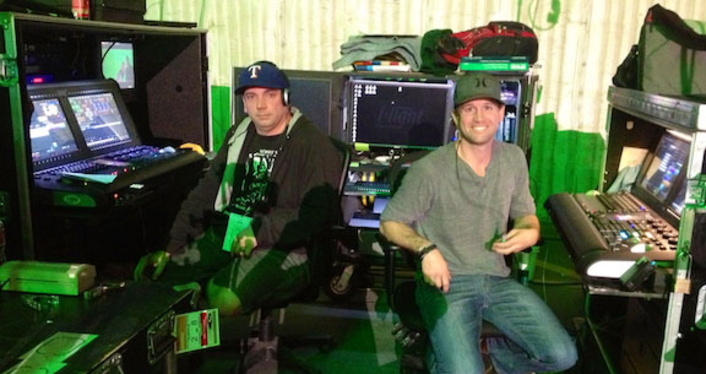 Scott Barnes and Joshua Thatcher: The Dynamic Programming Duo Go 'Full Tilt Boogie' With Hog 4 Control
Scott Barnes and Joshua Thatcher are two of the top moving light programmers for the motion picture and television industries; while they do work individually, the dynamic duo often work together on projects, bringing their unique synergy to streamline the world of film production. Upon the release of the Hog 4 control platform, Scott and Josh immediately purchased new Hog 4 consoles to augment their production inventory.

Barnes comments, "We got our Hog 4 consoles in November of last year, and we were fortunate to get some of the first desks on the west coast. From November to March, we used the new desk for commercials and re-shoots, so by April when we started Captain America 2, I was really comfortable with the Hog 4 and ready to go 'full tilt boogie'.

"I think it's no surprise that the speed of the desk is much faster; that and the enhanced touch screens are the biggies that everybody notices. When I first got my hands on the Hog 4, I saw potential … you can see where this platform is going, and it's already happening with the last two or three updates. One of the big changes with the Hog 4 was in the architecture of the software; it's allowing High End Systems to upgrade the desk and give it new features much faster. Each time I use the Hog 4 I find new ways of laying out my screens; there's just so much touch screen space at my disposal. It depends on the show and what kind of fixtures we have, but the nice thing is that I have the real estate to do what I want, without adding an extra monitor."

Thatcher adds, "The Hog 4 system is now even more incredible with the facility of the User Kinds, and the enlarged touch screens are very attractive. Being able to use full touch screens and encoders - and have them work absolutely - is great for someone with my 'mouse point and click' origins. I use the third screen as my 'dump' screen for different parameters; for example, I'll put my color wheels, effects palette or executable macros down there, because typically I don't need them to be as large. If I need a larger display, I just move them to one of the main windows. The advantages that the third screen possess and its future possibilities may put the Hog 4 in a class by itself. I really look forward to see what's next for that area of the console."

The Hog 4's User Kinds are another welcome addition to the programmers' bag of tricks. "We use a lot of custom fixtures in the motion picture industry," says Barnes, "and User Kinds have helped us to better implement the control of color temperature parameters and multi-intensity parameters. It's really nice to be able to lay that out exactly how you want and quickly manipulate parameters with the User Kinds. Media control is another area where User Kinds totally save the day."

The Hog family's networking capabilities are also vital to Barnes and Thatcher when working on multi-stage projects. Scott explains, "We network all the stages together - on Captain America 2 it was five stages - and the studio's IP department allocates a range of IP addresses specifically for HogNet. We dedicate a Hog PC system and a processor for each stage. The consoles act as clients or as separate servers; we can roll them into the stage, tap into the network, log in and we're ready to go. The Hog system allows us to access any stage and manipulate the lighting.

"The networking side of the Hog 4 is a huge deal in our industry. Josh and I started doing this first with the Hog 3, and it's been a great benefit to the console setup. Since that time, an overwhelming number of programmers have started employing the same setup for television and film features."

Thatcher adds, "Iron Man was the first movie where we started networking multiple consoles. Being able to move our consoles without shutting down the show is a huge advantage to us, and now that we are using the Hog PC system as our backbone we've gained even more flexibility. And as far as the Hog 4 line - I'm a full console or nothing! If you add that screen and that jog shuttle wheel, the additional encoder and your rate and intensity wheel - you can't take that away from me - we've always gone for the top of the product line."