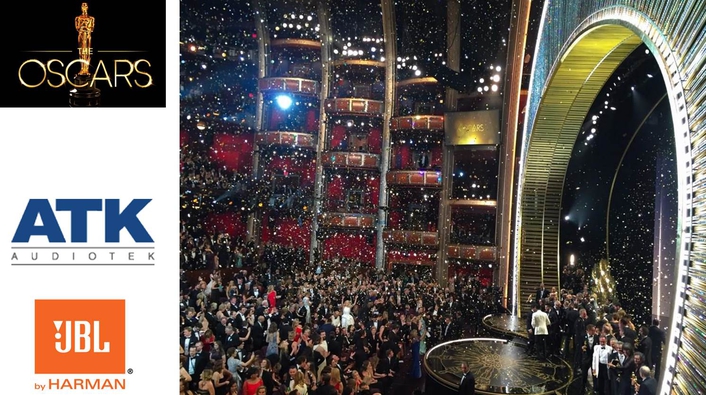 JBL by HARMAN VerTec® line arrays were once again selected to perform at the 88th Annual Academy Awards. The live ceremony was held in Hollywood to recognize the excellence in the motion picture arts and sciences in 2015. For the event, Valencia, California-based audio system provider ATK Audiotek deployed the sound reinforcement system, which was designed by Pat Baltzell of Baltzell Audio Design.

One of the biggest nights in entertainment, the 88th Annual Academy Awards was broadcast live on ABC and watched by more than 33 million viewers. Hosted by Chris Rock, the evening’s highlights included Spotlight winning Best Picture, Leonardo DiCaprio earning his first Oscar for Actor in a Leading Role for his performance in The Revenant and Brie Larson winning hers for Actress in a Leading Role for her outstanding work in Room.

“The VerTec series has provided reliable performance for the Academy Awards for several years now,” said Pat Baltzell, Baltzell Audio Design. “JBL’s technology delivers consistent, high-quality sound, time and time again. With a production of this magnitude, I know I can rely on the system to perform exactly as expected, so I can focus on other areas of the event with confidence.”

“We’re fortunate to work on several big-name events throughout the year, and for each of those events, we use our A-team and the best system,” said Mikael Stewart, VP of Special Events, ATK Audiotek. “A VerTec system allows for a fast, reliable install. It delivers highly advanced and consistent performance at show time. We know that when the design uses JBL VerTec, our clients are happy with the results.”

ABOUT HARMAN
HARMAN designs and engineers connected products and solutions for automakers, consumers and enterprises worldwide, including connected car systems, audio and visual products, enterprise automation solutions and connected services. With leading brands including AKG®, Harman Kardon®, Infinity®, JBL®, Lexicon®, Mark Levinson® and Revel®, HARMAN is admired by audiophiles, musicians and the entertainment venues where they perform around the world. More than 25 million automobiles on the road today are equipped with HARMAN audio and connected car systems. The Company's software services power billions of mobile devices and systems that are connected, integrated and secure across all platforms, from work and home to car and mobile. HARMAN has a workforce of approximately 28,000 people across the Americas, Europe, and Asia and reported sales of $6.5 billion during the 12 months ended December 31, 2015. The Company’s shares are traded on the New York Stock Exchange under the symbol NYSE:HAR.