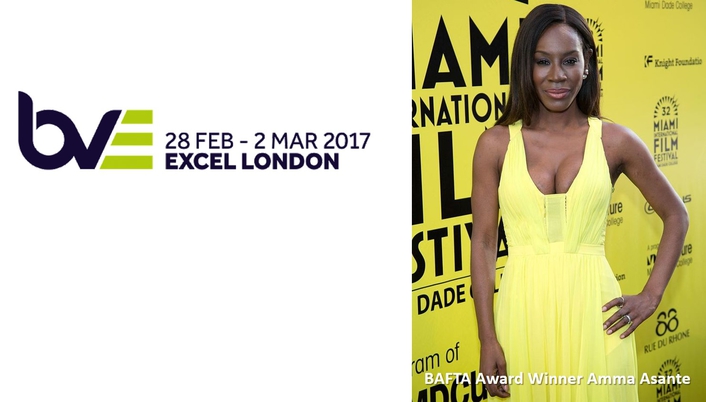 BVE2017 is pleased to confirm that Amma Asante, the award-winning writer and director, will take part in a keynote session titled ‘Power to the writer – Writing a winning screenplay’ on Tuesday 28th February 2017 at 13.15pm in The Screen @ BVE Theatre. The session will be chaired by respected film critic and presenter, Mark Kermode.

After leaving her acting career in her late teens, Asante went on to set up her own production company ‘Tantrum Films’ where she wrote and produced two series of the BBC Two drama, Brothers and Sisters. Asante’s next writing project saw her directorial debut, A Way of Life, winning Asante a host of awards, including the coveted BAFTA Carl Foreman Award for the ‘Most Promising Newcomer’. Her other credits include, Belle, the story of Dido Elizabeth Belle; and A United Kingdom, the biographical story of Sir Seretse Khama and his wife Ruth Williams Khama.

Kermode is chief film critic for The Observer and contributes to the BFI published magazine Sight & Sound. He also co-presents the BBC Radio 5 Live show Kermode and Mayo’s Film Review and the BBC Two arts programme, The Culture Show.

The BVE session will see Kermode and Asante explore her journey to becoming an award-winning writer, providing insight for budding screenwriters who aspire to follow in her footsteps.

Kermode will be staying with BVE for the duration of the day interviewing Adrian Wooton, Chief Executive, Film London and BFI, on ‘The Rise of UK-US co-productions: The benefits to UK producers and production services’, taking place in the Production Theatre at 14.30pm. In his final session of the day, Kermode is back in The Screen @ BVE Theatre chairing ‘An Audience with British Filmmaker – Dexter Fletcher’ at 15.50pm.

Daniel Sacchelli, Event Manager, BVE said, “BVE 2017’s seminar programme is crammed with a wealth of educational, inspiring, and fascinating content. Announcing such heavyweights in the film industry solidifies BVE’s standing in the film community and our mission to provide only the highest calibre speakers to our attendees. I am extremely proud of what our content team has achieved this year and look forward to the thoughtful debates that ensue from our sessions.”

BVE is the UK’s leading Entertainment and Media Tech event, with a 20-year history dedicated to the broadcast, production and post-production sectors. In recent years, the show has evolved into an all-encompassing live event that also covers the Connected Media, AV, Integration & Live sectors. It attracts more than 15,000 visitors who attend to discover and learn about the latest products, services and trends from more than 300 leading manufacturers and distributors. BVE is an Ascential event.