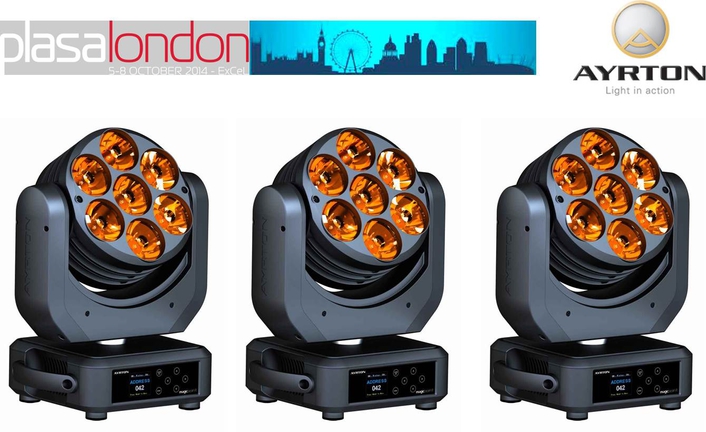 Ayrton’s MagicRing-R1™ is launched in a world premiere at PLASA London
French LED lighting innovator, Ayrton, loves to spring last minute surprises on its clients with the introduction of a stream of new products.

Having already released the Radical Series at Prolight+Sound earlier this year, and due to launch the new NandoBeam™ S9 at PLASA later this week, Ayrton has just announced a new addition to its Radical Series which will also receive its world premiere at PLASA London: MagicRing-R1™.

MagicRing-R1™ is the latest to receive the Radical treatment. Identical in size and form to WildBeam-R™, MagicRing-R1™ possesses all the features of the former but with the Magical speciality of Ayrton’s unique continuous pan and tilt features.

One of the smallest of the Radical range alongside its brother WildBeam-R™, MagicRing-R1™ offers seven 15W LED RGBW sources with 67mm optics to produce 3200 lumens with a centre beam intensity of 380,000 candela from a mere 130W of power.

Highly compact, lightweight, super-fast and powerful, MagicRing-R1™ benefits from improved thermal management and a fast 32-bit circuit board for rapid response to signals which can be delivered via DMX or RDM.

Its tight 4.5° beams present a reduced visual footprint and can be controlled individually or in groups to form fabulous visuals and effects.

To see these for yourself, visit the Ayrton Stand at PLASA London (R70) where the team will be happy to show you MagicRing-R1™ and the rest of the Radical range which appears for the first time in the UK.

AYRTON specialises in developing intelligent LED light products for entertainment and architectural applications.
Based south of Paris, France, the AYRTON Headquarters and Research & Development centre combine and organize the highest competence in engineering, software, electronics and optics, with the creation of highly innovative fixtures.
AYRTON fixtures are created to answer any demanding installation and criteria, and are distributed through devoted and exclusive worldwide teams. AYRTON uses reliable, flexible and avant-garde technologies linked to innovative design, to provide AYRTON customers with a wide range of pioneer lighting solutions for installation in Stages, TV Studios, Show-venues and Architectural schemes.