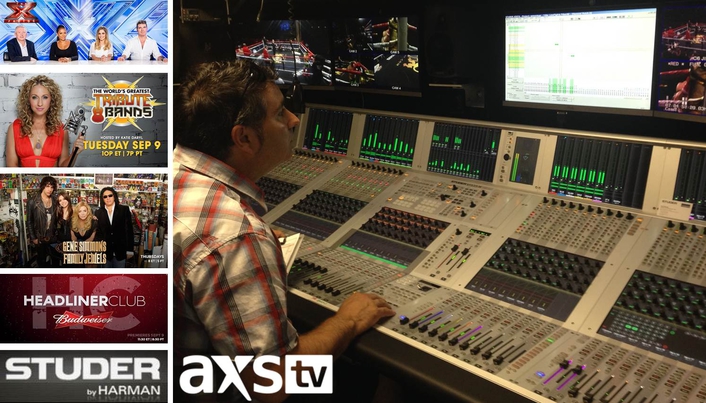 Technical Producer and Flyaway Engineer Jeff Carman wanted a digital console that could not only fit into the existing MADI infrastructure, but also provide the expandability of additional inputs and outputs. These options led to the purchase of the Studer Vista 9 M2 QS.

“I’m very happy with this console because it interconnects with all our other units via MADI, and works very well for multi-track recording and mix-downs,” said Carman. “What we got was impressive, and we found the fit and construction of the console to be incredible. After using a Studer Vista 5 console in our LA studio, I deeply respect Studer for doing things well, which was one of the main reasons for this purchase. More importantly, the support from Studer has been excellent.”

“I’m extremely happy with this great-sounding board,” said Dan Nabors, AXS TV Engineer in Charge (EIC). “We noticed that it configures easily when we tried to add new modules several hundred feet away. With this console, we are also able to only use fiber optics, eliminating copper altogether. After changing configuration to a different output card, the Studer Vista 9 looks great, sounds great and is quite user-friendly.”

ABOUT AXS TV
Launched in July 2012 by visionary entrepreneur Mark Cuban, AXS TV is dedicated to providing the best in music programming and festivals, comedy performances, current events and mixed martial arts promotions. AXS TV is a partnership between Mark Cuban, AEG, Ryan Seacrest Media, Creative Artists Agency (CAA) and CBS. The network is available in the United States via AT&T U-verse, Charter, Comcast/Xfinity, DIRECTV, DISH, Suddenlink, Verizon FiOS, and other cable, satellite and telco providers. The network is also distributed in Canada and the Caribbean.

AXS TV’s companion network, HDNET Movies, is a linear TV channel and VOD service that delivers the ultimate film watching experience -- uncut and uninterrupted -- in high definition. Launched in 2003, HDNET Movies programs a diverse slate of box-office hits spanning the 1950s to 2000s. The network is widely distributed by major cable, telco and satellite TV providers in the U.S.