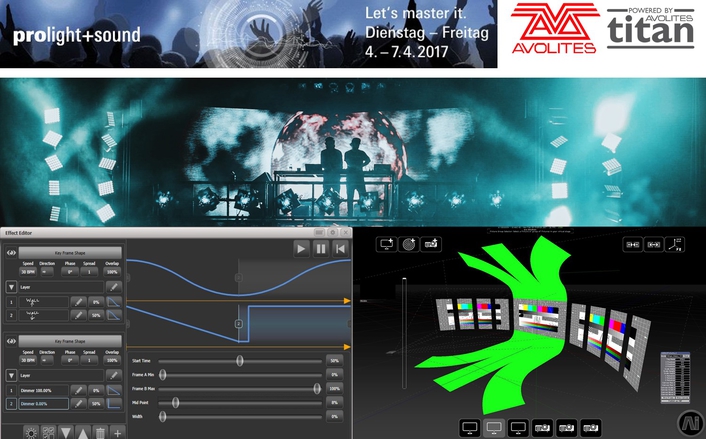 Avolites will launch two software updates and showcase its trailblazing new developments in lighting and video integration at this year's Prolight + Sound 2017 in Frankfurt. The British manufacturer will launch the full capabilities of its much anticipated Ai v10 media server software, developed through real-world testing, and the latest Titan update, v10.1, which boasts a plethora of end user-centric new features that will ensure Avolites stays resolutely ahead of the lighting control curve. Avolites will be in Hall 3 Level 0 Stand E80 throughout the four-day event.

Ai v10 - developed with creatives, for creatives
Ai v10 has been developed alongside some of the top names in the live event and installation sectors including the Director of Video Production at Hakkasan, Ed Shaw, Vice President of Entertainment at Hakkasan, James Algate, and Knight of Illumination award-winning video designer for Coldplay, Ben Miles.

The update includes the integration of real time effects generator Notch and video sharing feature Spout, both of which were developed alongside Miles and video programmer Leo Flint for Coldplay's 'Head Full of Dreams' tour.

'BPM Sync' is a new Ai v10 feature born from developing the custom integrated control system for the lighting and visuals at Hakkasan Group's JEWEL Nightclub in Las Vegas.

A new projection mapping tool, MeshWarp - features in the update. Born from the combination of Projective Keystone and Grid Warp - the feature enables users to quickly warp their content to match projection surfaces. This feature, in addition to auto map and auto blend, puts a powerful array of mapping tools in the hands of every user.

Head Ai Software Developer Ciaran Abrams commented: "Ai v10 represents a change in the media server in the way that our users will interact with the software. The extensive UI overhaul is just the start along with a list of easy, quick and intuitive controls, that make operating the software simple and fun."

Far more than 'just a point-release', Titan v10.1 offers significant new functionality as well as many fixes and improvements. Scene Master mode introduces a new and more refined way to use the console live.  Avolites' live palette time feature has been a favourite among users since the Pearl days, with Scene Master expanding its capability. The mode allows multiple palettes, playbacks and time information to be executed together, with either a fader or a chosen fade time.

Another key feature of the update is BPM Master, which now ensures all chases and effects attached to them remain not only at the same tempo, but also in synchronisation with the beat and each other.  Effects, including key frame shapes, can now be assigned a number of beats per cycle, allowing for more creative control when performing.

Not only that, effects can now also be linked to the group used to make them.  In this way, when the number of fixtures in a rig changes - as with festivals - the original group can be updated, and the effect will then run with all the fixtures in that group, greatly increasing flexibility and efficiency.

Avolites Sales Director Koy Neminathan comments: "Avolites has recently gone through some exciting changes which have allowed the company to adapt and change the way we create, produce and deliver world class products. The releases of Ai v10 and Titan v10.1 are just the beginning with more focus on reliability. Users and non-users have told us that they have seen and heard that Titan and Ai have taken huge strides forward in delivering what they require. So, it is clear that our training programme is working efficiently and deploying that through our vast distribution network is paying dividends. With a sustained increase in demand and currently having the largest order book in the company's history, it is clear to say that our new strategy is clearly going to create some positive shock waves. Prolight + Sound in Frankfurt is the best place to demonstrate this to everyone."