'Avolites' Sapphire Touch is easy to use and easy to look at! And the new Titan v7 software really pushes the console
Avolites Media's Ai Media Server is delivering fast moving evocative visuals on The Script's sell out arena world tour. Conceived by award winning lighting designer Jamie Thompson, in collaboration with members of the band and creative London based content producers Immersive, the show visuals are operated by US based Jeffrey Brown.

"The theme of '3' - reflecting the album and tour titles - was very important, and dictated much of the layout of LED fingers and stage graphics," says Thompson. "The Ai is being used to power a mixture of live camera feeds, video and visual content onto the main back video wall, and over the three, three-dimensional LED screens, which are embedded in the stage floor and run above the stage to reach into the audience like outstretched fingers. After witnessing the power of Ai at previous events, I knew we could create a stunning visual display for The Script, so I championed its use with the band and made it happen, and it was truly worthwhile - the results are fantastic."

Visuals operator Jeffrey Brown continues: "The biggest benefit of using the Ai Media Server is that the content is easily built to fit the 3-dimensional model of our LED layout on stage. This model was then imported into the server and used as part of the interface to map the content to the LED screens. Its ability to map the video to the server's physical outputs as it is required is also pretty exciting. For this production, we mapped the overhead and stage fingers to a Nocturne LED Processor, while the main upstage video wall is mapped to another separate LED Processor. As the production developed, we also added pre-show content, which is played direct from the Ai Media Server."

In fact, Brown says it was easy to add another surface in the Ai and then assign that to the free DVI output on the server. Content, a mixture of QuickTime clips and live camera inputs, is controlled via a combination of Time Code and manual triggering using an Avolites MSC-1.

Mark Calvert, managing director for Immersive - the London based design company that produced and directed all of The Scripts digital content and who worked alongside Jeff Brown to setup the Ai elements for the show comments: "The band directly approached Immersive with only six week until the tour kicked off in Ireland. We were commissioned to make seven bespoke template specific videos, which were to be a defined and obvious mix between film, 3D and 2D disciplines." 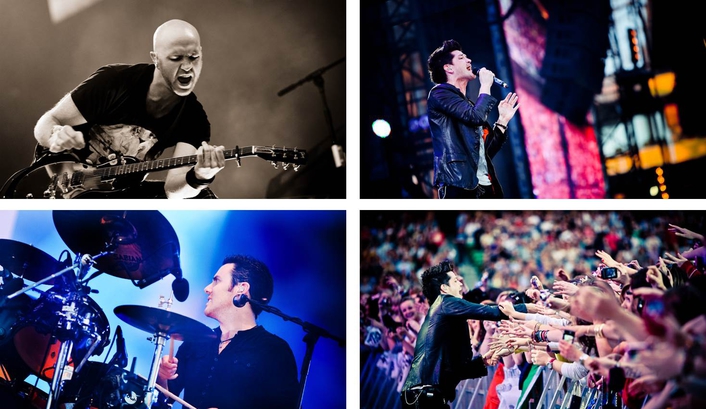 According to Calvert: "The Ai makes dealing with the 3D layout of the LED screen design a total breeze. It also means that significantly less time is spent mapping outputs on the road. This is vastly important (when on a pressured deadline) because Ai enables both our creative team and the guys in the band - to 3D visualize show content before rehearsals."

One of the significant reasons Immersive insists on using Ai throughout the design and show process is it's proven ability to adapt to ever changing Live Music environments as Calvert explains: "This was proven again on The Script, when the band (during the tour) wanted to add clip preferences, new media, and additional outputs on the fly. Working with Jeff was fantastic and he is now a key player in our US operations."

Brown continues, commenting that the Ai is a "unique take on a media server", adding: "I discovered that I could manipulate the content on the model without worrying about how to map the individual clips. I believe the Ai Media Server has an excellent future ahead of it. Avolites Media is a responsive company and they listen to their customers. The Ai product is unique in the market. With the initial idea combined with positive industry feedback it has the potential to become the game changing piece of kit."

Steve Warren, MD of Avolites Media enthuses: "Ai Media Servers were launched 18 months ago and already have been used to deliver some of the world's most impressive visual spectaculars. Ai Media Servers amazed the world with history's biggest ever video screen during the London Olympic Games Opening and Closing Ceremonies, we controlled the huge screens and projections for the Miss World finals as well as the stunning set on Sky 1's Got to Dance show. And we are incredibly proud to be working with Tait Technologies again for what we believe is the world's most complex moving mapping production: 52 moving set pieces on Bon Jovi's - 'Because We Can' Tour.

"Jamie Thompson's innovative use of the screens on The Script's tour to again emphasise the strong 3 theme is ideally suited to Ai and it was a joy to experience the power of the visual effect. Everyone at Avolites Media is proud to be working with Jamie and with such a great talent and attitude - the only way is up!"

Thompson - who in 2011 was presented with a Knight of Illumination Award for his lighting design for The Script's Arena tour - says the Sapphire Touch is not only enabling him to enhance his creative lighting design, but also ensuring that he can programme quickly within the time constraints of the tour schedule.

"I've always been a big user of Avolites, not just for their products, which I love, but also because of the company itself and the support and friendly advice that is on hand, all around the world 24/7," comments Thompson. "I actually own the first ever manufactured Sapphire Touch - 001 - and since I bought it have used it on every show I do. Once it's set up and configured it's a very easy and creative tool to use. It provides a smooth interface between the stage and me and I can find what I need in the rig and programme it very quickly. I can also load fixtures and effects very fast, which is a big thing for me with the obvious time constraints. The effects I can get out of the console are massive. It's a clear choice for me." 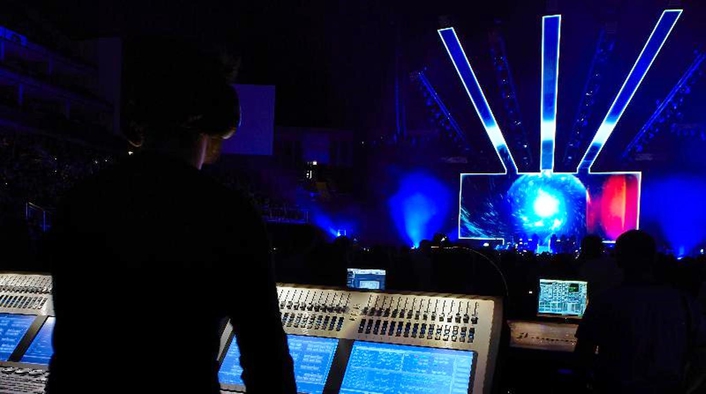 The Ai is powering a mixture of live camera feeds, video and visual content onto the main back video wall, and over 3D LED scree

Thompson has been working with The Script now for five years, creating spectacular lighting designs that mirror the energy, passion and dynamism of the band's sound.

"The inclusion of the pixel mapper on the Sapphire Touch is really amazing- it's like a mini video server, allowing me to draw pictures with lighting and quickly animate them in my show," continues Thompson. "The layout of the palette, the touch screens, and the Titan v7 software has come on leaps and bounds - the colours being visual, and the fact that you can make your own labels are great additions. In a way, the Sapphire Touch is a bit like an Apple product - easy to use and easy to look at! And the new Titan software really pushes the console to new places."

The Script's current tour, entitled # 3, played at some of the UK's biggest venues, including Liverpool's Echo Arena, and London's O2 Arena and Wembley Stadium and has now headed off to South East Asia, Australia, New Zealand and then on to the US before returning to the UK to follow the festival circuit.

"We are proud that Jamie Thompson bought the first ever Avolites Sapphire Touch off the production line. The expansive workspace area the console offers can be crucial on tours like The Script, which feature complex lighting design concepts and which require fast set up," explains Koy Neminathan, sales director for Avolites Ltd. "The Sapphire Touch integrates Avolites comprehensive Titan V6 operating system and offers dual touch screen monitors for an enhanced and faster workflow. This console is designed for large-scale arena tours and thus offers designers fast programming and efficient and smooth automated playback. We are delighted that Jamie is such a big fan of the console and wish him all the very best on the rest of the tour."