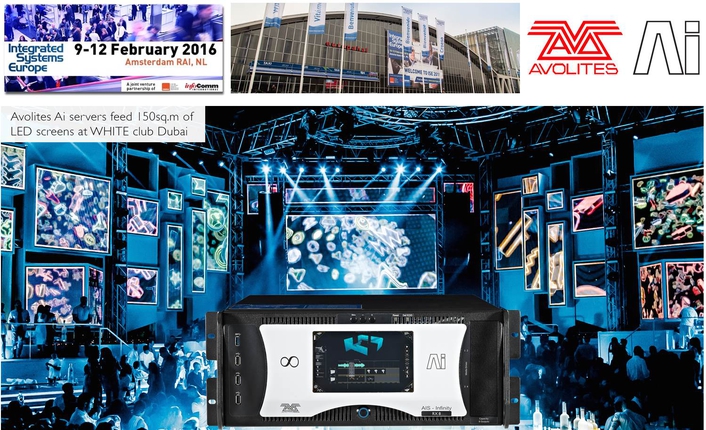 Avolites is on stand 8-K330 at ISE Amsterdam, which opens today at the RAI Exhibition and Conference Centre, to launch its powered up new range of Ai R Series media servers.

The Ai R Series is Avolites' most powerful range of media servers to date, and comprises the Ai Infinity R4, Ai Infinity R8, Ai Infinity Rx4 and Ai Infinity Rx8. All servers in the range take advantage of the increased speed and power of the latest processors, solid-state drives and AMD graphics cards.

"We've packed the very best technology into the Ai R Series so we can be sure it satisfies even the most demanding of applications," says Avolites' MD, Steve Warren. "The servers offer smooth playback of up to 8K media using the leading AiM Codec plus 4 or 8 full 1080p HD outputs. The Ai R Series is the future of media technology now, direct from Avolites. We can't wait to showcase what they can do for your project."

Avolites' redesigned, bespoke ISE booth features a 'Media Integration Focus' area where visitors can get hands on with the latest in integrated lighting and video.

Visitors will also be among the first worldwide to get a sneak preview of the much-anticipated Titan V10 software, which enhances the best-loved features of V9. The most striking addition is the full 3D visualiser from Capture, which is now fully integrated into the software. The Avolites team will also be demonstrating the much loved V9 features including pixel mapping, Key Frame Shape engine and fully featured theatre functionality.

Avolites is also launching its new user designable control surfaces for Titan software. Especially designed for installers, this new API allows you to create your own touch control surfaces using basic HTML skills - a bespoke user interface tailored for your specific use, which then harnesses the power of the Titan software. It is compatible with popular control systems such as Q-Sys and Crestron. With this new ability to 'tune' Titan to your specific requirements you can start using Avolites' leading lighting software in a array of new situations and environments.

Also on show will be the Arena console with Optical Titan Net Switch and Avolites' complete Titan Net solution.

"The Arena console has attracted a huge amount of attention since launch - we've been inundated with lighting designers, rental companies and specifiers," says Avolites' Sales Director, Koy Neminathan. "Feedback has been fantastic on the vast array of faders and buttons alongside an integrated touch screen, and second, smaller touch screen and the rotary encoders. The unique Optical Switch built in to the console was hailed as an incredibly useful tool."

Arena is the ideal console for festivals, theatres and anywhere that a larger control surface is required. It combines the popular interface of the Tiger Touch II with 30 additional Playback faders and expanded live control options and features.

The Optical TNS is perfect for connecting FOH to stage using Cat5E Ethernet cables for distances under 100m, and an Optical input for fibre connections over distances exceeding 100m. The 1Gb network switch also features a built in UPS to ensure the stability and resilience of your show setup.