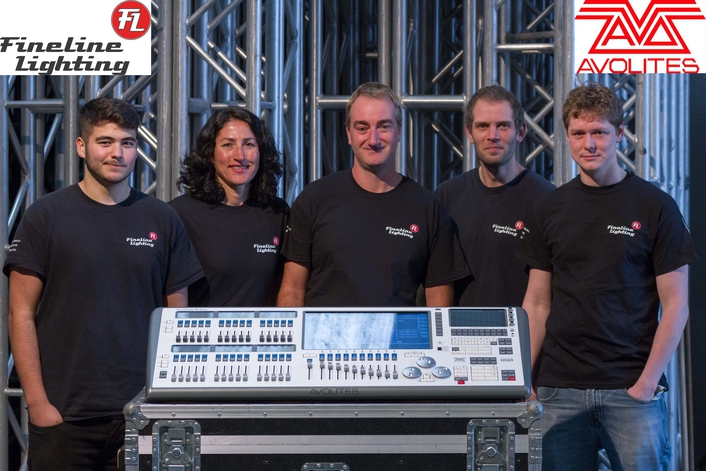 Avolites has been offering end users and partners sneak previews of its live control focused Arena console since April, when it launched the desk at Prolight + Sound in Frankfurt. Arena is designed for festivals, theatres and anywhere that a larger control surface is required. It combines the popular interface of the Tiger Touch II with 30 additional Playback faders and expanded live control options and features.

"I was immediately impressed with Arena's inbuilt network switch, built in optical output for long runs, the fact that it's future proof due to optical out, loads of faders, additional screen for Titan V9's amazing Key Frame Shapes and fixture attribute editor, eight standard DMX universes straight out the back and built in UPS," says Sangwell. "This console fits our range of control kit, filling the gap between the Tiger Touch, the Pearl Expert and the Sapphire Touch.

"Arena is a good mid-size console with a good feature set for our type of work. This, coupled with the excellent after sales backup we get from Avolites made it an obvious choice. A good proportion of our customers and crew prefer Avolites and I think they are going to love this console. We're thrilled that we have model #001 on offer - the very first commercially-ready Arena in existence!"

A new optical output means the Arena is equipped for fibre connections, with no signal loss over long distances, from front of house to the stage - essential in large and outdoor venues. Offering seamless multi user compatibility, the Arena can be used as master, back-up or extra programming surface, considerably cutting programming time by allowing multiple Titan programmers to work simultaneously, before the main console takes charge.

Arena is capable of processing 16 DMX universes, with eight physical DMX outputs, and this can be further expanded with Titan Net Processors for up to 64 universes. It also offers MIDI in and headphone out on the console as well as a 7-band Audio Trigger functionality.

"We intend to use this on our festival shows, such as Glastonbury, the Eden sessions, Outlook Festival and many more," Sangwell continues. "The large control surface is great for programming especially if you're using some of the more advanced features, plus it's really good for busking too. The optical out is also a good feature for this market due to the sometime long runs to FOH.

"Additionally, the console will work well as the house desk when visiting acts are bringing their own control as the built in networking facilities will make the network plug up easier with less kit needed out front. Also, as a bonus, the larger control surface will also allow for easier manipulation of the multiple layers of our Ai media servers."

Steve Warren comments: "We couldn't be happier that the Arena has created so much excitement and received such positive reviews from our targeted lighting designer focus group. Arena takes Avolites' live control to even higher levels, following on from industry successes and milestones like the Pearl and Expert consoles. Arena guarantees that Lighting Designers are given all the live control that they need and deserve. And we're delighted that long-time Avolites partner Fineline Lighting has Arena model #001 in its stock, ready for use by its loyal clients on some of the biggest festivals in the UK."