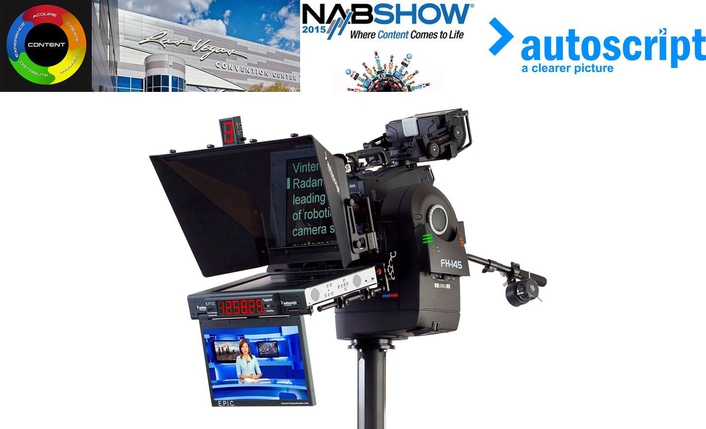 E.P.I.C. 19 with new remote control solution
Autoscript, a Vitec Group brand, will showcase its recently launched E.P.I.C. 19 to NAB visitors for the first time, including a new feature, display remote control. The new 19 inch Enhanced Prompting Information Centre (E.P.I.C.) offers large studios one of the lightest and most power-efficient teleprompter systems for its size.

Based on the renowned E.P.I.C. 17, the new E.P.I.C. 19 has been developed for use in large studios that have requirement for a smart system to display prompter text and transmit images to talent. It features dual SDI inputs as standard, one for the prompter monitor and the other for the talent monitor, and an integrated tally light. The 19 inch LED prompter monitor is backlit, while the super thin on-air monitor delivers crisp and clear images to talent.

By combining both monitors in the same system, the E.P.I.C. 19 eliminates the need for additional components and a mounting assembly, thereby making it more power efficient and lightweight. In addition, due to the absence of a mounting bracket the full tilt range of the camera can be used.

Autoscript will showcase added functionality to its entire range of E.P.I.C. units with the launch of its brand new E.P.I.C. display remote control. The display remote control will become a standard element of all of the company’s E.P.I.C. systems, and can control both the talent and prompting monitors. The infrared control allows the talent to select the video feed on both monitors, and because each remote is unique to the specific E.P.I.C. system it is operating, multiple talent can select their own video feeds in multi-camera studios.

“The E.P.I.C. 19 system has already been well-received because it meets all of the requirements of those large studios looking for the most space, cost and energy efficient solution to display larger images and text to talent. NAB 2015 offers the perfect platform to showcase this solution, alongside the brand new display remote control which will be incorporated into all of our E.P.I.C packages,” says Robin Brown, product manager, Autoscript.

About Autoscript
Autoscript is the world leader in the prompting industry, providing professional teleprompting equipment to broadcasters across the globe. Celebrating its 30th year in 2014 and with headquarters in the UK and the US, Autoscript designs and builds innovative hardware and software to meet real world needs and continually enhance the production process. A prime example of this Autoscript’s globally renowned E.P.I.C. (Enhanced Prompting Information Centre), an all-in-one prompter display and on-air talent monitor that vastly simplifies studio equipment, reduces power consumption and enables easier location prompting. Autoscript is a member of the Vitec Group.