Mark Shoesmith, Autocue’s Hardware Director, explains the current issues with prompting in the field, “A teleprompter is often ruled out for outside broadcast shoots because the kit is too big and bulky to carry, and the cabling and power requirements are too complicated. iPad prompters offer much better portability but often don’t meet professional broadcasters’ requirements.” 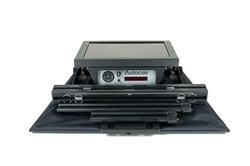 The key to Autocue’s new ultra-portable kit is a new folding hood and a brand new Autocue app. Thanks to these new developments, Autocue is able to fit an entire teleprompting kit in a 1600 Peli Case. There’s a battery powered Master Series 12” prompter, a camera mount and bracket set and the new folding hood – all secured in a custom foam insert.

The script is fed to the prompter using the new iAutocue app on an iPad. The app enables the user to take a video output from the iPad and feed it directly to teleprompter monitor. The speed of the script is controlled from the iPad – from where the script can also be edited. There’s no need for a dedicated laptop and controller.

Shoesmith explains, “iAutocue is a real game changer for prompting short pieces to camera in the field.” iAutocue allows you to send wireless video from an iPad to an external teleprompter monitor. You can then use your iPad as an edit workstation, a prompt preview and a scroll control for that teleprompter. 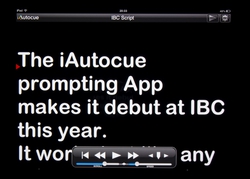 The app also contains a new feature called “rehearsal mode”. This allows the presenter to video himself/herself from the iPad camera whilst reading the script from the app, and then immediately watch the recording back on the iPad.

Shoesmith continues, “Normally you need a swathe of kit and power sources to use a professional teleprompter in the field, even for short pieces to camera. The iAutocue app reduces this right down to a prompter and an iPad, all of which can fit in a single 1600 Peli case and be battery powered.”

The alternative configuration is to mount the iPad itself as the teleprompter monitor. In this scenario the speed of the text on the iPad can be controlled from an iPhone (via a separate iAutoscroll app), a rechargeable Bluetooth keyboard which can also be used to make script edits on the iPad, or a wired hand or foot control.

Shoesmith concludes, “The rig and de-rig of the teleprompter is extremely easy, each taking less than five minutes. The new kit is so simple and effective that it can be used on any outside shoot.”

Finally Shoesmith explains the driver for the new DSLR prompter, “The use of DSLRs in video shoots has increased significantly, resulting in increasing demand for a compatible prompter. Whilst various teleprompters (including our own) can accommodate DSLRs, they are far from a perfect fit. The Autocue DSLR prompter changes that.”

The prompter mounts to a standard set of 15mm rails in front of the DSLR, making it extremely lightweight and enabling the user to mount a range of accessories onto the rails. There is also an optional bar at the top of the hood with a number of ¼ BSW threads to accommodate further accessories like on-camera lights, microphones and magic arms. 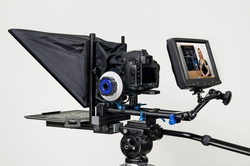 Autocue sells its own 15mm rail camera mounting kit if you don’t have one of your own. This kit ensures easy access to the lens and the ability to rapidly raise or lower the camera mount to accommodate all DSLR models.

Autocue will range two variants of the DSLR prompter – a universal tablet mount (iPad, iPad Mini and other tablets) and an 8” monitor. In addition to the traditional on-camera set-up, the package includes a detachable straight-read mount for simple applications (magic arm required).

The iPad version can be teamed with Autocue’s brand new prompting app, iAutocue ($5) or any other prompting app. Autocue’s QStart software is included free of charge with the 8” package.

Autocue’s DSLR prompter will start shipping in October 2013 with prices starting from £499/ $799.

Autocue (The home of QTV teleprompters) has been the leading provider of teleprompters to the broadcast industry since their introduction in the 1950s. Today, Autocue has the broadest teleprompter range, with the leading hardware and software product at every price-point. Tens of thousands of users worldwide, ranging from schools and videographers to high-end broadcasters such as the BBC, NBC, MBC, Doordarshan, TF1 and CNN, rely on Autocue for their teleprompting needs.