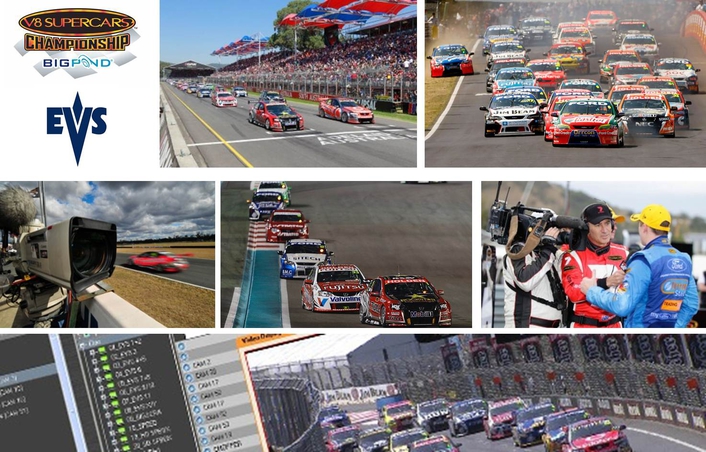 The Bathurst 1000 50th Anniversary Race
EVS, a leading provider of broadcast and media production systems for sports, news and TV entertainment, has announced that V8 Supercar Television relied on EVS systems for the Bathurst 1000 50th anniversary race which took place on Sunday 7 October. Known as ‘The Great Race’, the annual 1000km endurance race at Mount Panorama Circuit in Bathurst, New South Wales, is widely regarded as the pinnacle of Australian motorsport.

As part of the International V8 Supercars Championship, production company V8 Supercar Television produced live coverage and highlights of the race with help from Global Television, a leading provider of outsourced television production services. The race was broadcast in 117 countries, with Seven Network holding the rights for live TV coverage in Australia.

V8 Supercar Television deployed 16 EVS XT series HD servers in three OB vans for multi-cam recording, live and slow-motion replays, and highlights. According to Dan Flett, broadcast engineer, Global Television: “Large-scale productions such as the Bathurst 1000 are simply a large version of our smaller events. EVS systems scale very well with our production requirements so we don't have to learn new software or workflows when we ‘go large’. We add more devices and it just works. In the live production realm there’s an expectation these days that any signal or recording can be transferred to anywhere in the facility, almost instantly. EVS makes this a reality.”

The video replay operators used EVS Multicam LSM controllers to control the XT series servers. “The latest version of Multicam LSM is a godsend, enabling us to adjust a lot more parameters live so the server doesn’t need to be rebooted as often,” said Flett. “All job-related settings are saved in separate files, so there's a lot less reconfiguring of servers between jobs - you just pull up the file for the job and load it. The ability to transfer configuration files between servers and choose which parts of those files you want to transfer saves a lot of time. And with more central management of EVS servers, a lot of the setup can be done without even having to leave your chair.”

The editors received footage from events as they happened, enabling them to quickly produce polished highlights packages and show closers with up-to-the-second footage. To speed up the time to air, the editors simply pushed their highlights packages back to the on-air replay operators to be played to air via EVS servers.

V8 Supercars also used three EVS IPDirector suites of video production management applications to manage and exchange media with Avid Media Composer editing workstations, and for backing up content to EVS XF2 removable archives. At a large racetrack like Bathurst, IPDirector also played an important role in giving operators an overview of all the footage on a single console, helping them make sense of the incoming material.

With EVS’ new XFly portable SATA-based storage case, the production team was able to immediately stream live feeds to the portable storage platform. The footage was then edited offline overnight using Avid Media Composer on a laptop plugged into the XFly case. The EVS live production servers and workflow were configured in Avid DNxHD codec at 100Mbps for a fast, seamless workflow between production and post without the need for transcoding.

“The level of support we received from EVS was outstanding,” added Flett. “Even with more intricate setups and integrations the EVS guys stayed with us until we were satisfied, no matter how long it took. They also visited us at the OB to see how we're using the system and gave us helpful ideas on new ways of doing things and how to get the most out of new features. At one point they even stepped in and replaced an operator when we were short of replay crew!”