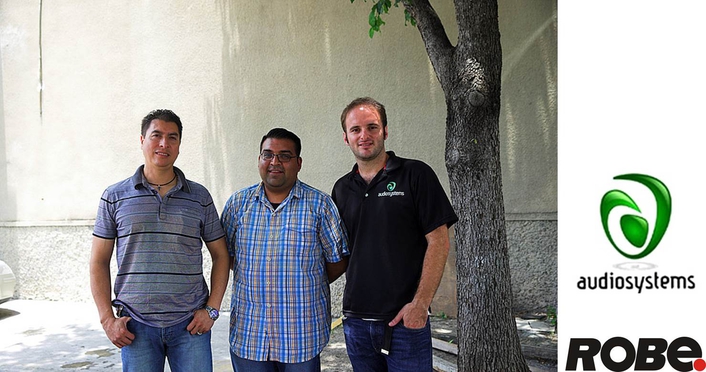 One of Mexico’s major full technical production and rental companies, Audio Systems del Norte based in Monterrey, capital and largest city of the north eastern state of Nuevo León, has invested in its first Robe moving lights – 24 x Pointes.

Mexico is a rapidly expanding market for Robe, largely due to the efforts of distributor Vari Internacional, and the Pointe with its true multi-functionality is one of the most popular products right now.

Robe’s reporting team rocked-up in Monterrey and interviewed Audio Systems’ sales manager Franco Cinquini, who has been with the company since it was started in 1993 by Carlos Escoto.

Audio Systems provides lighting, sound, video, rigging, staging and power to a wide selection of concert tours – including international artists – cultural performances, music shows and parties / social events. They are particularly strong in the concert market and recent tours and shows have included working with Ricky Martin, David Guetta, Camila, Skrillex, The Scorpions, Miguel Bose, Juanes and many more! That’s the calibre of their client list!

The 24 x Robe Pointes are a recent addition to their extensive stock of moving lights. They were the first rental company in Monterrey to have Pointes and the first of the biggest 5 production facilities in Mexico to purchase them.

“All the artists want to work with Pointes,” explains Franco, “they are appearing on riders constantly now, and for many LDs it’s their moving light of choice so we need to have them in stock”.

He also thinks Pointes are well priced and great value as they can be used for so many different purposes and applications.

Using 24 x Pointes – because they can be a beam, spot and wash fixture and provide a selection of amazing effects – are all the moving lights needed to nicely light a small to medium concert, he elucidates, “They can do everything needed!”

Commenting on Robe generally, he thinks the brand is “the new star of the moving light industry”.

He adds that the service and support from Vari is excellent, an all important factor when considering which new technology to purchase.

Sixty four full time staff are based at the large warehouse in one of Monterrey’s many industrial parks, around 14 taking care of administration and 50 technicians, engineers and drivers.

They have a fleet of 7 trucks in Monterrey and a pool of about 150 regular freelancers who  will be servicing around 20 – 30 tours, concerts and shows a month, rising to over 50 in peak times.

In 2014, a branch office was opened in Cancun to service their work in the south of the country, complete with another 10 staff. Audio Systems also frequently works in the US and other Latam countries like neighbouring Guatemala.

In keeping with the premium brand investments, they have Meyer and Adamson sound systems on-board and are a previous customer of Vari with Avid sound consoles.