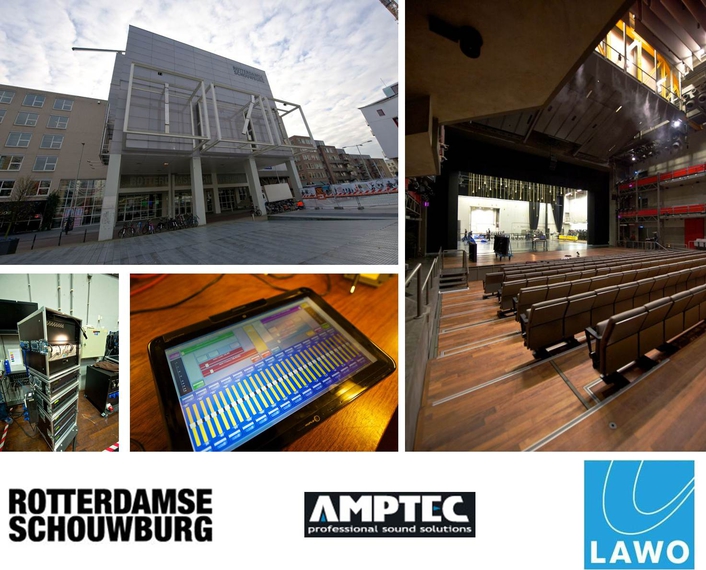 Rotterdamse Schouwburg installs Lawo-based digital infrastructure
In the Dutch city of Rotterdam, the Schouwburg theatre has gone live with a comprehensive infrastructural upgrade of its audio facilities. The first theatre in the Netherlands to take such a bold step, the Schouwburg has commissioned Amptec BVBA to realise fully centralised digital control of the audio facilities for its multiple performance spaces, selecting Lawo’s Nova73 HD router for its superior integration and flexibility.

The Rotterdamse Schouwburg is the city theatre of Rotterdam, a modern facility built in 1988 to showcase a fine selection of theatre, dance, opera and youth theatre from the Netherlands and Belgium. The theatre is known for its international programme, especially its festival the Internationale Keuze, and it also houses the Productiehuis Rotterdam, a producing arm which invests in emerging artistic talent.

Working to a concept brief from the theatre’s technical team, Amptec has supplied the Schouwburg with an advanced digital audio infrastructure which can gather and distribute signal around all areas of the building. To achieve this full connectivity, a Nova73 HD core from Lawo has been installed in a central machine room, and linked to all areas of the building over a fibre optic network.

The Nova73 HD is fitted with 16x MADI I/O and two DSP cards, and linked with a VSM server, which controls the Lawo matrix. Seven Dallis frame stageboxes are used, three of them installed in the two auditoria and the central hall, supplemented by floating racks, giving the technicians complete freedom to connect every source to every location.

“They don’t need to patch that much now, as it can be done through the computer,” explains Amptec’s Bart Hilberink, adding that there is local control of settings in each venue via VSM panels. “With a DSP card for mixing 48 channels of audio included in the Nova core, the sound operator only needs to find the means to control the faders – I’ve seen a small ensemble piece being mixed on an Apple iPhone.”

With routing capacity of 1024x1024, the Nova73 HD handles all the processing, EQ and delays for the theatre venues’ different audio systems. It operates under the overall control of Virtual Studio Manager (VSM) software, which supports integration at the highest level with the Lawo router, one of the main reasons for choosing these technologies. “This digital system offers far more flexible possibilities to the theatre,” says Hilberink, “and the Schouwburg has benefitted from the technical team’s input to design an interface that is ergonomically familiar for theatre professionals.”

With the theatre’s old analogue cabling still in place, the Schouwburg team can count on it for back-up, thus saving an element of budget. However, with the Nova73 HD’s acclaimed STAR² technology easily retrofittable, the system could take on board maximum redundancy and fail-safe operation at a future date.

One of the Schouwburg’s first opportunities to flex the muscles of its new system has been the Rotterdam Film Festival, where the same film can be shown in three different venues but with the soundtrack distributed over the network from the central source.