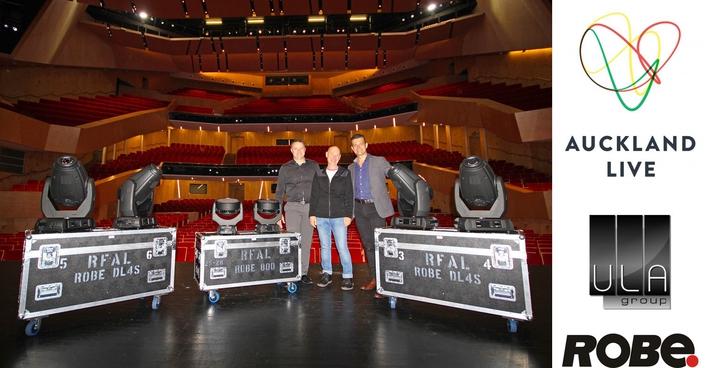 Left is ULA’s Blair Terrace, with Auckland Live’s Malcolm Ibel in the centre, and ULA’s Cuono Biviano on the right

Auckland Live is a busy umbrella organisation running all the live performance venues in New Zealand’s largest performing arts and convention centre complex … right in the heart of the city. Their existing stock of Robe moving lights is now boosted with the addition of 44 new LED moving lights -  12 x DL4S Profiles and 32 x LEDWash 800s.

Head of lighting Malcolm Ibel has been using Robe moving lights increasingly in his work in recent years, and Auckland Live initially invested in the MMX Series with the purchase of 12 x MMX Spots and 12 x MMX WashBeams.

Having been extremely happy with the performance of these and what they brought to lighting the various venues and shows, they had a solid basis for the decision to go with the latest purchase.

The DL4S Profile was selected for its finesse and elegance as a theatrical luminaire – compact size, light weight, good zoom, superior colour mixing including great whites and high CRI for good flesh tones, plus super-smooth dimming and shutter blades.

The LEDWash 800s were also chosen for their excellent colours and ability to reproduce the intricate pastel ranges as well as all the bold primaries and secondaries, and as a general solid and dependable all-purpose fixture.

Like the MMXs, the new fixtures will be deployed across the various Auckland Live venues, and were also delivered by Robe’s Australian and New Zealand distributor the ULA Group and their local representative, Lighting Supply Company, with whom Malcolm enjoys an excellent relationship.

The Auckland Live venues includes the historic Auckland Town Hall, a well-known 1600 capacity concert hall; the Aotea Centre with 12 different spaces and home to the Auckland Philharmonic Orchestra; The Civic Theatre, a highly atmospheric 3000 seater Art Deco architectural masterpiece; and Aotea Square, a public space nestling between all these venues … as well as the Viaduct Event Centre and the Bruce Mason Centre on Auckland’s north shore.

Malcolm’s association with Auckland Live (previously known as The Edge) actually goes back to 1991 when the Aotea Centre opened in the city centre. He returned full time 11 years ago after freelancing and working internationally lighting many different shows and tours. 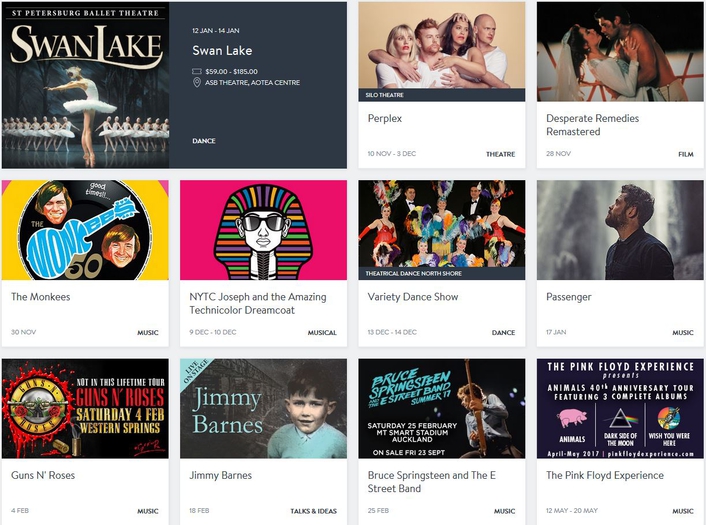 He started specifying Robe products a few years back for certain special events, for which they were hired in, which led to him recommending that Auckland Live start investing in their own set of moving lights. The move was approached with trepidation, as up until that point they had traditionally lit most of their own productions with conventionals.

“I started asking people - incoming LDs and programmers together with the regular freelancers working here - what they would ideally like in a moving light and compiled a wish-list” explained Malcolm, “and we also needed something affordable”.

Robe was mentioned frequently, and he also had the chance to meet Robe’s CEO Josef Valchar on a visit and discuss the organisation’s moving light requirements first hand in the context of Robe’s current ranges.

“The Robe kit is properly innovative – it’s not just a reinvention of something that has gone before … with every generation of product development new technology is used and optimised,” says Malcolm.

Being run by Auckland City Council, a commitment to having the right ‘green’ credentials is also important, and “Robe are bang-on” in this context he says.

Getting units that were properly ‘multi-functional’ was another consideration. He needed fixtures that could be used to light a drama or a dance performance and also do some raucous rock ‘n’ roll shows!

He specified the MMX Spots first, closely followed by the MMX WashBeams … and is now delighted to be able to expand the Robe count with the DL4S Profiles and LEDWash 800s, which will be used daily somewhere across the Auckland Live complex.

The brightness, light weight – a convenient one-person lift – and the power efficiency of all these products are welcomed at Auckland Live.

Malcolm manages a Lighting department of five full time staff who work with around 20 regular freelancers across all the venues. They both produce and receive a huge diversity of shows all year round, and the place is a constant hive of activity and creativity, also staging their own community events.

Corporate and commercial meetings and conferences are co-ordinated by another division of the organisation, Viaduct Events, and for many of these, Auckland Live will be the technical co-ordinators, proposing and delivering a complete design and all the requisite technical elements.

While they don’t need a lot of ‘support’ as such, as the Robe products are extremely reliable, ULA Group has arranged product training sessions to assist Auckland Live staff to get the most out of their kit, and Robe’s international training and product support manager Steve Eastham has also engaged in a roadshow and on-site training to ensure everyone is fully aware of the power and potential of their moving lights.