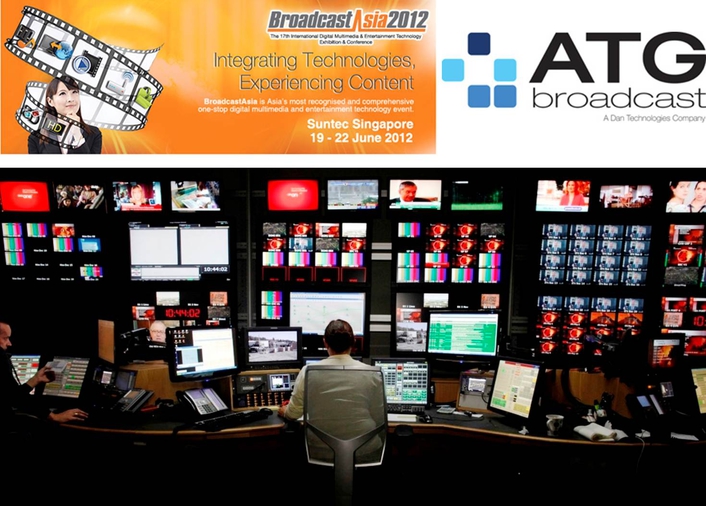 "Broadcast Asia provides an ideal venue at which to follow up on discussions initiated at the NAB Spring Convention and to meet with people who did not have time to attend the American show," Graham Day comments. "There was a lot of talk at NAB about the possibilities of cloud-based computing which essentially involves adding a layer of virtual storage to a main archive so that post-production staff can work away from base. This is a natural extension of the file-based architecture ATG Broadcast has advocated for many years and is one we can implement either on cloud-based servers or as part of a mainstream broadcaster's on-sight archive. A key advantage of off-site content storage is the security it offers when paralleled with local storage. Beyond that, the key issues are content searchability, speed of access and relative cost."

Projects currently in progress or recently completed include:

* A five-camera production studio and file-based ingest system for Arab Radio & Television. The order was won against stiff competition from other system integration companies. This facility will form the technical heart of an entirely new site in Jeddah.

* A networked ENPS newsroom for South African Broadcasting Corporation (SABC). With 1,100 user licences, the new system will be the world's fifth largest of its kind. Its primary role will be to prepare content for all SABC television and radio news operations, including regional stations and international bureaux. The core installation is located in SABC’s headquarters at Auckland Park, Johannesburg.

* A large-scale project for Associated Press as a key element in the organisation’s global transition to high-definition operation. The contract centred on a new HD master control room (MCR). Located in Camden, London, the MCR is AP's global video operations hub. It is fully equipped for 1.5 gigabit/s operation but with a core that can easily be upgraded to 3 gigabit/s as or when required.

* A 3D studio and editing facility for Al Jazeera Children’s Channel (JCC). The project forms part of a new extension to Al Jazeera’s headquarters at Education City on the outskirts of the Qatari capital, Doha. The new system, currently being installed, will consist of the studio itself plus a guest area and an Apple Final Cut Pro edit suite.

* In Kuala Lumpur, Malaysia, ATG Broadcast completed a comprehensive rebuild of Astro's All Asia Broadcast Centre (AABC), including HD infrastructure. A new suite of operational areas was constructed and the station architecture re-engineered to provide resilience plus easy future expansion capabilities. The entire project took place while the station was on-air, transmitting 100 direct-to-home channels to subscribers in Malaysia and Indonesia.