From June 20th to June 28th, more than 17,000 people enjoyed the Open-Air-Cinema at Munich’s Königsplatz (King’s Square), with ARRI contributing to the ambiance by lighting the Glyptothek and Propylaea buildings, as well as the State Museum of Classical Art, using SkyPanel fixtures. Available in two sizes – the SkyPanel S60 and S30 – these compact, ultra-bright and high-quality LED soft lights are the result of years of research and development at ARRI in the field of LED technology. 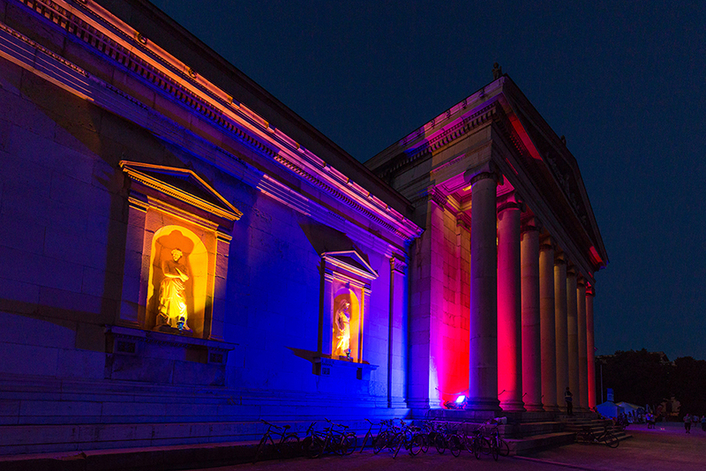 Incorporating features of ARRI’s successful L-Series LED Fresnels, SkyPanel is one of the most versatile soft lights on the market, and one of the brightest. Like the L-Series, SkyPanel ‘C’ (Color) versions are fully tuneable; correlated color temperature is adjustable between 2,800 K and 10,000 K, with excellent color rendition over the entire range. Full plus and minus green correction can be achieved with the simple turn of a knob, and in addition to CCT control, vivid color selection and saturation adjustment is also possible. Applications for this controllability range from quickly tweaking the CCT in order to set the mood of a scene, to selecting the perfect green color to wash a greenscreen, or basking locations such as the Königsplatz in spectacular light. ARRI Rental was responsible for installing the SkyPanel fixtures at the famous Munich square and for overseeing the dramatic lighting effects. 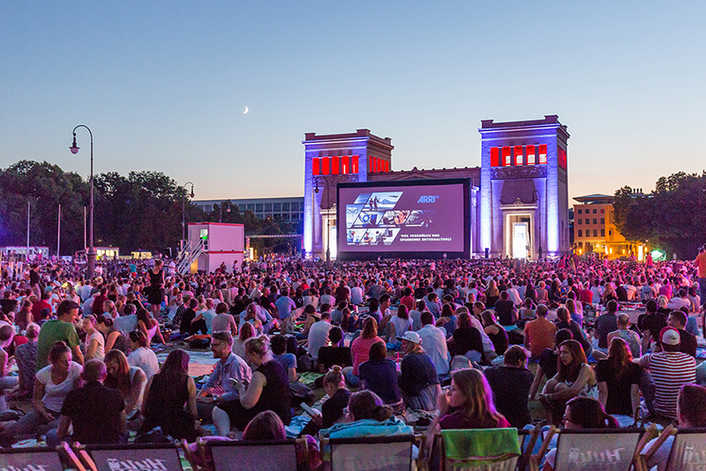 ARRI technology also played a major role in many of the films that were screened on the Königsplatz: six of the eight open-air movies were filmed with cameras from the Munichbased company. The star-studded comedy Kiss the Cook was filmed with the ALEXA Plus, as was The Theory of Everything, about the life of Stephen Hawking, which recorded in the ARRIRAW format. The screen adaption of international bestseller Fifty Shades of Grey was captured with ALEXA XT and the action adventure Big Game was also shot with ALEXA in ARRIRAW. Til Schweiger’s successful movie Honig im Kopf 2 SkyPanel (Honey in your Head) was produced in collaboration with ARRI Lighting, ARRI Media and ARRI Rental, and filmed with ALEXA cameras. Even the festival opener, the German classic Monaco Franze, was shot over 30 years ago with technology from ARRI: in the early 1980s, ARRI Rental provided equipment for Helmut Dietl’s cult series.

Each screening was preceded by the new ARRI ad, produced by ARRI Media, which illustrates the broad range of products and services offered by the ARRI group with clips from internationally successful movies.

About ARRI:
With headquarters located in Munich, Germany, ARRI was founded in 1917 and is the world's leading designer, manufacturer and distributor of motion picture camera, digital intermediate (DI) and lighting equipment. The ARRI group comprises a global network of subsidiaries and partners covering every facet of the film industry, including worldwide camera, grip and lighting equipment rental through ARRI Rental; turnkey lighting solutions through the ARRI System Group; and film production, postproduction, lab services, visual effects and distribution through ARRI Media. In 2013 ARRI Medical was founded to utilize ARRI’s core imaging technology and know-how for medical applications.
Manufactured products include the ALEXA 65, ALEXA SXT, ALEXA Mini and AMIRA cameras; Master Anamorphic lenses; SkyPanel, L-Series and M-Series lights; Pro Camera Accessories and the Electronic Control System; the ARRILASER recorder and ARRISCAN archive technologies; and the ARRISCOPE 3D digital surgical microscope. The Academy of Motion Picture Arts and Sciences has recognized ARRI’s engineers and their technical contributions with 18 Scientific and Engineering Awards.