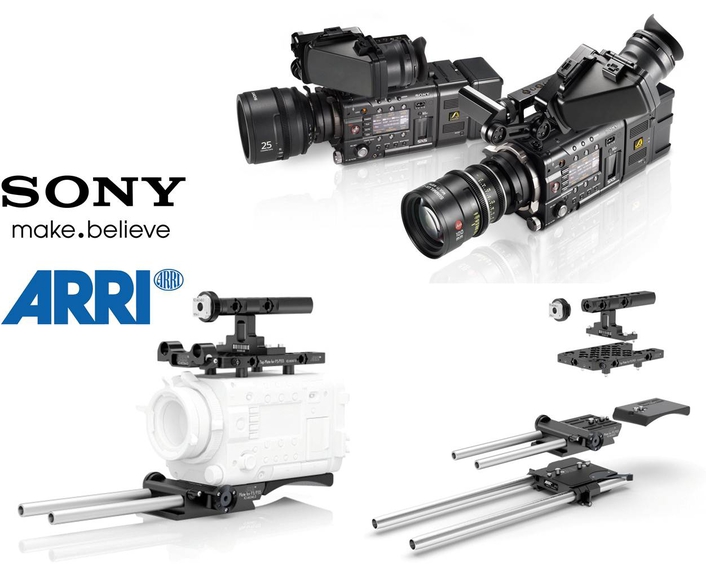 .
ARRI continues to swiftly deliver high quality Pro Camera Accessories for the latest DSLRs and digital cameras with the release of new accessories for Sony’s new F5 and F55. Now these cameras are fully compatible with ARRI support and all industry-standard matte box and follow focus systems.

ARRI Base Plate
Designed specifically for the Sony F5 and F55, this ARRI base plate allows compatibility with lightweight support standards and includes a built-in "Touch and Go 35" plate. The camera can then be mounted quickly and securely to a head or anything else with a standard quick release plate – for example in between takes when shooting handheld. Two ARRI rosettes extend out to the sides of the base plate in order to attach handgrip systems and extensions. For studio configuration, the base plate accepts studio bridge plates such as ARRI’s BP-8 or BP-9.

ARRI Top Plate
The ARRI top plate for Sony F5 and F55 cameras is designed to offer multiple mounting interfaces for accessories. An ARRI handle can be attached at three different positions to optimize balance, although the original Sony handle remains compatible. With its multiple centered interfaces, the top plate can also be used as a low mode plate for Steadicam shots. An optional 15 mm lightweight support rod adapter can be attached to the front of the plate, optically centered to the camera.

ARRI Shoulder Pad
This shoulder pad mounts to the bottom of Sony F5 and F55 cameras via a hand screw and can be used independently of a base plate. When used alongside the ARRI base plate, the shoulder pad can remain in place even when the camera is secured to a head via the base plate’s built-in "Touch and Go" quick release system.

About ARRI:
With headquarters located in Munich, Germany, Arnold and Richter Cine Technik (A&R) was founded in 1917 and is the world's largest manufacturer and distributor of motion picture camera, digital intermediate (DI) and lighting equipment. The ARRI Group comprises a global network of subsidiaries, agents and representatives that covers all aspects of the film industry: design, engineering, production, equipment rental, turnkey lighting solutions, post production, film and sound laboratory services, and visual effects. Manufactured products include the groundbreaking ALEXA digital camera system, film cameras, professional camera accessories, cutting edge LED lighting and DI solutions such as the ARRISCAN and archive tools. The Academy of Motion Picture Arts and Sciences has recognized ARRI’s engineers and their technical contributions with 18 Scientific and Engineering Awards.