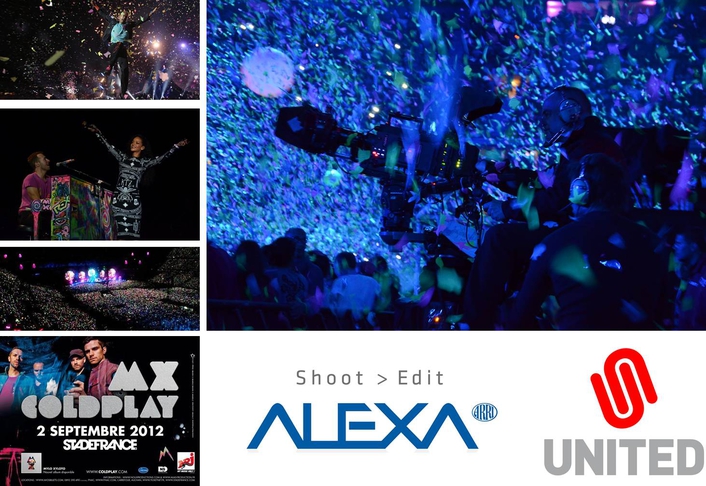 .
ARRI’s new Fiber Remote Option for the ALEXA camera has passed the ultimate field test by being successfully integrated into extensive outdoor broadcast (OB) coverage of a spectacular Coldplay concert at the Stade de France in Paris. The footage forms part of a film titled COLDPLAY LIVE 2012, which will screen in cinemas worldwide for one night on November 13th before its Blu-Ray release on November 19th.

The ALEXA Fiber Remote Option is a version of the ALEXA camera that has been adapted specifically for broadcast-style, multi-camera productions. Using a certified system that includes CopperHead from Telecast Fiber Systems, ALEXA and ALEXA Plus models can be connected through a SMPTE 311M fiber connection and remote controlled for live painting of the image. The system introduces ALEXA’s exceptional dynamic range, latitude, highlight and shadow details, color rendering, natural skin tones, high sensitivity and low noise to entirely new applications, allowing a significant increase in production value for a wide range of televised events.

In May 2012 freelance cameraman Nathaniel Hill was hired as a supervisor by JADigital and began discussing ways to incorporate images of the highest attainable quality into COLDPLAY LIVE 2012 with director Paul Dugdale. The film was to be made up of footage from several concerts around the world, as well as backstage footage, though the action would center around major coverage of the Stade de France gig on September 2nd.

“Paul and I discussed the advantages and disadvantages of having mixed formats on the shoot,” says Hill. “For a long time I have wanted to find a better way of integrating everything the beautiful 35 mm chip cameras have to offer into the broadcast of music events and TV recordings, but found my options limited to having to involve these cameras as a completely separate entity to the main OB shoot.”

Bolke Burnaby Lautier, an Operations Manager at United Broadcast Facilities in Holland, was brought onboard as a technical coordinator and, working with Amsterdam-based rental house Camalot, learned that ARRI was in a position to loan prototypes of the ALEXA Fiber Remote Option. He notes, “I had used high-end cameras from other manufacturers on these shoots before and it was always a disaster because you’re trying to make single cameras work in a multi-camera environment. We did some tests with ARRI’s system and it immediately looked like the perfect solution for integrating the ALEXA into a show like this. We decided to go for it and I can only say that it worked flawlessly, almost as though this was a product we had already been using for years. Directors want to have choices – different looks in different cameras and wider dynamic range. This system is an easy way to provide that.”

Four ALEXA cameras worked seamlessly alongside 17 other HD cameras as part of a vast OB setup. Three of the ALEXAs were equipped with the Fiber Remote Option and were positioned to the front of the stage for a master wide shot, behind the band for tracking reverse shots, and in the pit stage-left for artistic close-ups of the band; a fourth ALEXA was operated wirelessly on a Steadicam for roaming shots on stage. “I knew that the ALEXAs would make a massive difference to the whole look of the production,” says Hill. “The shallow depth of field is beautiful and the latitude was a huge bonus, especially as the show includes moments when the only light in the stadium is from the wristbands worn by the audience, yet at other times pyros light up the sky in bright flashes.”

Hill continues: “Slow motion was important on this project and we were able to record 50 fps Log C in the camera, while Paul could watch a 25 fps Rec 709 image in the OB truck, giving him yet more options in the edit. The ARRI system allowed the vision engineer in the truck to have control of iris, color balance, blacks, gamma, shutter, knee, gain and detail. This all helped to achieve the desired look of the concert on site and to match the ALEXA image and setup with the Sony broadcast cameras. All in all, I am very excited by the possibilities of the system and I have since used it on a three-camera Robbie Williams shoot. Crucially, ARRI seem keen to listen to feedback and make the system adaptable to any number of scenarios: studio-based sitcoms, small or large recordings of music events, or even live broadcast.”

COLDPLAY LIVE 2012 has an exclusive, one-night release in cinemas worldwide November 13th and will be available on Blu-Ray November 19th.

About ARRI: With headquarters located in Munich, Germany, Arnold and Richter Cine Technik (A&R) was founded in 1917 and is the world's largest manufacturer and distributor of motion picture camera, digital intermediate (DI) and lighting equipment. The ARRI Group comprises a global network of subsidiaries, agents and representatives that covers all aspects of the film industry: design, engineering, production, equipment rental, turnkey lighting solutions, postproduction, film and sound laboratory services, and visual effects. Manufactured products include the groundbreaking ALEXA digital camera system, film cameras, professional camera accessories, cutting-edge LED lighting and DI solutions such as the ARRISCAN and archive tools. The Academy of Motion Picture Arts and Sciences has recognized ARRI’s engineers and their technical contributions with 18 Scientific and Engineering Awards.