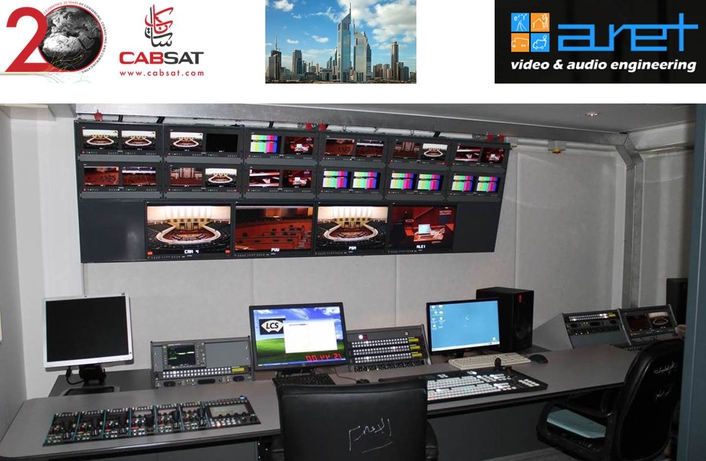 The new television studios of the Kuwait National Assembly
Aret Audio & Video Engineering Srl from Zibido San Giacomo, Milan, is proud to announce its participation as exhibitor at the upcoming Cabsat 2014, 11-13 March, at the Dubai World Trade Center Booth H7-32.

In an international context focused on the Middle East and on occasion of this important meeting with the international Broadcast and Digital Media community, Aret officially invites you to visit their booth H7-32, where it is pleased to host you at their social lounge with friendly atmosphere and dinner invitation, to illustrate their design and production capabilities.

Aret boasts numerous deliveries in the Middle East area both by OB-van, with over 400 units distributed, as well as television studios and Master Control Rooms created over the years, in Saudi Arabia, Kuwait, Bahrain, Qatar, Syria and Lebanon.

A recent example is actually the new television studios of the Kuwait National Assembly, or the Kuwait parliament’s broadcasting studio.

It is a project totally conceived by Aret, specifically intended for television production typical of the legislative environment.

The studio was created in very short time, during the summer cessation of parliamentary activities.

Aret took care of all of the working phases, from design, to the choice of equipment, project planning, installation, commissioning and training.

Destined for use in a legislative environment, the new production direction had to simultaneously allow both live registration as well as transmission of the sessions being discussed by the Kuwait parliament.

On one hand, the recordings were obviously mandatory for the archives, on the other, the part of the filming mimics the typical features of the legislative systems that must rely on broadcast automation capable of creating and recalling the numerous pre-sets of all of the speakers’ stations possible.

The television cameras in the studio must provide all remote commands, given that they are equipped with robotic heads controlled from remote stations and must have the possibility of producing a program complete with logos and a clean feed, just like in a complete TV studio.

Even the advanced graphics characteristics respond to the demands of the sector and can interface with the automated system: the graphic section and character generator can be interfaced so as to be controlled by the speaker’s microphone system.

Basically, every time a member of parliament speaks from their work station, they push a button on the microphone and, automatically, the television camera moves, sets up the frame, broadcasts the images and also pilots the related script with the name of the speaker, superimposed or with other graphic effects.

All of the modular units, including an external DSK are by Ross Video, just like the matrixes with redundant power.

Aret was able to earn this contract based on a typical tender which highlighted the winning choices based on the optimum technical characteristics on a reasonable budget.

The mix of equipment chosen is able to guarantee exceptionally high performance, therefore main units are the Ross Carbonite video mixer, the Ross video matrixes with redundant power and all of the robotics automation.

The tally system and below monitor display is managed in a completely automatic way; another plus of the system is guaranteed delivery time, which represents a determining factor.

The entire system was –in fact- created and delivered in short time, during the summer closure of the parliament, thanks to the complete pre-wiring and commissioning pre-emptively carried out in Milan, followed by shipping and on-site installation that took only two weeks.