ARC-Productions are First Belgian Company to Back MLA Platform 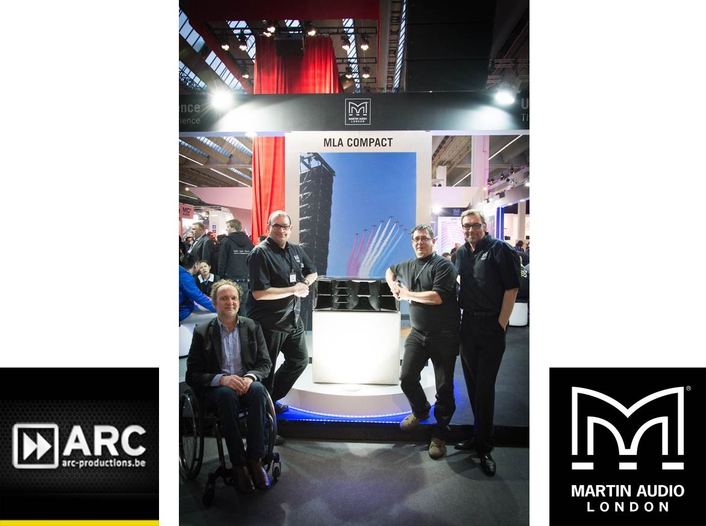 Based close to Ghent in Flanders, Marc De Baets’ sales and rental company, which also provides stage management as part of a full technical solution, has a long history with Martin Audio dating back to the purchase of a W8 Compact in around 2001. He has subsequently invested in WT2, LE1200 and 1500s, WS 218X subs and W8LC.

“His complete speaker inventory has been made up of Martin Audio for many years,” confirms Steven Kemland of FACE, the manufacturer’s Belgian distributor, who serviced the recent order.

Marc De Baets had been operating under his own name before setting up ARC-Productions at the end of 2008, and had been in conversation with Kemland about the MLA from its inception. “The first time I heard the MLA, was on the Summerfestival in Antwerp three ago,” he remembers. “I was particularly impressed with the MLX subs — not only the output but also the weight.

“The biggest advance of the MLA system is the even coverage, making it a great tool to counter undesired noise pollution — a very hot item in Belgium. The compact size and weight, requiring less truck space, were other advantages.” Marc was also present at the MLA Compact European launch in London last year.

Steven Kemland takes up the story. “The MLA Mini he first heard in our demo room. The full MLA system is too big for a mid-range company but with MLA Compact and MLA Mini — supplemented by some DD6 and XD12 or DD12 cabinets — it is possible to manage any job between 100 and 10,000 capacity.”

De Baets had initially planned to buy only the MLA Mini version to run alongside his existing W8LC, but after considering the importance of the sound pollution problem in Belgium, he opted for a complete change and purchased 16 x MLA Mini and 16 x MLA Compact, with four MSX subs planned for next year. Meanwhile the system will be run with ARC-Productions’ WS218X subs.

Delivery is planned for the beginning of April, with system training in Belgium and the system will make its major debut at Leiepop Festival in early May before going on to do other festival work (as well as servicing ARC-Productions’ other busy work programme).

Says Steven Kemland, “Having conducted a lot of MLA demos, which have really got the market talking, it is important to have followed this up with our first system sale in Belgium. This investment is a big step up for ARC-Productions and gives them the opportunity for growth.”

In summary Marc De Baets promises this is just the start of his adventure into the world of MLA. “I really believe in this new technology,” he concludes.