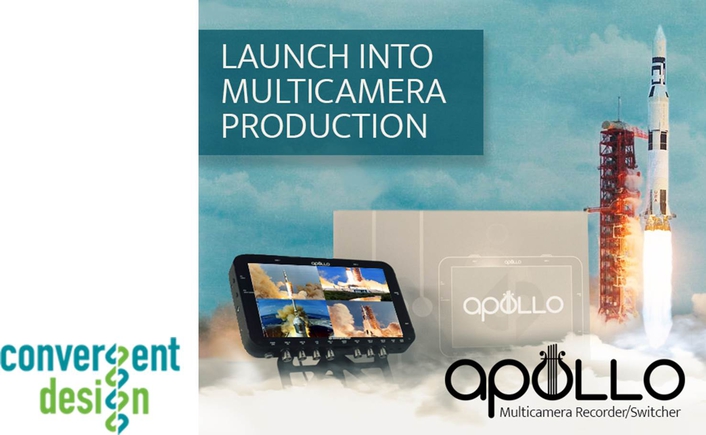 Apollo is designed to answer many modern production needs

Today Convergent Design begins shipping Apollo, the industry’s first truly portable HD multicamera recorder/switcher. Apollo can simultaneously record up to four HD video signals, along with a fifth channel of either a Live-Switch between the four or a Quad-Split reference view. Apollo can also function as a four-channel live switcher while simultaneously recording the four isolated HD video signals. The size of a small tablet and able to run for hours on a camcorder battery, Apollo is truly portable and the only device of its kind that can both record multiple HD camera feeds as well as live-switch between them. It’s a production studio in the palm of your hand.

All cameras stay in perfect sync with matching timecode. A single SSD contains all of the multicamera media, dramatically reducing turnaround time for post. There are two SSD slots on Apollo, allowing for twice the record time or (coming soon) mirror recording for safety backup. Apollo utilizes industry-standard 2.5” SSD media, either manufactured by Convergent Design or qualified 3rd party models.

Using the CD Apple ProRes Transfer Tool, recordings can be exported as separate Apple ProRes files with matching timecode and file names, or in the future as a single multicamera QuickTime file that drops directly into the timeline of supporting NLEs.

“Apollo is designed to answer many modern production needs.” said Convergent Design President Mike Schell. “Field producers can take it on location, record from any four HD cameras, view a quad-split playback on the way home and drop all four cameras in perfect sync into a single timeline to dive immediately into an edit. Reality programs shot in cramped cars with tiny cameras can slip Apollo in the glove box or under a seat. A concert performance can be captured by recording four camera ISOs along with recording a Line Cut that can also be sent to a large live display at the venue. Live-streamed events can be covered with four-camera switching without having to bring in a large flypack. Apollo can also be used as a secondary recorder/monitor; using our battery & wireless video receiver bracket makes for a great handheld Director’s Monitor. And Apollo’s advanced built-in Image Analysis tools can be used to match the cameras during setup. Apollo addresses many modern multicamera field production needs in a single 1” thick device.” 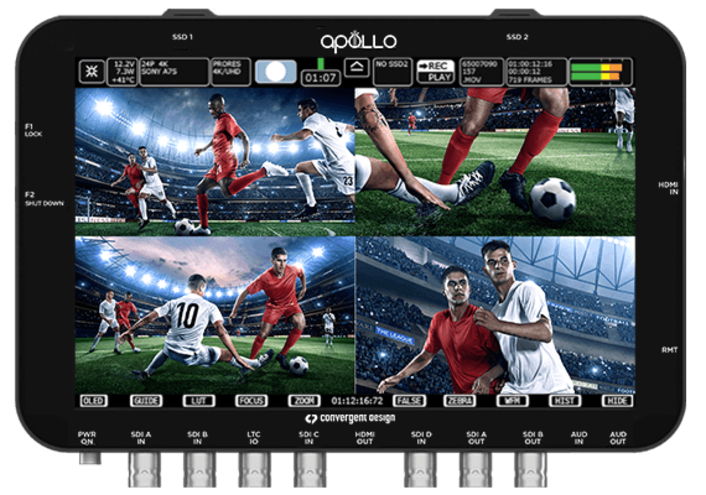 Additional functions are planned for release in the first quarter of 2016, including two-channel 4K/UHD video recording, DNxHD recording, and cascade interconnect between up to three Apollos for up to twelve HD channel or six 4K/UHD channel simultaneous recording. These and other additional functions will be made available via a free firmware update. A remote keypad control unit will be offered along with a rack mount and other accessories.

Apollo is available now through Convergent Design’s worldwide dealer network. Manufacturer’s list is $3995, with an SSD to USB3 adapter, a 5-pack of SSD mounting handles, and a universal AC power supply included. Owners of the Convergent Design Odyssey7Q and Odyssey7Q+ can purchase an Apollo Option for their devices as an upgrade for $1795.