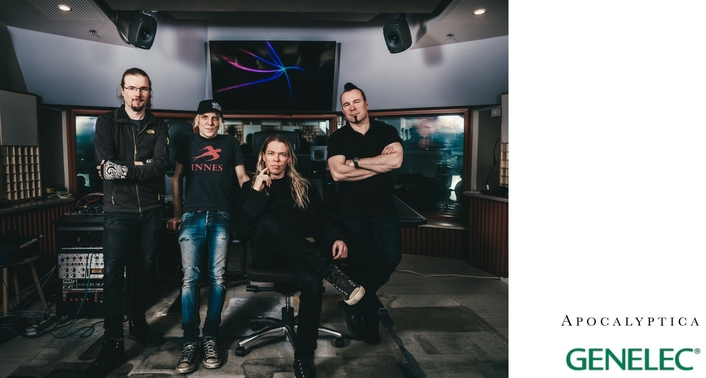 Combining cellos and heavy metal is no easy feat, but Platinum-selling Finnish band Apocalyptica have never settled for anything short of the extraordinary. Formed in 1993 as a classical tribute to Metallica, Apocalyptica quickly grew to become one of Helsinki’s most famous musical exports, selling millions of albums worldwide whilst pioneering the genre of cello metal. Given the challenges posed by an instrument with an “unpredictable, dynamic sound”, the band have long pursued a sonically superior recording set-up, particularly as they now often record and mix in different locations. The answer has come courtesy of a partnership with an equally famous Finnish name: Genelec, the world leader in active monitoring.

The members of Apocalyptica – Eicca Toppinen, Paavo Lötjönen, Perttu Kivilaakso and Mikko Sirén – have much in common with Genelec, not least their core desire to push boundaries with hard work and innovative ideas. Also similar is the tremendous international success they have enjoyed whilst remaining characteristically true to their Finnish roots. It is perhaps no wonder that the band have adopted The Ones 8341 three-way coaxial monitors as the last word in uncoloured, absolutely consistent monitoring – no matter where they work.

“This is pioneering work, it hasn’t been done before,” explains Paavo Lötjönen. “The sound of a cello is very dynamic, whereas many electric instruments are far simpler to capture in terms of EQ and forming an audio image. In contrast, the sound of a cello is everywhere, there’s a lot of bass, a lot of high frequencies, many different colours. If you have low quality monitoring, you can’t hear all of those colours.”

“I’ve never had a speaker with such high definition, it’s just so natural,” adds Eicca Toppinen. “You don’t hear left and right, you hear precisely where the sound is located in the stereo image. Also, we work in different rooms which sound completely different. I have my own studio where I work and then the guys often listen somewhere else. So, for us it’s a big benefit to be able to calibrate each of those spaces using Genelec’s GLM software, and to achieve a consistent, reliably neutral sound. I can really trust what I hear. You can catch details that were not audible before.”

“We need a completely trustworthy sonic reference,” agrees Lötjönen. “With GLM, the results are consistent for everyone.”

Musing on the similarities between Apocalyptica and Genelec, Toppinen points to Finland itself as powerfully influential. “Here we are living in the woods, in the middle of nature! We need to create new ways of living, surrounded by nature. That’s something we share with

Genelec. I see a bright future for our relationship because the basis of our cooperation is heartfelt. We want to create something together.”

Lötjönen agrees: “What we do is kind of unique! But you must trust yourself and your vision and follow your own path. The same is true of Genelec. It’s the Finnish mentality.”

The relationship between Genelec and the band will become even closer on April 11th when Apocalyptica - currently in the studio recording a new album - will have full access to Genelec’s Instagram feed for a social media takeover. Tune in that day to see the band post their activities online, including a livestream via Facebook at 15:00 GMT.

About SAM  SAM (Smart Active Monitoring) technology has been developed and refined by Genelec for more than a decade to allow studio monitors to be networked, configured and calibrated for the user’s specific acoustic environment. Each SAM monitor or subwoofer is equipped with advanced internal DSP circuitry, which tightly integrates with the GLM (Genelec Loudspeaker Manager) software application, running on Mac or PC. GLM’s reference microphone kit allows the user’s acoustic environment to be analysed, after which GLM’s AutoCal feature optimises each SAM monitor for level, distance delay, subwoofer crossover phase and room response equalisation, with the option of further fine tuning by the user. By minimising the room’s influence on the sound, SAM monitors deliver an unrivalled reference, with excellent translation between rooms.

About Genelec
Since the founding of Genelec in 1978, professional audio monitoring has been at the core of the business. An unrivalled commitment to research and development has resulted in a number of industry firsts and established Genelec as the industry leader in active monitors. Forty years later Genelec monitoring products remain true to the original philosophy, offering reliability, neutral sound reproduction regardless of size, as well as the ability to adapt to the acoustic conditions of the listening environment. Genelec customers receive paramount support in the field, from acoustical advice and calibration services to technical service and long product life span. Buying a Genelec product is a secure long-term investment in outstanding and reliable audio monitoring