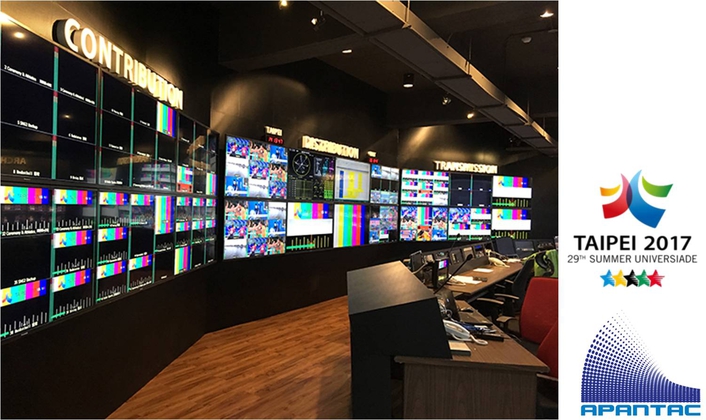 Apantac, provider of cost-effective multiviewers, video walls, extenders, and signal processing solutions today announces that its award-winning Mi-16 series of Multiviewers is being used in the master playout center for the Summer Universiade Games in Taipei, Taiwan.

Universiade is considered the Olympic games for college and university students all over the world and the XXIX Summer Universiade and is held from August 19th to 30th 2017 with venues located in Taipei City, New Taipei city, Taoyuan City, Hsinchu County, Hsinchu City and other neighboring counties. The Universiade covers 12 days of sporting competition and involves a total of 22 sports and 270 gold medal events. More than 150 countries are expected to participate in the Summer Universiade, making it a major media event.

Due to time challenges, a key goal for the Universiade International Broadcasting Center (IBC) was to find fully featured solutions that were easy to install and configure. In order to ensure redundancy, the IBC was designed to receive the feeds from all the venues with both IP and fiber transport. Thus, there are twice as many video streams to be monitor. Apantac worked with chief consultant Mr. Cloudy Chen to deliver a plug-and-play solution to the Universiade IBC that addressed their multi-image monitoring requirements within a specified budget.

The technical team at the International Broadcasting Center has installed Apantac’s Mi-16 video multiviewers to monitor all the camera feeds from a total of 79 venues (38 competition venues and 41 training venues), including the opening and closing ceremony, which are held at the Taipei Stadium. Twelve Mi-16 Multiviewers, each configured to 16 images, will feed multiple displays in the International Broadcasting Center’s master playout room.

According to chief technology consultant for Summer Universiade, Mr. R.Y. Chen, “Apantac Mi-16 Multiviewers are a core part of the infrastructure master playout center at the Universiade International Broadcasting Center. We have worked with Apantac technology for a number of years and we know that their Multiviewers are resilient, flexible and can withstand the intensity of these types of events. Apantac also has a strong regional presence and local support team, which is important to the success of our project.”

During the VIP tour the week before the opening ceremony, the mayor of Taipei commented that this year’s Broadcast Center setup for the Universiade surpassed all others before it.

“We are extremely excited to be a part of the Summer Universiade Games,” comments Thomas Tang, President of Apantac. “Our Mi-16 Multiviewers ensure that the technology team can monitor all feeds from the event anywhere and at any time.”

One of the unique features of the Mi-16 series was a clear choice for the technology team; its 3G passive loop outs. This proprietary technology developed by Apantac means that a source will never be lost, even if the multiviewer is turned off or goes down. The Mi-16 multiviewers also offer intuitive yet sophisticated layout capabilities through its custom on-screen display software. The screen layouts can be freely arranged, and audio meters, clocks, logos, and text can be added to the display surface for additional on-screen information. On-Screen audio meters can be displayed from embedded audio from the SDI sources if necessary.

Another key feature that made the Apantac Mi-16 multiviewers particularly attractive for this project was its source duplicating function and internal routing. This eliminates the need for external routers, which is a feature only found in expensive multiviewers.