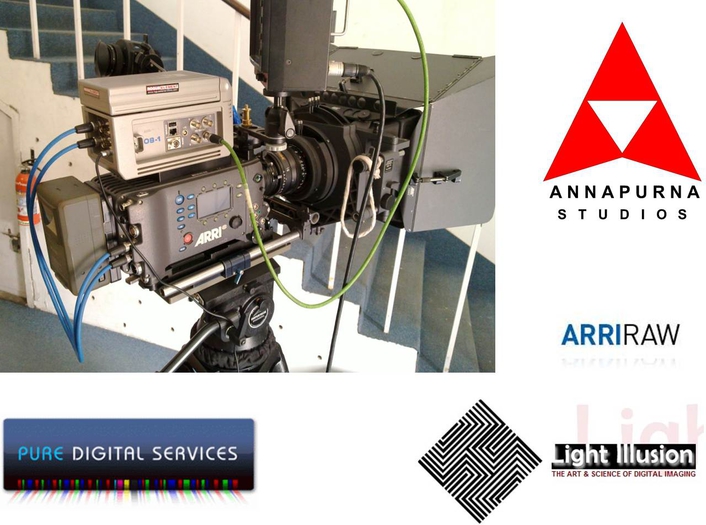 With many DPs now gearing up to shoot ALEXA RAW there is a growing need for a thorough understanding of RAW workflow
Leading digital service provider Pure Digital Services and digital film consultancy Light Illusion recently conducted a comprehensive demonstration of a complete ARRI Raw workflow at Annapurna Studios’ new state of the art Digital Intermediate facility in Hyderabad, India.

The demonstration, which was attended by some of India’s top Directors of Photography, was designed to highlight the speed and versatility of collaborative systems coming together to execute smooth real time workflow from ‘Scene to Screen’.

With many DPs now gearing up to shoot ALEXA RAW there is a growing need within the film industry for a thorough understanding  of RAW workflow.  Light Illusion, which provides specialized consultancy to clients in the fields of Digital Intermediate, Digital Cinematography and Colour Management, was asked to conduct the demonstration at Annapurna Studios after building and installing the new Digital Intermediate Facility, which houses a fully fledged 4K SGO/Mistika DI system in a highly calibrated environment catering for a wide variety of delivery formats. Light Illusion is a development partner with SGO and also represents SGO/MISTIKA in the Indian sub continent.

The Mistika system at the heart of Annapurna’s DI facility has an 84 TB SAN that has the ability to work on 4K+ footage in real time in a completely calibrated environment with a high-end Cineo 32 projector, Penta Studiotechnik and waveform monitoring from Omnitek. Annapurna also has 2 ARRI Alexas and 2 RED MX cameras. 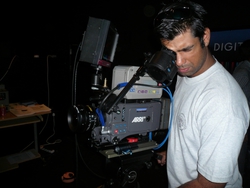 Light Illusion directors Steve Shaw and Sundeep Reddy have both worked on many feature films around the world and are extremely well versed in high-end post production operation, workflow and DoP.  Dan Mulligan, head of Pure Digital Services, was drafted in to assist on the basis of his extensive experience of high end RAW workflows. As a renowned cinematographer, Mulligan was one very first people in the world to receive ARRI RAW certification.

Sundeep Reddy explains: “Pure Digital Services is represented in India by Light Illusion and our relationship with Dan goes a long way. Given Dan’s extensive experience in RAW workflow and our close ties with him, it made perfect sense to involve him in this hugely important event.”

To conduct the demonstration, Light Illusion and Pure Digital Services created a unique concept that involved setting up a mobile Digital Film Lab that showcased a workflow where a production could shoot ARRI RAW on RAW recorders on S-two OB-1s and then transfer the footage over mini RAIDs/fibre to the Mistika system. During the transfer the system performed a de-bayer, applied a LUT, graded to the client’s liking and delivered the necessary output, all in REAL TIME.

“The DPs performed a series of tests on various skin tones, dynamic range and colour rendition, within the Studio premises,” Reddy explains. “ The equipment we had for the demonstration included an ARRI ALEXA camera, S-TWO’s OB-1 onboard RAW recorder, Flash Dock with LTO-4 writers, G-tech mini RAIDs, PENTA STUDIOTECHNIK Monitor, Projection Design Cineo 32. The demonstration went incredibly smoothly and the DPs were very impressed with the results. We were very sure that it was all going to work as we had been testing the workflow for some time and as a result we did not encounter any problems or technical snags.” 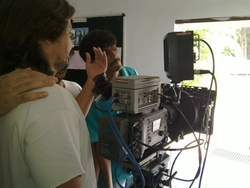 “As a cinematographer, Dan brings a lot of experience to the table,” he explains.  “A lot of Film DPs find comfort in sharing their experiences and allowing Dan to explain the workflow and also absorb creative pointers.”

Mulligan’s expertise with ARRI RAW has recently led his company into a relationship with SGO Mistika, which has resulted in the development of the world’s first on-location ARRI RAW full resolution workflow toolset. This unique on-set delivery system is based around the ARRI RAW T-Link image capture format and enables Mistika to deliver full 3K resolution playback in real-time and full technical debayer on-set. This opens up tremendous possibilities for delivering on-location, a fully debayered 3K DPX with full real-time playback, the same day for full QC and dailies playback.

Commenting on the Annapurna demonstration, Mulligan says: “This ARRI RAW demonstration highlighted the tremendous amount of research and development that Light Illusion and Pure Digital Services have put into making ARRI RAW workflow easy for customers. Light Illusion provided invaluable input and by combining our resources and expertise we were able to demonstrate a full ARRI RAW solution with amazing results.”

Annapurna Studios is one of the very first DI facilities in Asia Pacific and is the first in India to have had the opportunity to test and work on ALEXA RAW footage.

Commenting on the recent demonstration, Senior DoP Rasool Ellore says: “With the evolution of faster technology and workflow the future certainly looks bright. Digital seems to only get better and it certainly looks like a winner.  Dan’s help and experience is a big advantage to any production because valuable time isn’t being spent re-inventing the wheel on set.”

The success of the demonstration at Annapurna has already resulted in plenty of interest from DPs and productions to shoot ALEXA RAW, and has also generated a significant number of enquiries for the expertise offered by both Light Illusion and Pure Digital Services.

Light Illusion has become one of the industry's leading figures in digital cinematography and digital intermediate operations, with support provided globally to production and post-production operations, as well as being provided to equipment manufacturers. Both Steve Shaw and Sundeep Reddy have numerous credits for feature film DI and grading work, as well as acting as digital film technologists helping to build global digital film operations.