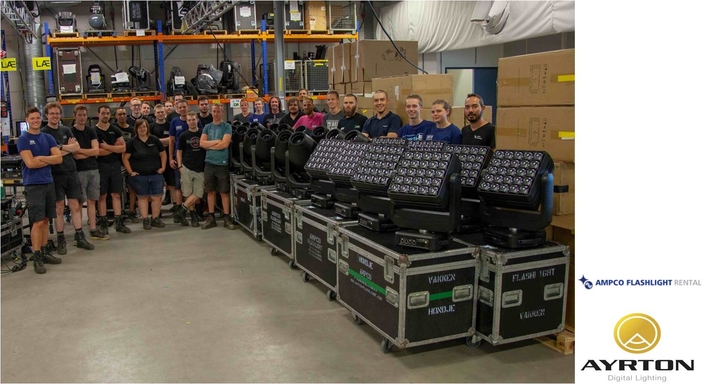 Dutch rental company, Ampco Flashlight Rentals, has invested in Ayrton Ghibli™ and Ayrton MagicPanel™FX fixtures for its rental stock to meet the rising demands of its customers. This is the first time the company has purchased Ayrton fixtures for its inventory and is very excited at the prospect of making these units available to its broad customer base.

Ghibli is Ayrton’s first factory-equipped fixture with a 100% framing system, and an impressive 23,000 lumen output from a 600W source, with an incredible 80% efficiency that makes it powerful enough for large scale arenas. It has a full feature set and an 8:1 zoom delivering a 7°-56° beam spread, and is the smallest, lightest fixture - with the best performance to size ratio of any hard-edge LED or metal halide product - in its class.

Ampco and Flashlight originated as two separate companies in the late 1970s as house suppliers for artists in concert and theatres, both expanding into rental and sales operations before merging in the early 2000s. From there Ampco Flashlight grew into a major supplier for lighting, audio and rigging and developed its acclaimed Me Trao audio measuring systems and CyberMotion motion control systems.

Ampco Flashlight was most recently responsible for the supply of all lighting, rigging, motion control and video to the Eurovision Song Contest 2018 when it took place in Lisbon in May, with nearly 800 Ayrton fixtures in Jerry Appelt’s incredible lighting design.

“We’ve had many favourable reports about Ayrton from the people we work with over the years and first saw Ghibli presented at a tradeshow,” says van der Haagen, “but Eurovision gave us first hand, in depth experience of what Ayrton fixtures are truly capable of and our experiences so far have been very good.

“Ayrton products are good quality, with great performance and are widely known and accepted in the industry. There continues to be a rising demand for Ayrton from lighting designers which we are eager to meet.”