Aladdin The Musical Opened With DPA 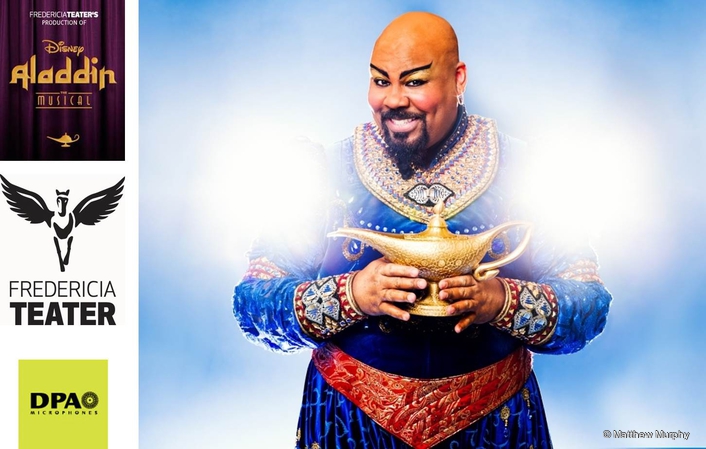 The combination of exceptional sound quality and discrete wearability makes DPA the microphones of choice
Denmark’s Fredericia Theatre is using an extensive selection of DPA microphones to capture the audio for a very special musical production of the Disney classic Aladdin. All of the cast members are using DPA d:fine™ Headset Microphones, which were chosen for their discrete size, comfort and exceptional sound quality. DPA microphones also feature heavily in the orchestra pit, where a combination of DPA d:vote™ 4099 Instrument Microphones, 2011C twin diaphragm cardioid microphones and 4015C wide cardioid microphones are handling the audio requirements.

The Fredericia Theatre’s Aladdin production, which premiered on October 4th 2012, is a significant endorsement of the theatre’s ability to produce exceptional musicals. After hearing glowing reviews from a number of US directors who had worked at the Fredericia, the Disney Group chose the theatre as its only European partner for this brand new musical. 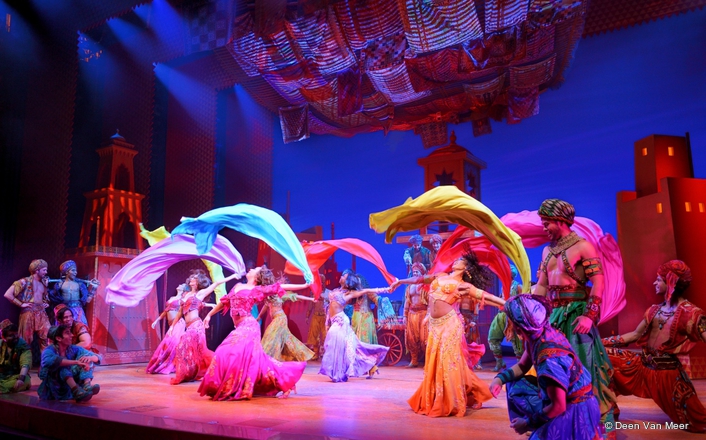 Søren Møller, Artistic and Executive Director of the Fredericia Theatre, says: “We are thrilled that our theatre is one of only five in the world that Disney has asked to partner with – and the only one in Europe. At the Fredericia, we are committed to the development of new musical theatre and the presentation of Danish and European premieres. Our focus is very much on nurturing talent to support our productions and for the last 12 years we have been working closely with the Danish Musical Academy, a school for musical performers that now delivers approximately 80% of our cast members. We also take technical innovation very seriously and like to partner with equipment manufacturers so that we can push the boundaries in terms of what can be achieved. DPA fits this brief perfectly because its products offer very high quality audio and its headset microphones are so discrete that they don’t deter from the casts’ performance.” 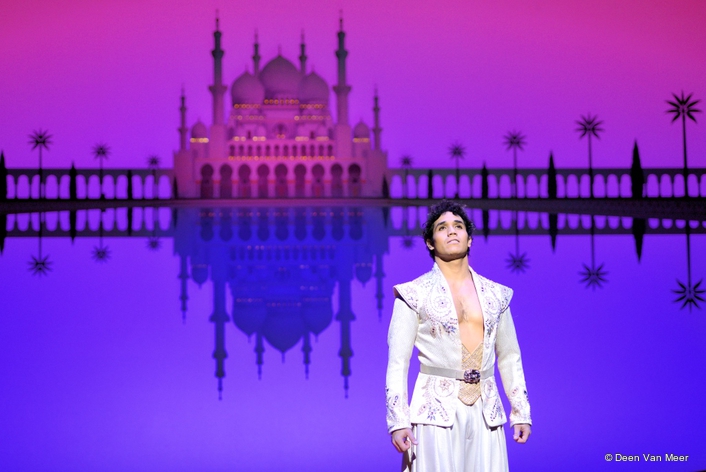 Tim Andreasen, the theatre’s sound director, says: “I wanted to get as close to the sound source as possible, which is why we didn’t go for the really short boom. By having a selection of long and mid-length booms we could pick exactly the right length for each cast member so that the microphones were on the side of their faces where they didn’t show, but were still very close to their mouths. From an audio perspective they sound great and are so discrete that they blend in perfectly. I also love being able to change a microphone without having to detach its cable. This is a really useful feature when you are doing a live performance and don’t want to disturb the actor too much.” 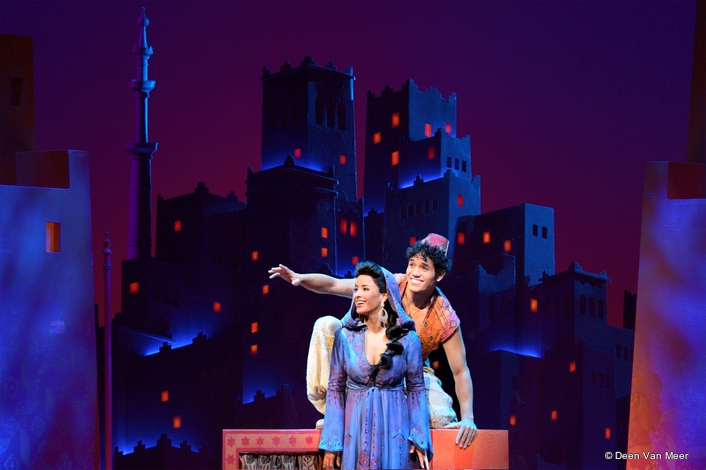 At the request of the theatre, DPA also supplied one of the d:fine microphones in a special blue colour so that it blends in with the genie’s theatrical make-up.

“I was really delighted that DPA went the extra mile to create a blue microphone for our genie,” Andreasen adds. “It blends in perfectly with his colour and is hardly visible to the audience, which was the effect we wanted to achieve. All of our other d:fines are brown and when I first saw them I thought they might be too dark, but when the cast have their make up on and have their hair done, the mics suddenly disappear. Brown is actually a great colour for this production.”

The production also uses four DPA 4061 omnidirectional miniature microphones to capture the sound of Aladdin and the genie’s feet when they are tap dancing. 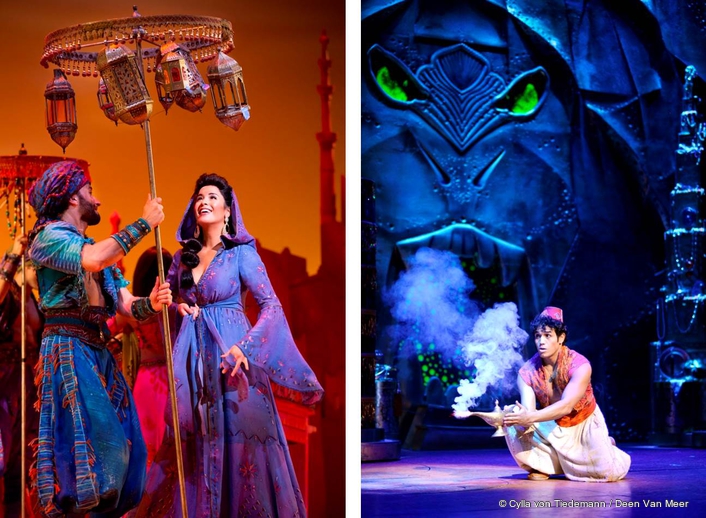 “During their tap dancing scenes we place one microphone in each leg of their trousers and fix them with tape so the microphones are just sticking out below the hem,” Andreasen explains. “We have tried this before and find it works much better than placing mics on the floor.”

“The 2011C microphones are used for the horns and reed instruments, as well as for overhead micing,” he says. “I chose this model because it delivers exceptional sound quality and because I particularly like it’s off axis response. These groups of instruments are placed close together and the ‘bleed’ from the different microphones sounds really good – you feel that you are very close to the sound source even if you are actually a bit further away. For percussion I am using three DPA 4015C microphones that are carefully spaced around the instruments so that the overall sound feels very intimate.” 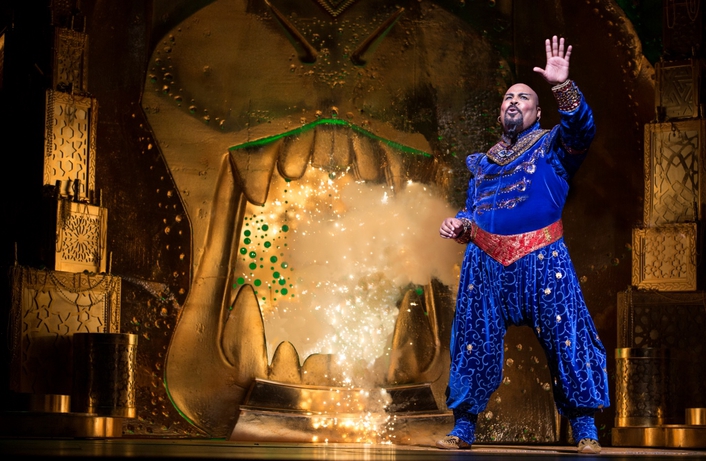 Andreasen adds that he is also using DPA d:vote 4099 instrument microphones for specific instruments that really benefit from close micing, most notably the drums, strings, bass and woodwinds.

“It is hard to balance a bunch of different instruments without close micing everything but the DPA microphones we have chosen and the positions in which we have placed them has resulted in a fantastic overall sound,” he says. “DPA have always been my favourite microphones for theatre work and for this production they are perfect. We carry out some EQ-ing, although nothing at the low end. Our approach to EQ is to only use it where we want to make a particular part of the sound stand out in the mix.”

The Fredericia Theatre’s production of Aladdin has been so well received by audiences and reviewers that the run has been extended. DPA is delighted to have played a part in this unique European musical success.