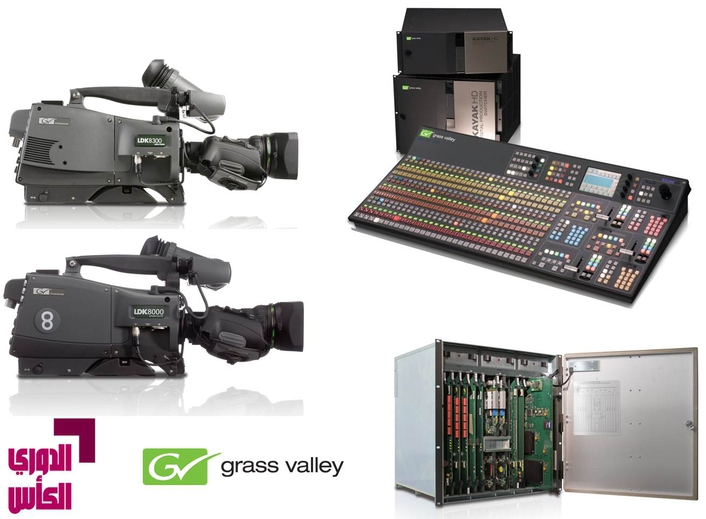 Al Kass has also produced in 3D, with its first official 3D production being the 2010 Emir Cup finals on May 15, 2010 in Qatar
Al Kass, the Gulf region's premiere sports broadcaster, is adding to its outside broadcast capabilities with two large outside broadcast trucks being built by Grass Valley™. The two trucks and their support vehicles, together valued at approximately $15 million (€11 million), will give Al Kass the capability to cover larger events in across the region.

Al Kass began HD broadcasting in 2009, based on a Grass Valley infrastructure using K2 media servers and routing. At that time, it operated two outside broadcast trucks using Grass Valley cameras and production switchers. With the ever-growing interest in sports in the Middle East, and the increasing popularity of the region to host global events, Al Kass is now adding large-scale production capabilities.

Both new outside broadcast units are trailers with full-length expansion. OB 3 will normally carry 10 Grass Valley LDK 8000 Elite HD cameras (two with Grass Valley wireless transmission) and a further five LDK 8300 Live Super SloMo cameras. Inside the truck is a 4 M/E Kayak™ production switcher with a Kayenne™ XL control panel, including FlexiKey™ programmable clean feed and M/E Couple, giving the unit the capability of producing multiple versions of an event, for local, regional, and international feeds, for example, as well as feeds for in-stadium displays.

OB 4 will have the same capabilities as OB 3, but will normally carry seven LDK 8000 Elite cameras and two LDK 8300 Live Super Slo-Mo cameras.

Both trucks are pre-wired for 15 standard-speed HD cameras and five Super Slo-Mo HD cameras, so that adding further capacity from Al Kass’s extensive fleet of Grass Valley cameras is easy. Each unit will have a support truck, one of which has a glass-walled studio for onsite presentation.

“Since the foundation of Al Kass, we have looked to Grass Valley as our professional partner,” said Samer Younes, Technical Advisor of Al Kass. “While we had already decided to use Grass Valley cameras and switchers, the Grass Valley Systems Group demonstrated clearly that they could undertake the entire project, building trucks to suit our requirements exactly, including the challenge of providing effective air-conditioning for the Gulf region where outside temperatures can reach over 50°C [122°F].

As a leader in the region’s sports productions, Al Kass has also produced in 3D, with its first official 3D production being the 2010 Emir Cup finals on May 15, 2010 in Qatar, using Grass Valley LDK 8000 cameras.

“The Middle East is a region of rapid broadcasting growth, especially in sports, and Al Kass is one of the strongest sports broadcasters in the region,” said Jeff Rosica, Executive Vice President for Grass Valley. “We are really pleased to be working with them on this project to increase their outside broadcast fleet, using our proven technology not just in cameras and switchers but in the all-important ergonomic and practical details of mobile production.”

As well as cameras and production switchers, the trucks will also be equipped with Grass Valley Trinix™ NXT routers and GeckoFlex™ modular infrastructure products. System design and integration, including the incorporation of third-party products, will take place at Grass Valley’s OB center of excellence in Weiterstadt, Germany. The new fleet will be delivered by September 2011 to meet Al Kass’s production schedules.