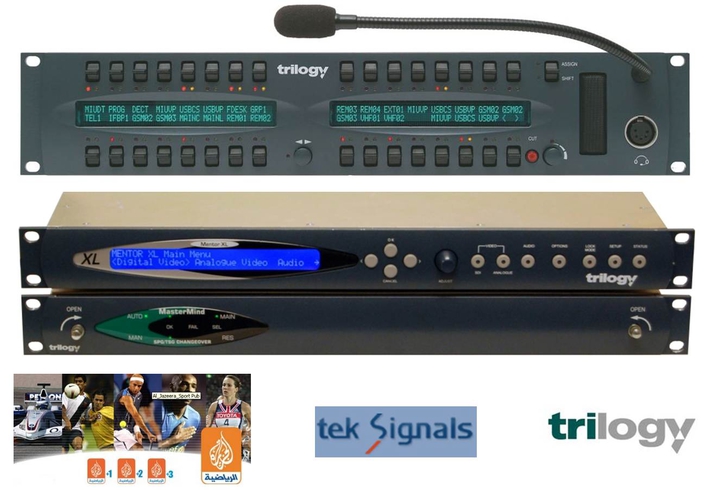 Supplied by systems integrator TEK Signals, this installation consists of three 36 port Commander Intercoms that are configured to run from two matrices. The first system supports both Edit Suites and Al Jazeera Sports News, which broadcasts a one hour sports roundup daily. Each of the other two systems is assigned to a studio that takes in a clean feed from the UK, primarily football. The studios then add match commentary and discussion with pundits, one in Arabic and the other in English.

These systems are E1 networked to each other and back to a central master control room (MCR) allowing for seamless operation between users in the different studios. Additionally all three studios operate a number of lever key operator panels, UHF wireless beltpacks for floor managers and In Ear Monitoring (IEM) systems for the presenters.

Building on the robust communications performance of Commander, Al Jazeera Sports has also ensured the ultimate resilience of its other broadcast systems through the installation of dual Mentor XL master reference generators in each of the three studios. The units are equipped with a range of options including; HD Test Signals, Tri-Level Sync, Timecode and Vector, the browsable application that allows remote configuration and monitoring of all system parameters. The Mentor XLs were also specified with GPS receivers which allow for all video, timecode and audio signals to be locked to a single stable reference.

Joseph Varghese, Division Manager at Tek Signals, comments: “Al-Jazeera Sports needed a communications system that they could depend on during live broadcasts, with full confidence that it would not fail. With experience of Trilogy systems spanning over a decade, Tek Signals were confident that they could rely on their products to provide the right communications systems on budget and on time.”

Teksignals sets standards as a professional consultancy in the fields of Broadcasting, Telecommunications, Test & Measurements, Multimedia, Education, Instrumentation and Professional Systems. Teksignals is truly an innovator and leader in the integration of performance and different technologies. The expertise gained has given the firm a strong local and international client base and a "can do well" reputation. Teksignals believes their industry has no boundaries and they are continually striving to develop and implement new and unprecedented practical design solutions.
Over the last twelve years, Teksignals have made tremendous progress in quality, reliability, and consumer acceptance and Teksignals continues with the aim to provide total turnkey / integration solution to the Broadcasting and Telecommunication Industry.Teksignals is focused and determined to continue providing complete quality solutions to its clients.
Tek Signals was the first in the Middle Eastern company to design and install, 3D Studios in the Middle East. To date they have installed three 3D Studios in Doha alone.

Trilogy has supplied audio communications equipment to customers in more than seventy countries since 1986. The company was originally formed to design and build video and audio infrastructure equipment for the television and radio broadcast market. It continues to serve this market but now also offers its products to a wide array of customers in defence, emergency management and training and simulation, oil and gas, gaming, and other industries. Trilogy counts some of the world's best known names among its customer base. These include BBC, ITV, CBS, Hearst-Argyle, Fox TV Poland, France Television, Arqiva, Star TV, Times TV, Qatar TV, Reuters and many others.