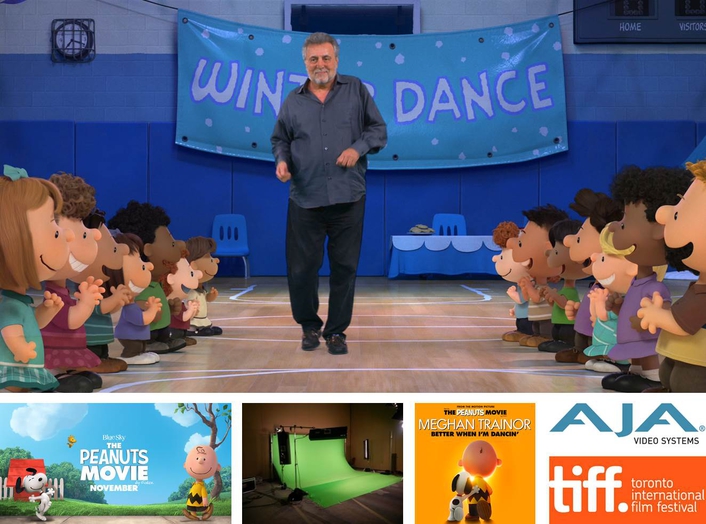 Entertainment journalists got a chance to boogie with the Peanuts gang this fall during Fox's press screening of "The Peanuts Movie" at the Toronto International Film Festival (TIFF). Los Angeles based visual effects company BlueScreen LLC, working with Junket Productions and Fox, oversaw the on-site shoot, which captured 60 journalists dancing on-camera to Meghan Trainor's new song from the movie's soundtrack "Feels Better When I'm Dancing." The footage was composited live with a CG scene featuring a Soul Train dance line style of Peanuts characters, played back via AJA Ki Pro Rack. Each take was then recorded to CF cards, which Fox sent to press ahead of the film's debut for use in on-air segments about the movie.

Bob Kertesz, owner of BlueScreen LLC, mapped out his workflow ahead of TIFF. Having implemented many green screen shoots for press junkets prior, he knew he’d need a reliable playback device, one that he could easily ship to and from Toronto and play back the animated footage multiple times throughout the day without any system failure.

Opting to use Ki Pro Rack, he shared, “This was a one shot deal; we only had these journalists for a day, and had to shoot more than 120 back-to-back takes. If equipment failed, it would have jeopardized the entire production, but I never questioned my Ki Pro Rack. It’s a great piece of gear that I never worry about on set; it’s built solidly and is remarkably reliable under battle conditions. There really isn’t any better recording and playback device out there for live compositing work.”

Prior to the shoot, Kertesz set up his equipment; he quickly dragged and dropped a 1GB file containing the animation from Fox to the Ki Pro Rack’s KiStor drive and was ready to roll. “Ki Pro Rack saved me a lot of time and frustration on this one,” he said. “I was able to get my ProRes HQ file to the device in under 45 seconds, without having to go through 19 steps and without any transfer loss in the quality of the footage. The ability to transfer files to the Ki Pro Rack over the network, or directly to the KiStor media via FireWire 800, makes the entire system extremely versatile.” 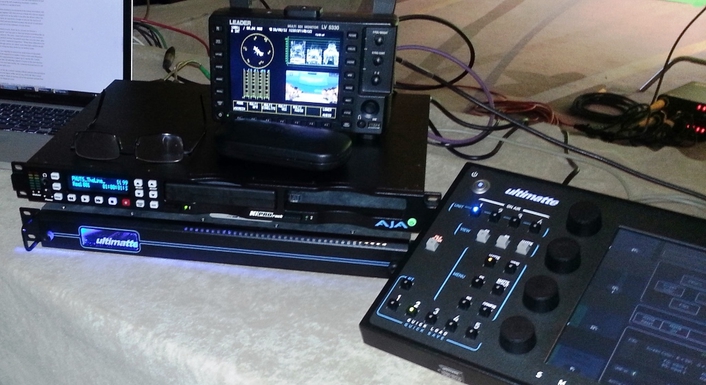 Using a Sony camera, Kertesz shot live action footage of each reporter dancing on green screen, while the Ki Pro Rack repeatedly played back a ProRes HQ animation file of the Peanuts gang dancing on the gym floor. To combine the two scenes and make it appear as though each reporter was dancing with the animated characters, Kertesz used an Ultimatte 11 Deluxe live compositing box. He set the composited output to an external recorder equipped with CF cards; monitors also surrounded the set, allowing journalists to watch themselves on-camera as they made their way through the animated Soul Train dance line, encouraged by characters from the Charles Schultz comic along the way.

Summing up his experience, Kertesz concluded, “Ki Pro Rack is ideal for what I do. In terms of setup, the embedded audio is fantastic, and it genlocks, which is a big deal when you need to integrate into any kind of professional workflow, and unlike the vast majority of technology today, it also has analog audio outputs. That made it easy to feed the speakers and mixer on this project, which was crucial to playing music on set and getting people in the mood to dance.”