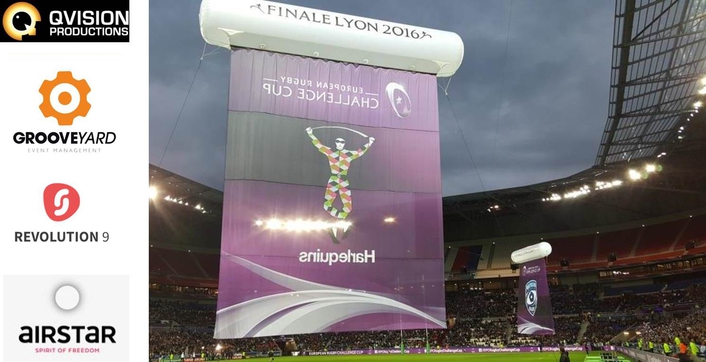 Airstar, leading French manufacturer and provider of inflatable structures and lighting balloons for the event industry, was recently trusted to enhance the off-time entertainment of major Rugby and football tournaments in world class stadiums with its Skyflag solution.

For the second year in a row, Airstar’s unique helium inflated cylindrical balloons were chosen by Event production company QVision Productions to celebrate the 2016 Emir Cup at Al Sadd stadium. Created in 1972 and organised by the Qatar Football Association, the Emir Cup is contested every season by 18 Qatar Stars League and Second Division teams. The Emir Cup branded Skyflag was used to deploy an impressive flag printed with the coveted cup. Despite a narrow tunnel and strong winds, the Skyflag was proudly positioned in the pitch during the national anthem, minutes before the Final kickoff.

Another major sport benefiting from the uniqueness of the Skyflag was European Rugby, with a number of Guinness Pro 12 games as well as the European Challenge and Champions Cup finals, in Lyon, France.

For the Irish clash between Leinster and Munster in the Guinness Pro 12, Grooveyard Event Management specified a black Skyflag hoisting the Guinness brand which took pride of place on a gigantic 12x10m flag in Dublin’s Aviva Stadium. The success was such that the organisers decided to repeat the experience for the final in Murrayfield – the home of Scottish Rugby – a second Skyflag of similar dimensions was added after the game, to greet the winning team. 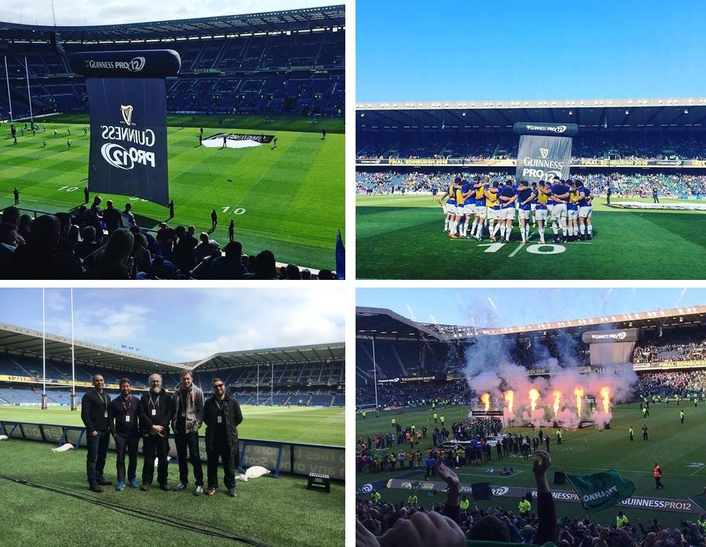 According to Luke Baudouin, event manager at Airstar UK, “Grooveyard trusted our Skyflags for such high profile events because they knew they would provide this wow factor. They are easy to deploy, provide a different type of entertainment and fill in stadia space perfectly.”
Measuring 12 metres long by 2.3 metres in diameter, the Skyflags were inflated with helium inside the stadium, and required only three people to pilot them from the ground with ropes.

The Airstar Skyflags are arguably the only solution capable of supporting such large and heavy flags (13kg) while in motion. The effect on spectators makes them increasingly popular for sports events.
A few days earlier in Lyon, France, the Parc Olympique Lyonnais hosted two European rugby finals: the Challenge Cup (Harlequins vs Montpellier HR) and the Champions Cup (Saracens vs Racing 92). Communications group Revolution 9 called the Airstar European Network (AEN) to provide two Skyflags (12x2.8m) in order to bring the pitch to life.

With the design of the stadium creating the perfect ambient conditions, only two operators were required per Skyflag with a third one on hand to deploy and fold back the flags. The only notable challenge came from the short turnaround time allowed to deploy the Skyflags before kick-off. Within a minute both were out on the pitch, providing a great visual experience and a tri-dimensional aspect to the show. 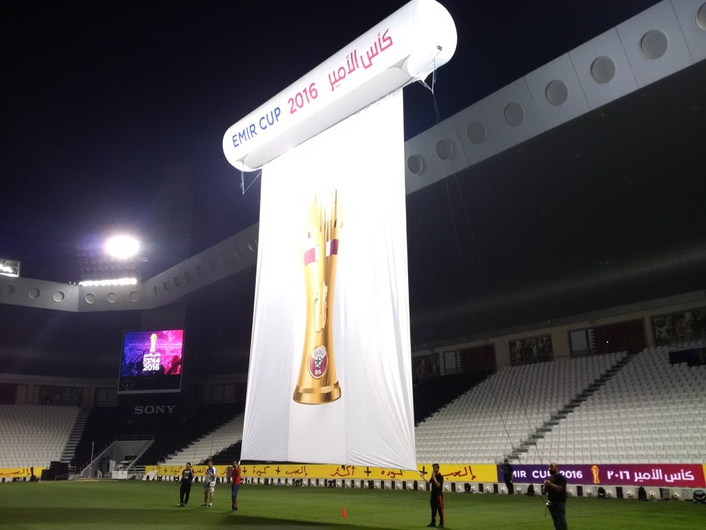 “The beauty of the Skyflag is that it is easily manoeuverable and therefore provides room for improvisation” notes AEN’s director David Mohen. “The operators, who were obviously rugby fans, got a bit carried away and participated in the celebrations with the players, following the winning team with the Skyflags for the lap of honour in front of a 58,000 crowd.”

About Airstar:
Established in 1994, Airstar is specialised in the design, manufacturing and distribution of inflatable structures and lighting balloons. An innovation source at the crossroads of lighting, design and technology, Airstar offers a range of products used by event and staging companies, rescue specialists, construction/safety workers in outdoor and underground environments, as well as the film and television industry. As an international company, Airstar is active in 40 countries through 12 subsidiaries and a network of independent distributors. Airstar invented the lighting balloon in 1994 and celebrated 20 years of existence in 2014