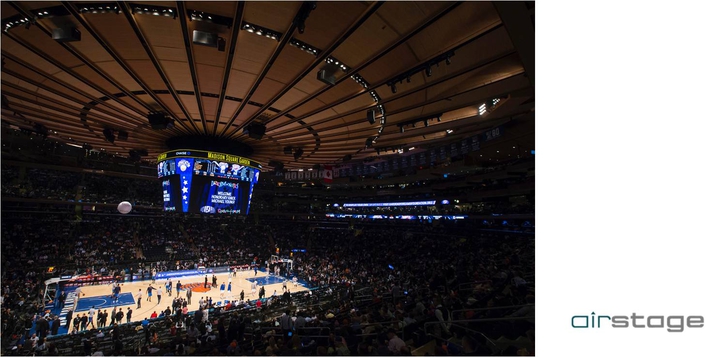 Mallorca, Spain- Airstage, the leading provider of ultra-light, radio controlled objects worldwide, is once again leading the industry with the introduction of the AirCamOrb, an Airstage AirOrb with an attached GoPro 4 camera. “The helium based AirCamOrb can be flown absolutely anywhere in an arena or stadium; there are no safety issues, unlike drones, which can’t be flown over the audience,” says John R. Barker, Head of Sales at Airstage.

The prototype of the AirCamOrb follows the same form as the Airstage AirOrb.  The diameter of the unit is 7.2 feet (220 cm), while the dead weight is approximately 14 lbs. (6.5 kg); once the AirCamOrb is inflated, the weight changes to under a pound. Current flight time is 45 minutes with a rechargeable battery; the GoPro camera is mounted at the bottom of the AirCamOrb. Barker notes, “The AirCamOrb is not limited like a spider cam or boom cam - it has absolutely no restrictions and can fly to any position--from the roof of the stadium to just above the heads of the players/performers or audience-- giving that unique special shot.”

The idea for the AirCamOrb came from Marc Bauman, Senior Vice President, Executive Producer, Creative and Technical Production Services Group at The Madison Square Garden Company New York; he saw flying orbs at a concert, and realized they could use the product at MSG for the New York Knicks and the New York Rangers. Bauman explains, “We saw these helium filled objects, and they initially impressed us as something we could use with the Knicks City Dancers.  Specifically, we wanted it to fly over the as the Knicks City Dancers performed, so that we could have a Busby Berkeley aerial shot.”

While researching the viability on his idea, Bauman realized that there were Airstage AirOrbs in service a mile away, at the Radio City Music Hall, during the Christmas Spectacular. That led him to Barker, who confirmed that it was indeed possible to add a camera to a standard AirOrb.  Bauman notes, “We talked about what we needed and how we needed to operate it. Eventually, we crossed all those t’s, dotted all those i’s and then they built two of them.” One is used live, while the other is a deflated backup unit. The setup time from deflated state to filling with helium and continuous flying time is approximately one hour. 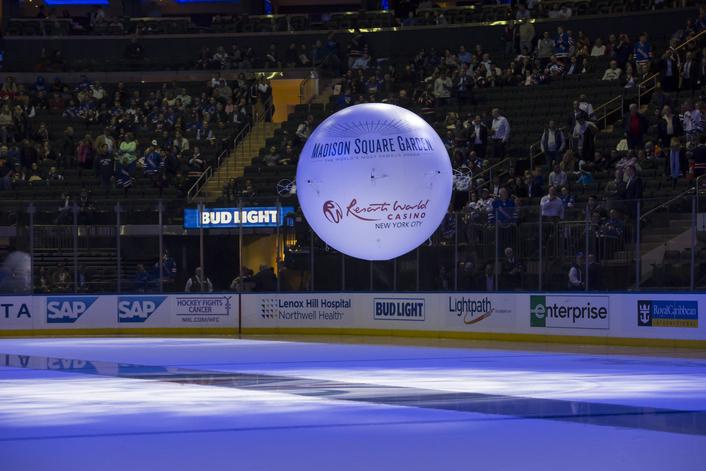 The video from the AirCamOrb is used on the venue’s GardenVision scoreboard, and has a discrete feed for the Madison Square Garden Television Network. “In terms of integration with our house system, there was no problem;  it literally worked right out of the box and it actually does more than I thought it could do,” Bauman reports.

All that Bauman needed to complete the process was a talented pilot; enter freelance drone camera pilot Jimmy Olivero of Skycam USA. “I’ve been operating remote controlled flying camera systems –drones-- for ten years now, and honestly, operating AirCamOne is lots of fun.  Fans gesture for me to get closer and when I do they are always dancing and cheering for their team whether it is the Knicks or the Rangers. NY sports fans have amazing passion, and I should know --I'm one of them,” Olivero says with a smile.

The fan response was fantastic. “We are thrilled that it gets the fans as engaged as they get. The fans wave at it and are excited that they’re going to be on camera, and even if they’re not on camera at the time, they’re waving at it.’ The AirCamOrb is actually so much fun,” Bauman adds. The AirCamOrb at Madison Square Garden is also branded; the sponsor is Resorts World Casino.

Like the companies widely popular AirOrb, the AirCamOrb can be customized. “Airstage can make other similar rounded shapes, such as mascots and products,  that can incorporate the camera system; special shapes take around 8-10 weeks to produce, while it takes about 6 weeks to produce a branded AirCamOrb,” says Barker.

The AirCamOrb premiered on October 13th, for the New York Rangers home opener, and has been delighting one of the most sophisticated audiences in the world since then. “At MSG, they call it  AirCamOne. Their tweets are at #AirCamOrb, but this is just the start;  there are a plethora of audience participation uses yet to be tapped” Barker notes.