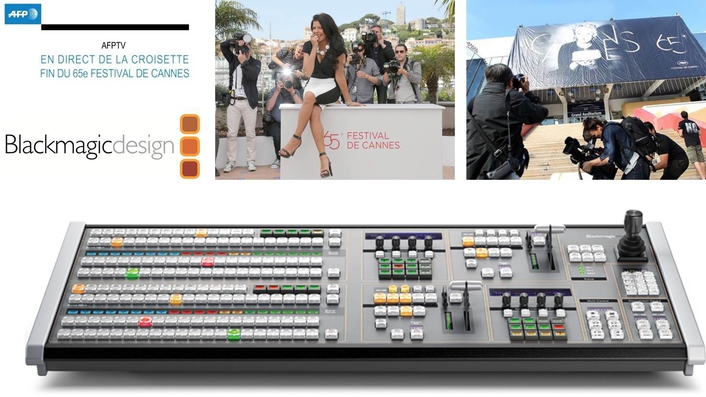 At the festival, television reporting teams from AFP captured the first reactions of winners and discussed the films that had been entered into the 2012 competition. Customers of AFP in Europe and the Middle East were fed a live HD broadcast feed from the AFP OB van via satellite, while fiber link was used to transmit the broadcast to those in Asia.

With the support of France based Atreid, AFP built its SNG van around Blackmagic Design’s Smart Videohub, which routed all incoming SD and HD signals. The upstream video signals to the van were converted from HD-SDI to fiber optic using Blackmagic Mini Converters, before content was fed into the ATEM 2 M/E Production Switcher.

Additionally, Blackmagic’s UltraStudio 3D Thunderbolt based capture and playback device, connected to a MacBook Pro and Final Cut Pro 7, was used by AFP to allow news teams to edit reports via the SNG van on location to broadcast time sensitive content as it happened.

“The addition of the audio mixer to the ATEM 2 M/E makes this a very powerful piece of kit given that space is always something of a premium. The small form factor, coupled with its intuitive design and broadcast quality features make this a very powerful and cost effective piece of technology,” concluded Tassel.