AES 2015: Lawo US Launch of KICK Close-Ball Automation and Many New Product Innovations

Lawo, a leading manufacturer of digital audio solutions and IP-based video routing and processing equipment, looks to redefine sports audio production with the US premiere of its revolutionary KICK close-ball automation at AES 2015 (Booth 519). Heightening the broadcast impact of major sporting events, this innovative technology takes the viewing experience to new levels of excitement by enhancing the depth and intensity of the audio while significantly reducing production effort.

Leveraging the latest image analysis and tracking systems, KICK’s unique, patent-pending, technology guarantees a consistent, fully-automated, high quality close-ball audio mix for sports such as American football, soccer and rugby. The system delivers transparent sound pickup with its excellent ‘kick-to-noise’ ratio significantly reducing ambient crowd noise. It also ensures a consistent audio level without noticeable fades for seamless inclusion in a broadcast mix that is 100% repeatable from match to match and highly accurate, even after 90 minutes of play.

KICK is available as a software-only solution for productions using Lawo mc² mixing consoles, as well as a hardware bundled solution based on Lawo’s new mc² Micro Core that interfaces with consoles from other manufacturers via MADI and RAVENNA/AES67. 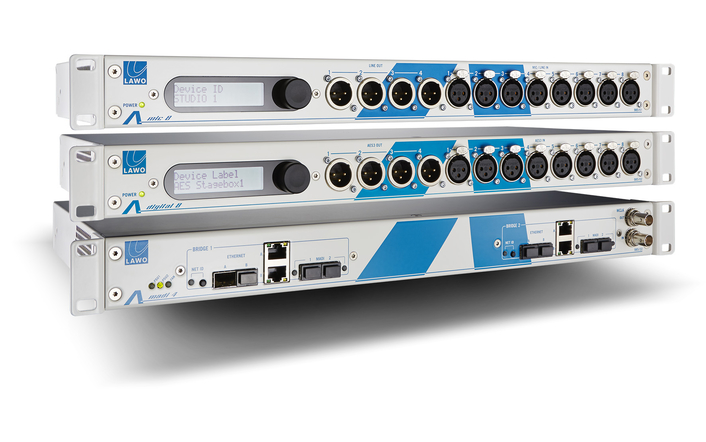 Lawo’s A__line family of high-quality Audio-to-IP interfaces for broadcast, live and install applications has expanded with the launch of the A__digital8 and A__madi4 in addition to Lawo’s established A__mic8. These compact rackmount devices are compatible with the AES67 audio-over-IP interoperability standard and make it easy to configure and manage audio and video streams in IP networks without requiring a deep understanding of IT systems. The A__mic8 features eight mic/line inputs and four line outputs, the A__digital 8 has eight AES3 inputs and four AES3 outputs, while the A__madi4 offers four MADI interfaces. All units offer two RAVENNA/AES67 Ethernet ports, eight GPIOs and require only a single cable for A__mic8 and A__digital8 PoE (Powered-over-Ethernet). 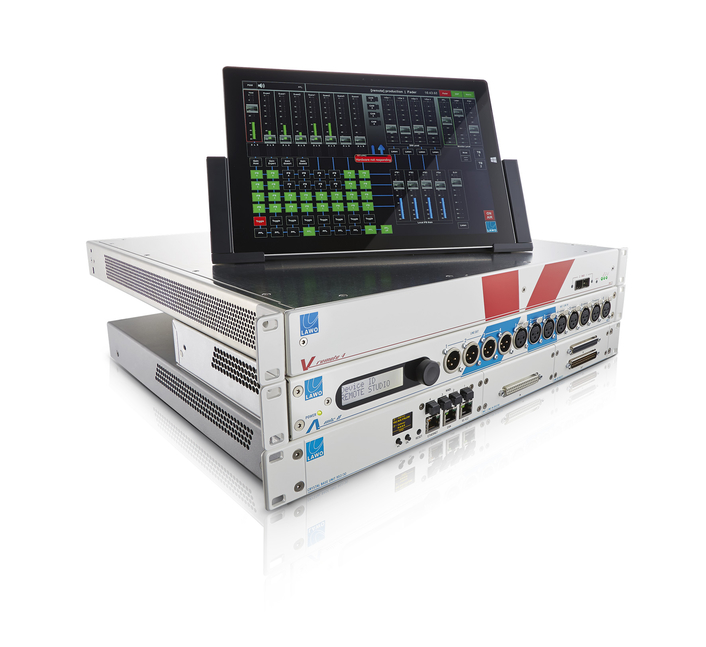 Also being showcased at AES is the powerful mc²56XT mixing console, which provides twice the number of faders in the same footprint as its mc²56 sibling, making the desk a unique choice in its class for trucks or studios where space is limited. The mc²56XT is natively equipped with RAVENNA/AES67 technology, and comes with the full Lawo broadcast production package including Audio-follow-Video, Automix, Up- and Downmix, and Loudness Metering.

Expanding the range of options for its full mc2 series audio consoles, Lawo recently announced a collaboration with WAVES that will have its US market rollout at AES. The result gives operators access to WAVES’ SoundGrid system, including a comprehensive plugin library allowing control of reverbs, multi-tap delays, graphic equalizers and multiband compressors directly from the console’s touchscreen, keyboard and rotary controls, with save and recall for entire sessions.

On the video side of things, Lawo now offers a range of innovative IP-based products designed specifically for live remote production. The new V__remote4 features seamless frame-accurate switching of SMPTE 2022-6 video with hitless merge and enhanced protection switching for higher operational redundancy. The complete V__line family of compact 19-inch/1RU Video-to-IP interfaces will also be on display. 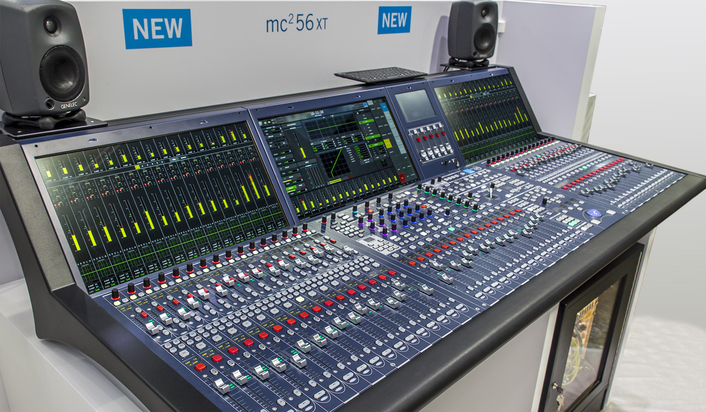 Lawo’s commitment to providing smart IP infrastructure offers close integration of audio with both video and control, to provide a complete solution for any workflow. The result is a new Plug & Play Remote Production Kit that marries the powerful new V_remote4 with fully-integrated video, audio and intercom transport and control capabilities (via qualified IP WAN connections) that support third-party video and audio equipment.

Mixing Master Class
Lawo, in conjunction with the DiMenna Center for Orchestral Recording, will offer a rare opportunity to a limited number of attendees to participate in a Master Class on mixing for orchestral and motion picture sound recording and live broadcast. This special event will include a hosted reception and facilities tour, followed by a presentation featuring Lawrence Manchester, audio mixer for the Tonight Show and the DiMenna Center for Orchestral Recording. This is limited availability event will take place Saturday evening, October 31 from 5:00 – 8:00 PM and is offered on a first-come-first-served basis.