Capturing Aerial Footage at Night in a City Center

Intuitive Aerial’s AERIGON UAV was used on a key action scene in Spectre, the latest addition to the James Bond movie franchise. Helicopter Film Services (HFS) flew its AERIGON just above the rooftops near Trafalgar Square in London as Bond, played by Daniel Craig, races up a fire escape. Easily lifting a 6K RED Dragon and Zeiss Master Prime lens, AERIGON provided the power and precision for ultra high resolution capture of the dramatic sequence. Together with the best production cameras and lenses, AERIGON allows today’s filmmakers to capture creative shots that often couldn’t have been achieved any other way.

“This shot could only have been filmed from the AERIGON,” said Jeremy Braben, aerial DP and founder of HFS. “The AERIGON allowed us to get close to the action, at night, in a restricted part of the city.”

The sequence required camera work just above the rooftops, too low for a helicopter to operate safely. HFS had to receive special permission from the Civil Aviation Authority (CAA) to fly because the scene was filmed at night and in the congested area of central London. 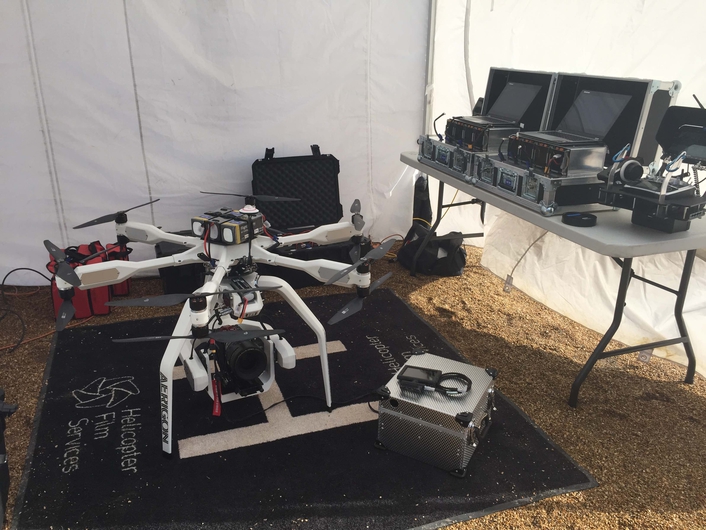 AERIGON offers a generous manufacturer-approved payload capacity of 35 lbs., which allows for over  20 lbs. of camera equipment, including lenses, along with the AERIGON gimbal and a proprietary advanced stabilization system. The aircraft features 12 powerful counter-rotating brushless motors. Sturdy, detachable legs provide a protective cage for the camera and lens and ensure soft landings after the shot. Intuitive Aerial’s DOMINION gimbal controller allows for full camera controls, including FIZ (focus, iris, zoom), while AERIGON is in flight.

HFS has previously used AERIGON on other feature films, including Into the Woods and Avengers: Age of Ultron. Directed by Sam Mendes, and starring Daniel Craig, Christoph Waltz, and Ralph Fiennes, Spectre saw theatrical release Nov. 6. 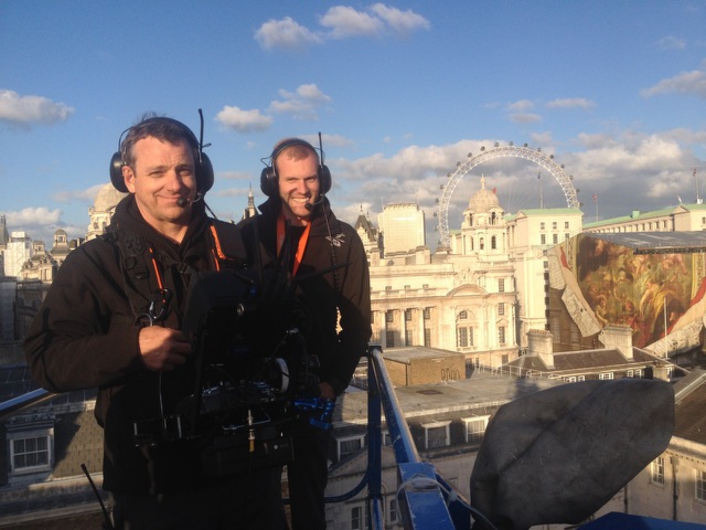 Jeremy Braben and Pete Ayriss of HFS on set at Spectre

About Intuitive Aerial Inc.
Intuitive Aerial is an international manufacturer of professional remote camera systems for high-end cinema and broadcast applications. The company makes the AERIGON, the industry’s first remote piloted aerial camera platform (UAV) for professional cinema, broadcast, and commercials productions. The AERIGON has been trusted to fly cameras on feature films such as Into the Woods and Avengers: Age of Ultron and on broadcasts such as BBC’s nature doc series One Planet. It also manufactures the NEWTON, a stabilized remote camera head for broadcast applications. Both remote camera systems are controlled by the Intuitive Aerial DOMINION controller. The company provides certification assistance and flight training for its customers worldwide. Intuitive Aerial Inc. is located in Woodland Hills, CA.