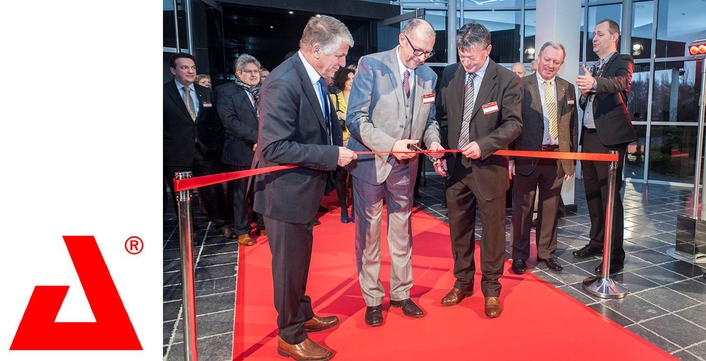 .
On February 27th  Glenn Roggeman (CEO AED group) cut the ribbon for the opening of the AED studios in the presence of numerous  prominent guests from  the political - as well as corporate scene.

In August 2013, the Eurocam Media Center - formerly known as the Alfacam Studios, changed ownership  after  the acquisition by the AED group.

On October 1st, Glenn Roggeman officially started phase 1 of his master plan, “the update” of the studios. During the last five months, neither cost nor effort was spared for this prestigious project.  Today, many waste containers, renovations and innovations later, determined entrepreneurship already shows its result. 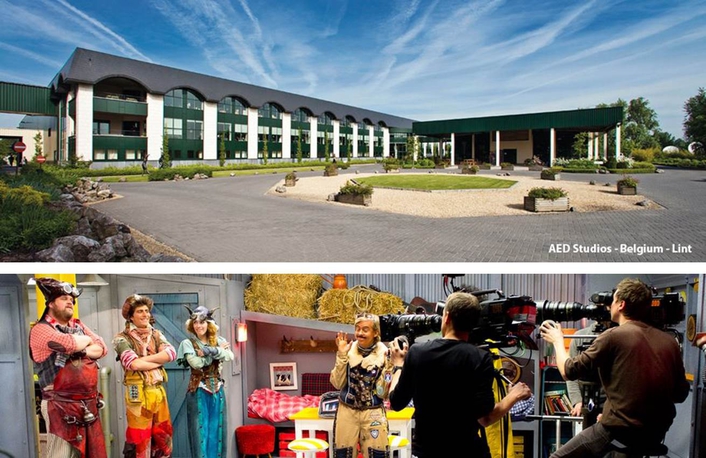 16 studios, of which 5 have been fully fitted with the most recent lighting-, sound- and video equipment, having a target audience: the TV- and Event industry.

7 Studios were equipped with Technical ceilings (Trusses and Hoists) to enable TV- and Film production companies much faster set-up and building times.

4 Studios are “Black Boxes”, to be used and equipped to the specifications of the relative production it is being used for.

Due to the permanently installed technical infrastructure, production companies will need less transport, resulting in much shorter load-in and load-out times and a drastic reduction of energy consumption! 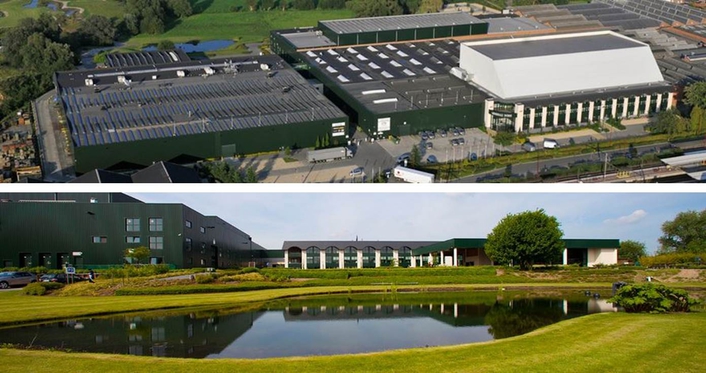 The AED Studios have grown into one of the largest media complexes in the Benelux. With a total surface area of 55,000 m² it currently houses 45,000 m² of multi-functional areas: film studios, storage rooms, warehouses, offices, meeting rooms, lecture rooms, restaurant, rehearsal rooms etc. Besides the breadth and versatility of the AED Studios it also benefits from being situated in green surroundings. Indeed even during the development of the site, extreme care was taken to ensure the preservation of the natural surroundings and blending in the modern infrastructure.

The AED Studios buildings are characterized by their modernity and multi-functionality. And the large Film & TV studios are also ideally suited to host exhibitions and events. However it is not only temporary projects that find a home here but also complex projects and on-going business activities. With a surface area of 55.000m² the AED Studios offers a multitude of possibilities: 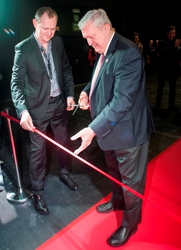 Also on 27 February visualization expert Barco and AED Studios officially inaugurated 'Barco Virtual World', a virtual experience events hall at the site of AED Studios in Lint, Belgium. The 1.000m2 hall is equipped with ten of Barco's high-brightness HDX-W20 projectors and a 90-meter long screen - the largest in the Benelux - to provide an immersive virtual experience in full HD. As a technical partner of Barco Virtual World, Barco is happy to help AED Studios to push the limits of projection and corporate event infrastructure to create a unique experience for AED's customers.

"The studios perfectly complement our rental, sales, repair, logistics and leasing businesses," says Glen Roggeman, CEO of AED Studios. "When buying the studios, we immediately dreamt of converting one of the halls into a unique 'Virtual experience' space, in order to underscore our commitment to state-of-the-art AV technology. It was only logical to team up with Barco, the world leader in projection technology."

As a technical partner to the project, Barco will provide AED Studios with visualization equipment, including HDX-W20 projectors, LCD displays and digital signage media servers. The projectors, which each offer 20,000 lumens of light output, project images onto a 90-meter-long screen with a total of 17,000 pixels.

Thierry Heldenbergh, Managing Director of AED Display: “The set-up allows us to offer highly immersive projection at the highest possible resolution. Consequently, Barco Virtual World is the ideal location for organizers of corporate events, congresses, meetings, live television programs, etc. who are looking for ways to provide an out-of-the-ordinary experience. They can use either our standard HD content or shoot their own images and display these - either way, they’re sure to leave the audience in awe.”

About AED group
AED Rent was established in Belgium in 1986 as a dry-hire rental company for sound and lighting. Today, the AED group (AED Rent, AED Display, AED Distribution, AED Store, AED Lease, AED Second Hand and AED Studios) is one of Europe's key market players. It provides the professional AV industry with light, sound and video equipment, including accessories, for rent or for sale (new and second-hand), and also offers related repair, logistics and leasing services. To cater to the diverse needs of its customers, the AED group has an impressive range of high-quality equipment in stock - 35,000+ products -, including Barco projectors and image processing equipment.