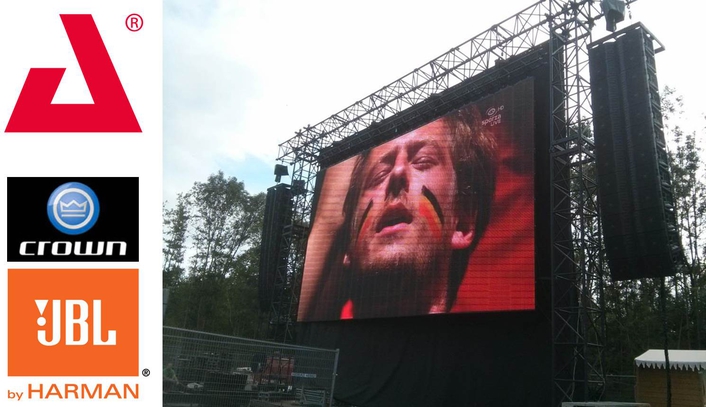 .
HARMAN’s JBL Professional and Crown amplifiers continue to be a rousing success in Europe, as Belgium-based AV rental system provider AED Rent delivers a new level of sound quality to festivals and tours across the continent with its inventory of JBL’s next-generation VTX line arrays and Crown I-Tech HD amps.

From Turkey to the Netherlands, from heavy metal to hardcore house, AED Rent is harnessing the power of the revolutionary VTX Series to confirm itself as a market leader and total system provider throughout Europe. All systems have been/will be controlled, configured and monitored with JBL HiQnet Performance Manager™ providing a deliberately consistent user experience for the operator as they move from one system to another.

“The VTX Series is setting a new standard for concertgoers across Europe,” said Piet Verstraete, Sound Engineer/Account Manager for AED Rent, which signed on as the first adopter of JBL’s VTX V25 loudspeakers and as a Strategic Partner in the VTX Network in 2012. “We signed on as a Strategic Partner two years ago because we recognize revolutionary quality when we see and hear it. This summer it’s been very gratifying to enable the producers of the festivals and tours that have rented from us to expose thousands of fans across Europe to the experience that’s only possible with the quality of JBL and Crown.”

Events across Europe that have included VTX loudspeakers in the audio lineup include:
·    Graspop Metal Meeting, known as the hardest festival in Belgium, took place in late June. In addition to sets by a range of acts that included Alice in Chains, Limp Bizkit and Soundgarden, the festival featured a Classic Rock Café and DJ sets. KO-sound delivered the audio through two columns of eight V25 loudspeakers that were supplemented by 16 S28 subs. Crown I-Tech 4x3500HD amplifiers featuring DriveCore™ technology powered the entire system.

·    This year’s Rock@Field, Luxembourg Open Air festival, a 3-day/night music and camping extravaganza, blended local and global talent by including 10 local bands in a lineup that featured international acts such as Kings of Leon, Alice in Chains and Triggerfinger. To provide a quality of sound that matched the festival, EML/PRG Productions used two columns of 16 V25 loudspeakers supplemented by two columns of 12 S28 subs. Crown I-Tech 4x3500HD amplifiers featuring DriveCore powered the entire system.

·    This year marks the 15th anniversary of the Reggae Sundance Festival, a 2-day reggae and camping gathering scheduled for the weekend of August 9–10 in Liempde, The Netherlands. The lineup includes acts such as Kabaka Pyramid, Dillinger & Trinity and Jesse Royal. To provide festival attendees with the best sound experience possible, KO-sound will provide two columns of 12 V25 loudspeakers supplemented by two columns of 12 S28 subs. Crown I-Tech 4x3500HD amplifiers featuring DriveCore will power the V25 loudspeakers, while I-Tech 12000HD amplifiers will power the S28 subs.

·    At the end of June, football and music came together at Dance with the Devils, held at Sportpaleis in Antwerp, where Belgian fans cheered their teams and enjoyed music provided by a lineup of live artists and DJs. EML/PRG Productions managed the sound for the facility, installing a configuration that consisted of two columns of 16 V25 loudspeakers supplemented by two columns of 12 S28 subs. Crown I-Tech 4x3500HD amplifiers powered the V25 loudspeakers, while I-Tech 12000HD amplifiers powered the S28 subs.

·    In mid-July, Metallica performed to an enthusiastic and energetic audience at the Istanbul Technical University (ITU) Stadium in Istanbul, Turkey. In addition to its own inventory, Altincizme Elektronik supplemented the sound with 16 S28 subs from AED Rent. Crown I-Tech 12000HD amplifiers powered the entire system.

·    In early August, the Loveland Festival comes to Sloterpark in Amsterdam with a lineup that includes Adam Beyer, Maceo Plex, Sasha, Arjuna Schiks and Oliver Koletzki. To supplement its own system, EML/PRG Productions Holland is equipping each stage with 24 S28 subs. Crown I-Tech 4x3500HD amplifiers powered the entire system.

·    Launched in 1985, Pukkelpop began as a small, local music event organized by Leopoldsburg’s “Young Humanists” near the city of Hasselt, Belgium. Today, with its three days of musical acts chosen from the alternative fringe, Pukkelpop is considered one of Europe’s greatest musical gatherings. For the mid-August event, EML/PRG Productions selected 60 S28 subs for the Boilerroom stage and 26 S28 subs for the Marquee stage. Crown I-Tech 12000HD amplifiers powered the entire system.

·    Nightmare 2.0 isn’t about bad dreams: It’s a festival of “hardcore” DJs held in Rotterdam at the end of June. With a lineup representing the unique sounds from an impressive number of cities and regions worldwide, sound quality is everything for this event’s audience. To deliver on those expectations, First Love Sound & Light Concepts selected 40 V25 loudspeakers and 32 S28 subs for use across the event’s multiple stages. Crown I-Tech 4x3500HD amplifiers powered the V25 loudspeakers, while I-Tech 12000HD amplifiers powered the S28 subs.