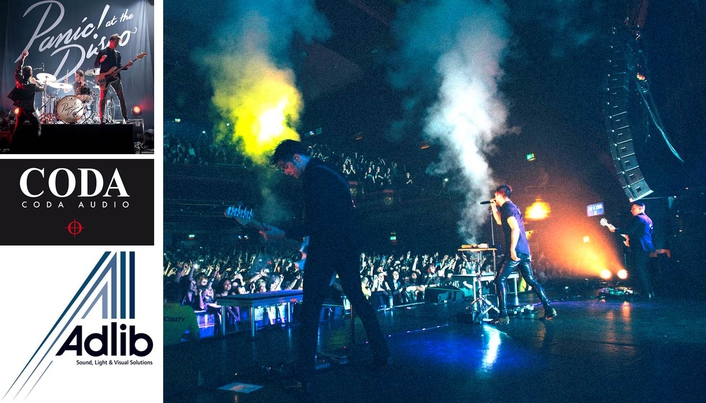 .
Adlib’s busy audio division renewed their working relationship with Las Vegas alt rockers Panic! At The Disco for their recent UK and European live shows. This dates back to 2006 when Adlib hooked up with them for the first time in Manchester. The Liverpool based technical production company have worked with the band on their various UK shows ever since!

They took a Coda Audio sound system from Adlib into their three largest UK shows at Manchester O2 Apollo, London’s Eventim Apollo Hammersmith and Wolverhampton Civic Hall. A basic lighting package for LD Alex Specht was also sourced from Adlib to add to their touring lighting and visuals package.

The audio elements were looked after on the road by Adlib’s PA Technicians George Puttock and Sam Proctor with Marc Peers and Michael Flaherty as Monitor Technicians.

The Coda system – fast becoming a favourite choice for touring and theatre applications of all types – was specified by Adlib’s Dave Jones in consultation with Spencer Jones – primarily because it was lightweight and delivered a great sound – taking the band’s power and vibrancy right out into all corners of the venues.

In its largest configuration, the left and right hangs comprised 12 x Coda Airline LA12s per side with 3 x Coda SC3 15 inch low-frequency extension boxes flown at the top of each array … for an additional punch.

Puttock explained that they used the SC3s on a tour with Ellie Goulding in March in a similar style with great success in making an array sound much larger!

All the speakers were driven by Coda’s C10 amps and processed via one of Adlib’s standard Lake LM 26 /  LM44 racks, Dante enabled with a fibre backbone.

Adlib supplied 2 x Avid Profile consoles complete with stage boxes which were specified by both engineers.

Says Puttock, “Coda is really one of the top systems available right now in my opinion. It is ahead of all the other brands in terms of technology as well as delivering a fantastically solid ‘real’ sound that throws an exceptionally long way due to the flat waveform emitted by the advanced driver technology”.

The band’s lighting rig was supplemented by Adlib with front and back Prolyte H40v black truss. The front truss had two bars of 6 way Par 64s and four 4-cell Moles. The back truss supported the band’s touring video wall along with a black drape.

Adlib Account Manager Phil Kielty comments, “It was a real pleasure for Adlib to work with Panic! At The Disco again. Eight years is a long relationship in this industry at the moment and we are really proud to still be involved with the band. There is a real family atmosphere amidst the crew, we all got along so well & strived to get the very best results live for the band. The show is really energetic and sounded amazing through the Coda system. It looked really cool as well, so there were lots of very happy people!”